Book Talk on Living on Almost Nothing in America

Book Talk on Living on Almost Nothing in America 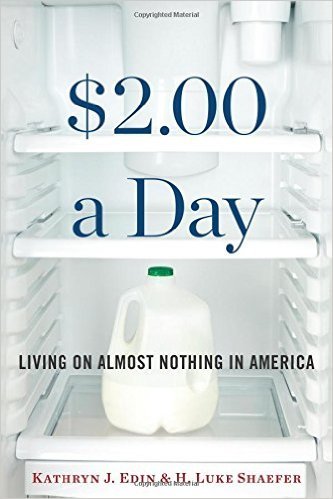 Public Books and The Institute for Public Knowledge invite you to a book talk for $2.00 a Day: Living on Almost Nothing in America. The authors Kathryn Edin and Luke Shaefer will be in conversation with Jonathan Murdoch and Sudhir Venkatesh.

After two decades of groundbreaking research on American poverty, Kathryn Edin noticed something she hadn’t seen before — households surviving on virtually no cash income. Edin, whose deep examination of her subjects’ lives has “turned sociology upside down” (Mother Jones), teamed with Luke Shaefer, an expert on surveys of the incomes of the poor. The two made a surprising discovery: the number of American families living on $2.00 per person, per day, has skyrocketed to one and a half million American households, including about three million children.

But the fuller story remained to be told. Where do these families live? How did they get so desperately poor? What do they do to survive? In search of answers, Edin and Shaefer traveled across the country to speak with families living in this extreme poverty. Through the book’s many compelling profiles, moving and startling answers emerge: a low-wage labor market that increasingly fails to deliver a living wage, and a growing but hidden landscape of survival strategies among America’s extreme poor. Not just a powerful exposé, $2.00 a Day delivers new evidence and new ideas to our national debate on income inequality.

Kathryn Edin is the Bloomberg Distinguished Professor in the Department of Sociology, Zanvyl Krieger School of Arts and Sciences and Department of Population, Family, and Reproductive Health, at the Bloomberg School of Public Health. She received her Ph.D. in sociology from Northwestern University in 1991 and has taught at Rutgers University, Northwestern University, the University of Pennsylvania, and, most recently, Harvard University as a Professor of Public Policy and Management. She is a founding member of the MacArthur Foundation-funded Network on Housing and Families with Young Children and a past member of the MacArthur Network on the Family and the Economy. In 2014 she became a member of the National Academy of Sciences and the American Academy of Political and Social Sciences.

Luke Shaefer is an associate professor at the University of Michigan School of Social Work and Gerald R. Ford School of Public Policy, and a research affiliate of the National Poverty Center. He received his doctoral degree at the School of Social Service Administration at the University of Chicago. Luke’s work in the academic and public realm focuses on how we can make the U.S. social safety net as effective as possible at serving low-income families with children. His research has been widely published, and cited in such media outlets as The New York Times, National Review, USA Today, and The Washington Post.

Jonathan Morduch is Professor of Public Policy and Economics at the NYU Wagner Graduate School of Public Service, and Managing Director of the Financial Access Initiative, a consortium of researchers focused on financial inclusion. His research centers on microfinance, social investment, and the economics of poverty. He is currently developing a theoretical framework with Jonathan Conning for understanding how governments and philanthropists can use market forces to create social change. Morduch is co-author of Portfolios of the Poor: How the World’s Poor Live on $2 a Day (Princeton 2009) and The Economics of Microfinance (MIT Press 2005, 2nd edition 2010). He has taught on the Economics faculty at Harvard University, and has held visiting positions at Stanford, Princeton, and the University of Tokyo. Morduch has worked with the United Nations and World Bank, and advises global NGOs.

Sudhir Venkatesh is the William B. Ransford Professor of Sociology, and the Committee on Global Thought, at Columbia University. He is the author of several books, including Gang Leader for a Day, Off the Books: The Underground Economy of the Urban Poor, and American Project: The Rise and Fall of a Modern Ghetto. His editorial writings have appeared in The New York Times, the Chicago Tribune, and the Washington Post. He writes for Slate.com and his stories have appeared in This American Life, WIRED, and on National Public Radio. His next book, under contract with Penguin Press, will focus on therole of black market economies—from sex work and drug trafficking to day care and entertainment—in the revitalization of New York since 1999.