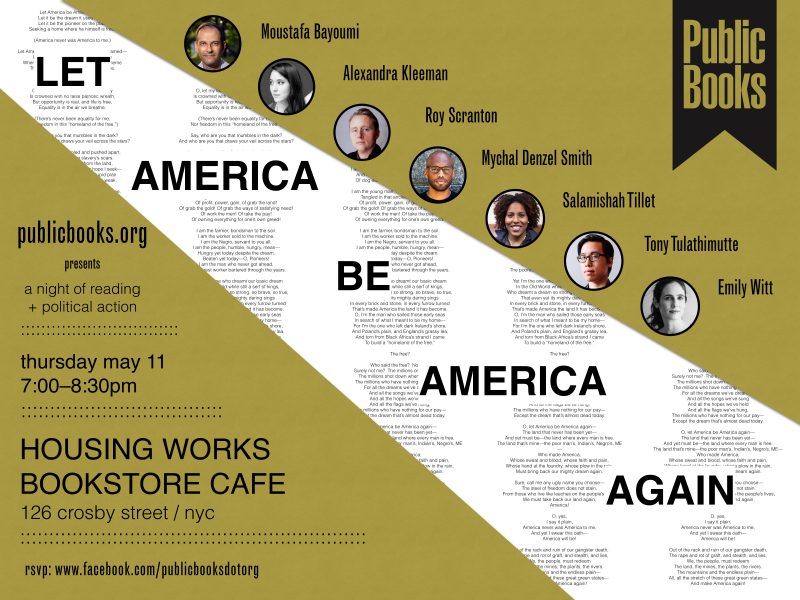 Join Public Books at Housing Works Bookstore Cafe in Soho for an evening of rousing readings and political action. Moustafa Bayoumi, Alexandra Kleeman, Roy Scranton, Mychal Denzel Smith, Salamishah Tillet, Tony Tulathimutte, and Emily Witt will read passages by their favorite authors, past and present, that help us envision a better America. After the readings, stay for drinks and a postcard-writing session, where you can send quotes from the readings (or from your own favorite books) to your representatives.

MOUSTAFA BAYOUMI
is the author of two award-winning books: “How Does It Feel To Be a Problem?: Being Young and Arab in America” (Penguin Press, 2008), and “This Muslim American Life: Dispatches from the War on Terror” (NYU Press, 2015). A professor at Brooklyn College (CUNY), Bayoumi also writes a column for The Guardian.

ALEXANDRA KLEEMAN
is a writer of fiction and nonfiction, and the 2016 winner of the Bard Fiction Prize. Her work has been published in The New Yorker, The Paris Review, Harper’s, The New Yorker, VOGUE, and n+1. She is the author of the debut novel “You Too Can Have A Body Like Mine” and “Intimations” (Harper, 2016), a short story collection. She lives in Staten Island.

MYCHAL DENZEL SMITH
is the New York Times bestselling author of “Invisible Man, Got the Whole World Watching,” and a 2017 NAACP Image Award nominee. His work has appeared in print and online in the New York Times, Washington Post, Complex, GQ, The Atlantic, The Nation, Ebony, and many other publications. He has been a featured commentator on NPR, MSNBC, and more national radio and television programs.

SALAMISHAH TILLET
is an associate professor of English and Africana Studies at the University of Pennsylvania. She is the author of “Sites of Slavery: Citizenship and Racial Democracy in the Post-Civil Rights Imagination” and is currently working on a book on the civil rights icon Nina Simone. In 2003, she and her sister Scheherazade Tillet co-founded A Long Walk Home, a Chicago-based nonprofit that uses art to educate and empower young people to end violence against girls and young women.

TONY TULATHIMUTTE
is the author of “Private Citizens,” which was called “the first great millennial novel” by New York Magazine. A graduate of Stanford University and the Iowa Writers’ Workshop, he has written for the New York Times, VICE, the New Yorker, The Atlantic, the New Republic, n+1, Playboy, and the Paris Review, and received a 2017 Whiting Award, an O. Henry Award, and a MacDowell Fellowship.

EMILY WITT
is the author of “Future Sex” (FSG, 2016). She has written for the New York Times, the New Yorker, and many other places.