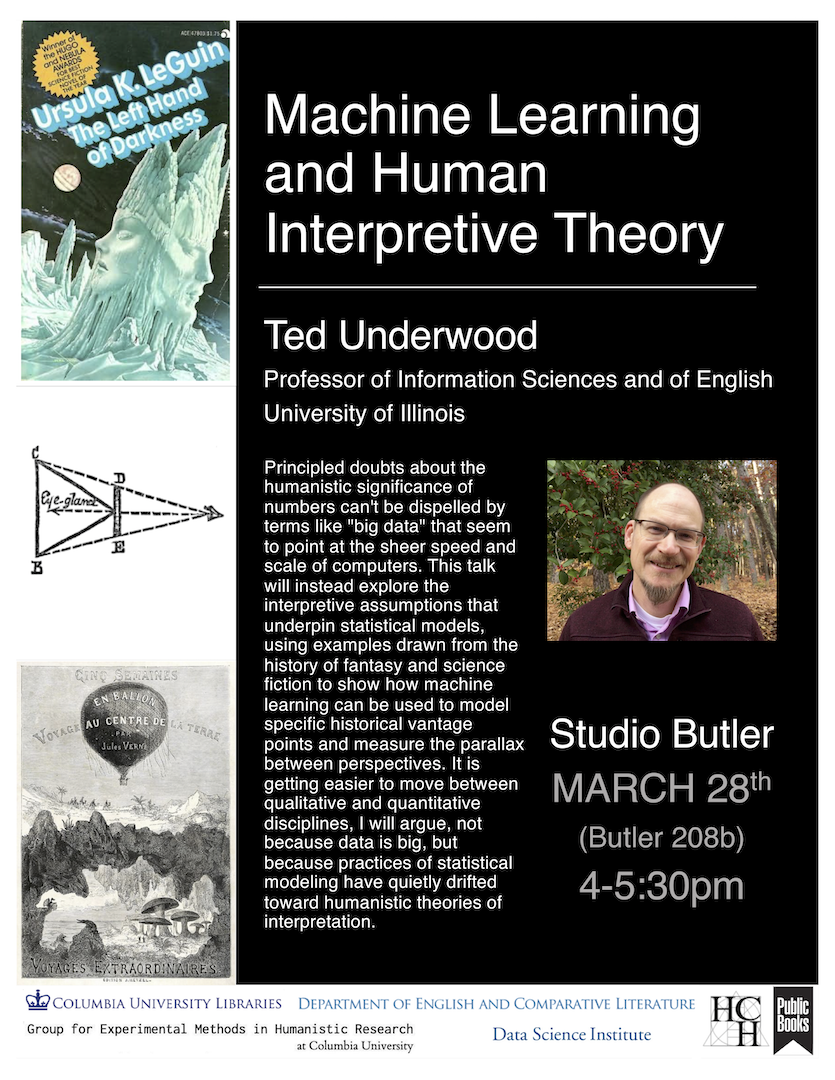 The boundary between the humanities and quantitative social sciences has become permeable lately. But principled doubts about the humanistic significance of numbers can’t be dispelled by terms like “big data” that seem to point at the sheer speed and scale of computers. This talk will instead explore the interpretive assumptions that underpin statistical models, using examples drawn from the history of fantasy and science fiction to show how machine learning can be used to model specific historical vantage points and measure the parallax between perspectives. It is getting easier to move between qualitative and quantitative disciplines, I will argue, not because data is big, but because practices of statistical modeling have quietly drifted toward humanistic theories of interpretation.

Ted Underwood is a Professor of Information Sciences and of English at University of Illinois. His research considers how we can use information science as literary criticism, particularly in the application of machine learning to large digital collections. His most recent book, Digital Horizons: Digital Evidence and Literary Change, published this year by the University of Chicago Press, uses the data of newly available digital libraries to deepen our understanding of the large arcs of archives and literary change. He is also the author of Why Literary Periods Mattered: Historical Contrast and the Prestige of English Studies (Stanford University Press, 2013) and The Work of the Sun: Literature, Science, and Political Economy, 1760-1860 (Palgrave, 2005). His articles have appeared in numerous journals, including Digital Humanities Quarterly, Modern Language Quarterly, Cultural Analytics, Big Data and Society, Association for Computational Linguistics, New Literary History, Representations, and Journal of Digital Humanities. He has been awarded grants from the National Endowment of the Humanities, American Council of Learned Societies, and the Center for Advanced Study at University of Illinois Urbana-Champaign.