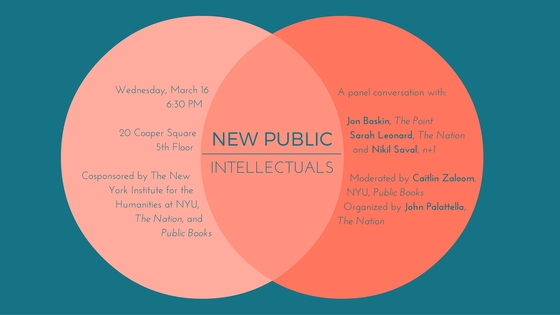 Graduate students contribute art and reviews to many major journals of ideas and politics, both in print and online—a phenomenon that has existed for many years. What is new is the extent to which students are involved in launching and sustaining a host of new publications that are also part of the current renaissance in cultural journalism: n+1, The New Inquiry, Jacobin, Public Books, and The Point, among others. While students wrote for pioneering publications such as Lingua Franca, The Baffler, and Feed during the last flourishing of a journalism of ideas in the mid- to late 1990s, they didn’t aspire to found publications of their own.

“New Public Intellectuals” will look at the place of graduate students in this current revival and assess their status in relation to the academy and to journalism. Given the precariousness of the job market in both academia and journalism, why do graduate students opt to have a foot in these two realms? What do they see are the benefits, and to what extent do they see their interventions in both realms as correctives? What are their intellectual and journalistic aspirations? How in particular have they been influenced by the shortcomings of graduate study in the humanities, or of scholarship in the humanities more generally, or of ideas journalism?

Free and open to the public; RSVP required. To RSVP, please send an email to nyih.info@nyu.edu with the subject “RSVP NEW PUBLIC INTELLECTUALS” and your first and last name in the body of the email.

Cosponsored by the New York Institute for the Humanities at NYU, The Nation, and Public Books.