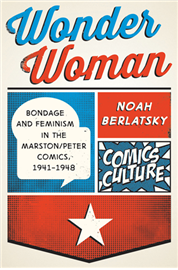 William Marston was an unusual man—a psychologist, a soft-porn pulp novelist, more than a bit of a carny, and the (self-declared) inventor of the lie detector. He was also the creator of Wonder Woman, the comic that he used to express two of his greatest passions: feminism and women in bondage.

Comics expert Noah Berlatsky takes us on a wild ride through the Wonder Woman comics of the 1940s, vividly illustrating how Marston’s many quirks and contradictions, along with the odd disproportionate composition created by illustrator Harry Peter, produced a comic that was radically ahead of its time in terms of its bold presentation of female power and sexuality. Himself a committed polyamorist, Marston created a universe that was friendly to queer sexualities and lifestyles, from kink to lesbianism to cross-dressing. Written with a deep affection for the fantastically pulpy elements of the early Wonder Woman comics, from invisible jets to giant multi-lunged space kangaroos, the book also considers how the comic addressed serious, even taboo issues like rape and incest.

Wonder Woman: Bondage and Feminism in the Marston/Peter Comics, 1941–1948 reveals how illustrator and writer came together to create a unique, visionary work of art, filled with bizarre ambition, revolutionary fervor, and love, far different from the action hero symbol of the feminist movement many of us recall from television.

Noah Berlatsky is the editor of the comics and culture blog The Hooded Utilitarian. He has written on gender, comics, and culture for many publications, including Slate, Public Books, The Chicago Reader, Reason, The Comics Journal, The Baffler, and The Atlantic.

Sharon Marcus is Dean of Humanities and the Orlando Harriman Professor of English and Comparative Literature at Columbia University. She is the author of Apartment Stories: City and Home in Nineteenth-Century Paris and London and the prize-winning Between Women: Friendship, Desire, and Marriage in Victorian England. A founder and Co-Editor in Chief of Public Books, she is currently finishing a book about theatrical celebrity in the 19th century.