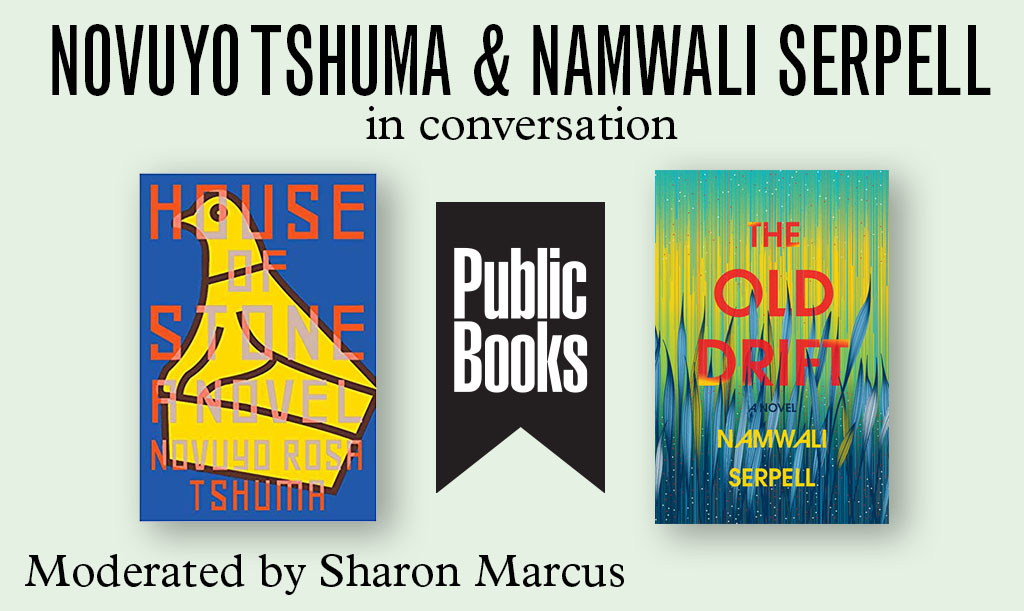 Join us to celebrate the recent novels from two promising voices in African fiction, House of Stone by Novuyo Rosa Tshuma and The Old Drift by Namwali Serpell.

You are warmly invited to join the two authors in conversation, moderated by Public Books Co-Editor-in-Chief Sharon Marcus.

In the chronic turmoil of modern Zimbabwe, Abednego and Agnes Mlambo’s teenage son, Bukhosi, has gone missing, and the Mlambos fear the worst. Their enigmatic lodger, Zamani, seems to be their last, best hope for finding him. Since Bukhosi’s disappearance, Zamani has been preternaturally helpful: hanging missing posters in downtown Bulawayo, handing out fliers to passersby, and joining in family prayer vigils with the flamboyant Reverend Pastor from Agnes’s Blessed Anointings church. It’s almost like Zamani is part of the family…

But almost isn’t nearly enough for Zamani. He ingratiates himself with Agnes and feeds alcoholic Abednego’s addiction, desperate to extract their life stories and steep himself in borrowed family history, as keenly aware as any colonialist or power-mad despot that the one who controls the narrative inherits the future. As Abednego wrestles with the ghosts of his past and Agnes seeks solace in a deep-rooted love, their histories converge and each must confront the past to find their place in a new Zimbabwe.

Pulsing with wit, seduction, and dark humor, House of Stone is a sweeping epic that spans the fall of Rhodesia through Zimbabwe’s turbulent beginnings, exploring the persistence of the oppressed in a young nation seeking an identity, but built on forgetting.

1904. On the banks of the Zambezi River, a few miles from the majestic Victoria Falls, there is a colonial settlement called The Old Drift. In a smoky room at the hotel across the river, an Old Drifter named Percy M. Clark, foggy with fever, makes a mistake that entangles the fates of an Italian hotelier and an African busboy. This sets off a cycle of unwitting retribution between three Zambian families (black, white, brown) as they collide and converge over the course of the century, into the present and beyond. As the generations pass, their lives—their triumphs, errors, losses and hopes—emerge through a panorama of history, fairytale, romance and science fiction.

From a woman covered with hair and another plagued with endless tears, to forbidden love affairs and fiery political ones, to homegrown technological marvels like Afronauts, microdrones and viral vaccines, this gripping, unforgettable novel is a testament to our yearning to create and cross borders, and a meditation on the slow, grand passage of time.

Namwali Serpell is a Zambian writer who teaches at the University of California, Berkeley. She won the 2015 Caine Prize for African Writing. She received a Rona Jaffe Foundation Writers’ Award for women writers in 2011 and was selected for the Africa39, a 2014 Hay Festival project to identify the best African writers under 40. Her first book of literary criticism was called Seven Modes of Uncertainty (Harvard UP, 2014). Her first novel, The Old Drift (Hogarth/PRH, 2019), has been long listed for the Center for Fiction First Novel Prize.

Novuyo Rosa Tshuma is the author of the novel House of Stone, winner of the 2019 Edward Stanford Travel Writing Award for Fiction with a Sense of Place and the 2019 Bulawayo Arts Award for Outstanding Fiction, shortlisted for the 2019 Orwell Prize for Political Fiction and the 2019 Dylan Thomas Prize, and longlisted for the 2019 Rathbones Folio Prize. She has been invited to give public lectures about House of Stone at Oxford University and the Nordic Africa Institute. In 2017, she received the Rockefeller Foundation’s prestigious Bellagio Center Literary Arts Residency Award for her work. Her collection, Shadows, was published by Kwela in South Africa to critical acclaim and won the 2014 Herman Charles Bosman Prize. A graduate of the Iowa Writers’ Workshop, she is a native of Zimbabwe and has lived in South Africa and the USA. Novuyo serves on the Editorial Advisory Board and is an editor at The Bare Life Review, a journal of refugee and immigrant literature in based in California.

Sharon Marcus is professor of English and Comparative Literature at Columbia University, editor in chief of Public Books, and the author, most recently, of The Drama of Celebrity (Princeton University Press, 2019).