Panel Discussion on Money in Politics with Zephyr Teachout

Panel Discussion on Money in Politics with Zephyr Teachout 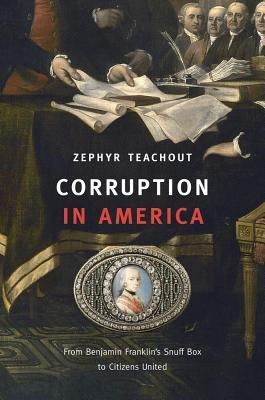 Public Books and the Institute for Public Knowledge invite you to a panel discussion with Zephyr Teachout, recent gubernatorial candidate and author of Corruption in America; Thomas Frank, Salon columnist and author of What’s the Matter with Kansas?; and Mansur Gidfar, communications director of Represent.Us.

When Louis XVI presented Benjamin Franklin with a snuff box encrusted with diamonds and inset with the King’s portrait, the gift troubled Americans: it threatened to “corrupt” Franklin by clouding his judgment or altering his attitude toward the French in subtle psychological ways. This broad understanding of political corruption—rooted in ideals of civic virtue—was a driving force at the Constitutional Convention.

For two centuries the framers’ ideas about corruption flourished in the courts, even in the absence of clear rules governing voters, civil officers, and elected officials. Should a law that was passed by a state legislature be overturned because half of its members were bribed? What kinds of lobbying activity were corrupt, and what kinds were legal? When does an implicit promise count as bribery? In the 1970s the US Supreme Court began to narrow the definition of corruption, and the meaning has since changed dramatically. No case makes that clearer than Citizens United.

In 2010, one of the most consequential Court decisions in American political history gave wealthy corporations the right to spend unlimited money to influence elections. Justice Anthony Kennedy’s majority opinion treated corruption as nothing more than explicit bribery, a narrow conception later echoed by Chief Justice Roberts’s decision in McCutcheon v. FEC in 2014. With unlimited spending transforming American politics for the worse, warns Teachout, Citizens United and McCutcheon were not just bad law but bad history. If the American experiment in self-government is to have a future, then we must revive the traditional meaning of corruption and embrace an old ideal.

Zephyr Teachout is an organizer, educator, and scholar with years of experience as a leader in the fights for economic and political equality and against concentration of wealth and control in the hands of the few. Currently an associate professor of law at Fordham Law School, Teachout was previously a visiting professor of law at Duke University and a lecturer at the University of Vermont. She has worked as an antitrust and media expert and served as the Director of Internet Organizing for the 2004 Howard Dean presidential campaign. In 2008 she cofounded A New Way Forward, an organization built to break up the power of big banks, and was involved with Occupy Wall Street. She ran for the Democratic Party nomination for Governor of New York in 2014 and remains actively involved with local politics.

Thomas Frank is a political analyst, historian, and columnist for Salon.com. He is the author of a number of books, including What’s the Matter with Kansas? (2004), The Wrecking Crew (2010), and Pity the Billionaire (2011).

Mansur Gidfar is the Communications Director of Represent.Us, a non-partisan national campaign to combat the undue influence of special interests in American government. Mansur has previously worked as a deputy editor and contributor for viral media site Upworthy, one of the fastest-growing media companies of all time.