Undead Texts: Grand Narratives and the History of the Human Sciences

Undead Texts: Grand Narratives and the History of the Human Sciences 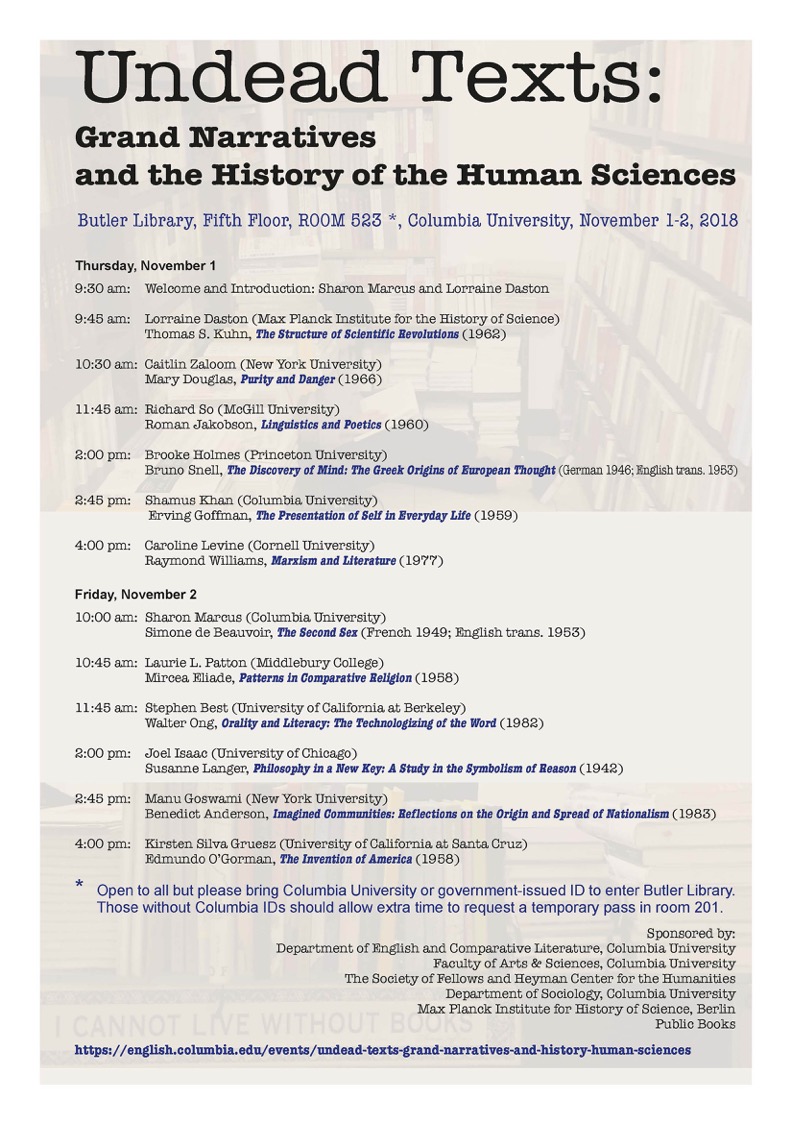 They are the undead texts. Once they bestrode disciplines like colossi: assigned on every reading list, cited in almost every book and article, endlessly discussed and debated. They were often the only college texts students could recall decades after graduation; they recruited a whole generation of scholars to their respective fields. Most were composed between 1920 and 1970: in literary studies, Erich Auerbach’s Mimesis (1953); in the history and philosophy of science, Thomas S. Kuhn’s The Structure of Scientific Revolutions (1962); in anthropology, Mary Douglas’s Purity and Danger: An Analysis of the Concepts of Pollution and Tabu (1966); in sociology, Erving Goffman’s The Presentation of Self in Everyday Life (1956); in gender studies, Simone de Beauvoir’s The Second Sex.

These ambitious and erudite books covered many centuries and languages. They set forth big ideas and strong narratives. Those qualities made them vulnerable to specialist rebuttals; there is probably not a single claim in any of these texts that subsequent scholarship has not queried, criticized, or refuted. Yet no alternative has replaced them; instead, a multitude of more focused monographs must be assigned to cover the same territory. No accredited scholar still believes them, but no one escapes the spell they once cast.

These texts refuse to die. They have never been out of print, continue to be translated, and still appear on the syllabi of undergraduate classes — not infrequently assigned by the very scholars who made their reputations challenging them.

This conference will ask why. What qualities do these undead texts have in common? What accounts for their undying appeal? And what can these time capsules from another era illuminate about how we teach and pursue the human sciences today?

9:30 am: Welcome and introduction: Sharon Marcus and Lorraine Daston

7:00 pm: Dinner for speakers, details to be announced

2:00 pm: Joel Isaac (Cambridge University)
Text: Suzanne Langer, Philosophy in a New Key: A Study in the Symbolism of Reason (1941)

Co-sponsored by the Max Planck Institute for the History of Science, Berlin and Columbia University Faculty of Arts and Sciences, Department of English and Comparative Literature, Department of Sociology, The Society of Fellows and Heyman Center for the Humanities, and Public Books.