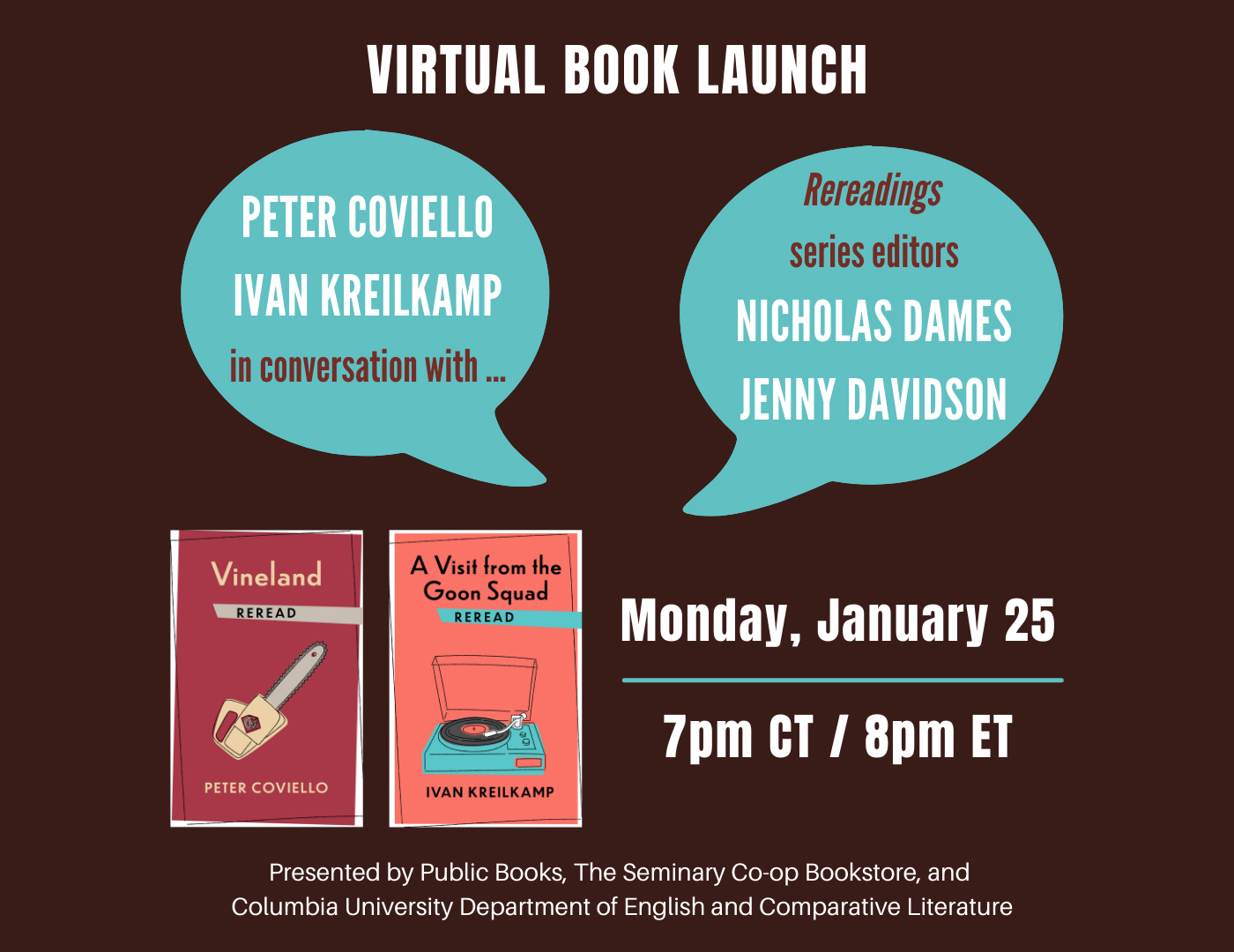 Peter Coviello, author of Vineland Reread, and Ivan Kreilkamp, author of A Visit from the Goon Squad Reread, the first two books in the new Rereadings series from Columbia University Press, will be in conversation with series editors Nicholas Dames and Jenny Davidson at this virtual launch event. Columbia University Press senior editor Philip Leventhal will introduce the event.

The Rereadings series offers readers short, accessible, inventive books by scholars, writers, and critics, each one revisiting a favorite post-1970 novel from the vantage point of the now. Taking a look at novels both celebrated and neglected, the series aims to display the full range of the possibilities of criticism, with books that experiment with form, voice, and method in an attempt to find different paths among scholarship, theory, and creative writing.

Registration is required to attend this presentation.
Register here.

Peter Coviello is professor of English at the University of Illinois at Chicago. His most recent books include Long Players: A Love Story in Eighteen Songs (Penguin, 2018) and Make Yourselves Gods: Mormons and the Unfinished Business of American Secularism (University of Chicago Press, 2019).

Ivan Kreilkamp is professor of English at Indiana University. His books include Minor Creatures: Persons, Animals, and the Victorian Novel (University of Chicago Press, 2018), and he is coeditor of Victorian Studies. He has published pop-music criticism in the Village Voice, Spin, Rolling Stone, and elsewhere.

Nicholas Dames is a professor of English and comparative literature at Columbia University. He is the author of two books on 19th-century British fiction and criticism on recent fiction in the Atlantic, the New Yorker, n+1, and elsewhere. He is currently coeditor in chief of Public Books.

Jenny Davidson is professor of English and comparative literature at Columbia University. Recent projects include an edition of an unpublished novel from the 1950s, The Duchess of Angus (Trinity University Press, 2020), and a regular interview column at the Rambling about new books in 18th-century studies broadly conceived, Five Questions with Jenny Davidson.

Presented by Public Books, the Department of English and Comparative Literature at Columbia University, and the Seminary Co-op Bookstore.

Order A Visit from the Goon Squad Reread from the Seminary Co-op Bookstore: https://www.semcoop.com/visit-goon-squad-reread