Everybody’s Protest Play?
Amiri Baraka’s Dutchman restages a familiar scene: a young black man is killed, his body discarded like jetsam by his fellow citizens. This signature Black Arts play was revived this spring, for its ... 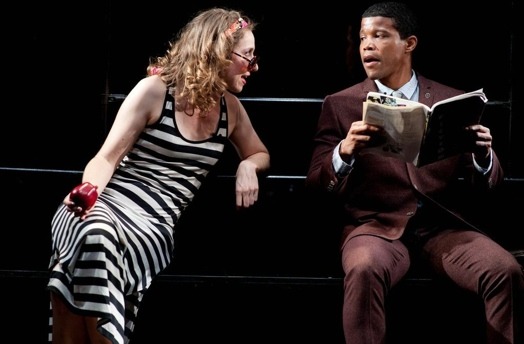 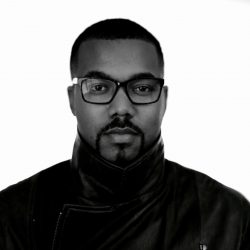 Amiri Baraka’s Dutchman restages a familiar scene: a young black man is killed, his body discarded like jetsam by his fellow citizens. This signature Black Arts play was revived this spring, for its 50th anniversary, by the National Black Theatre and the Classical Theatre of Harlem and after each performance the audience reflected with the cast and crew on what they had just seen in a talkback. If the discussion that followed the final showing last month was any indication of how other audiences received the performance, then we can safely say Baraka continues to make us very uncomfortable. At the end of the show, the small, cramped theater was so thick with tension that a staff member immediately instructed us to meditate (“everyone breathe in on the count of three!”).

On its face, the play seemed like a textbook enactment of James Baldwin’s definition of protest literature. Exemplified by Uncle Tom’s Cabin and Native Son, this is the fiction he excoriates for simplifying interracial relationships through the banal formula that blackness is “evil,” whiteness “grace.”1 This opposition in turn, he claims, simplifies the humanity of everyone involved, not solely the black humanity that protest literature tries to prove.

In Dutchman, Clay (Sharif Atkins of White Collar and ER), is travelling by subway to a party when he meets Lula (Ambien Mithell), a white seductress. In the course of about an hour Lula tells him all the things she “knows” about his middle-class black life2: essentially that he’s an “Uncle Tom,” “afraid” to fight against white supremacy, but paradoxically also a “[Bigger] Thomas,”3 a “murderer” in disguise.4 She eventually rouses him out of his demure, flirtatious demeanor into rancorous rage, whereupon he exclaims—Atkins expressing this explosion with a continuous spray of spit—that his “people” may one day kill her to keep themselves “sane.”5 In other words, Clay perfectly conforms to her stereotypic perspective. As soon as he settles down, Lula coolly stabs him and the surrounding passengers jettison the body. The play ends with Lula luring her next victim.

What could be a better depiction of what Baldwin calls “this web of lust and fury,” in which “black and white can only thrust and counter-thrust, long for each other’s slow, exquisite death”?6 Baldwin says that equally egregious as the reduction of these characters to types—at best to thought-experiments, at worst to allegories of prejudice—is the “comfort” in the reader protest literature engenders.7

Dutchman’s message could be considered deplorable for many reasons but comfort is not one of them. On account of its artistic brilliance, the discomfort the play excites alone makes its message worth hearing again and again. During the play’s first run throughout 1964, audiences were probably as uncomfortable as we were. In mid-July of that year, four months after it premiered, James Powell, a 15-year-old African American, was gunned down by a white police officer, an act that sent Harlem into contagious riot.

Of course, this brings to mind that in mid-July of last year, George Zimmerman was acquitted for slaying another burgeoning black man. Producing director Ty Jones was likely thinking of Trayvon when he wrote in the playbill that Dutchman asks us what “action” “marginalized people” should take “when a man of color can still be targeted, provoked and ‘lawfully’ killed.”8 Yet how we should act in response to an uncanny alignment between historical horrors and cultural productions is a question that should come only after we ask whether it is really an alignment at all?

the discomfort the play excites alone makes its message worth hearing again and again.

The vagueness of Jones’s statement testifies to the fact that to speak any further of the play’s connection with current events, we would have to ignore that Clay’s murderer was not a white policeman, but a white woman, and that the threat of black masculinity, though central in the play, explains only part of the problem of the death and devaluation of black bodies. Nonetheless, director Carl Cofield said in an earlier talkback that the recurrence of these racially charged murders—and their legal sanction—is signaled by the continuous motion of the train. Indeed, to emphasize the mundanity of the violence, Cofield took liberty with the script and doubled Atkins as Lula’s next target, “Young Negro.”

Once we look past these implied overlaps and into the gaps between history and the play, we might at once feel surprised and disturbingly unchallenged. Against the stereotype of the black male, Baraka renders a white woman the violent one, deadly not only to human life (that is, if Clay, a stereotype and a “Dutchman,” which is a cobbling “strip of cloth” in theatrical terms,9 can be considered a human being), but deadly also to threats against the US capitalist system. Remember, she kills her “middle-class” Clay, as she calls him, right after he unveils his anarchic fury: “If I’m a middle-class fake white man… let me be. […] You don’t know anything except what’s there for you to see. An act. Lies. Device […] to keep myself from cutting all your throats.”10

But is this somewhat surprising drama also not what we expect? The woman is again the dangerous seductress. And in the context of race, is this not what usually has happened in history, “Negroes, except for isolated … incidents,” as Baraka writes in his philosophy of violence, “have never been anything but nonviolent”?11To reverse the stereotype of the threatening black man is simply to reveal what seems its utterly obvious, motivating fantasy: total sexual and economic domination. 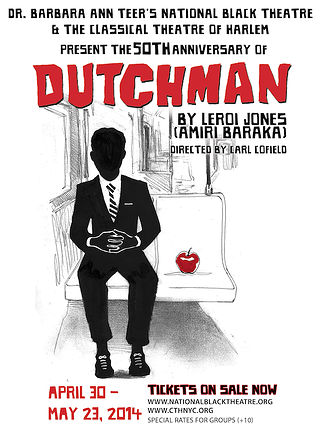 Flyer from the National Black Theatre’s 2014 production of Dutchman. nationalblacktheatre.org

What made at least me uncomfortable, however—and here I think was the brilliance of the directing—was not watching this fantasy play out, but watching Cofield emphasize its obviousness. In comparison to previous productions, including the 1967 film version of the play, Cofield and his crew added unprecedented emphasis to the script’s sexualization of racial violence: in Mitchell’s performance of apple-eating Lula, she never stops gyrating her hips, even when sitting down, and the flyer for the play presents a black man sitting in a subway car next to not a woman but a red apple, an exaggerated reduction of Lula to evil Eve. Pushing her seduction to the edge of comedy, making what is obvious in the text hyper-obvious, Cofield makes us think: Is this obvious at all? Does racism always sexualize the other? About midway through the play Lula tells Clay that “all this time” they’ve been talking about his “manhood,” but from the performance one wonders if the sexualization of black bodies explains or obscures historical instances of racial violence.12 Cofield forces us to uncomfortably question what has become common knowledge about the fantasies underlying racist hate crimes, fantasies that connect a cultural production, where they are envisioned, with historical events.

the word “Clay,” meaning “the human body,” intimates the play’s concern with our common humanity.

It is hard to disagree with Baldwin when he claims that to merely invert a stereotype is to “reinforce” it, but Cofield showed that Baraka is up to much more.13 Better than any other production on record, Cofield’s drew out from Baraka’s text the already exaggerated and thereby puzzling characterization of Lula and Clay. We cannot responsibly say of them what Baldwin says of Stowe’s Uncle Tom and Wright’s Bigger Thomas—that “they are fantasies, connecting nowhere with reality.”7 But, certainly, if they have little to do with human life, they have less to do with history.

The comments in the talkback suggested that it was precisely the tension between the play’s overlap and its divergence from the historical present that made others uncomfortable, too. Asked what insights the play bears on racism today, Atkins said something surprising. He stated passionately that the word “Clay,” meaning “the human body,” intimates the play’s concern with our common humanity.15 Yet Atkins did not connect this insight to the details of Clay’s characterization—its stereotypical flatness, its middle-class status, or its hyper-sexualization—details that would have severely constrained his interpretation. Given the time, perhaps Atkins would have accounted for those contradictory features. Either way, against what seemed to be the goal of the performance judging by the cast and crew’s forced interpretations,  an interconnection is precisely what we struggled to feel, so much so that at the end of the discussion we were told again to meditate, for “in the breath we are one.”

If oneness of spirit were the play’s message, it would not need such protest. But by compelling us to struggle to feel this interconnection by means of the sheer denial of any humanizing vision, the play, however forcibly, made us to stand together on the rock of multiculturalism. The brutality with which Dutchman negates Clay’s life, and Lula’s along with it, surprisingly displays what Baldwin critiques protest literature for hiding: the senselessness of fighting for our humanity and “the need to do what is infinitely more difficult—that is, accept it.”16

We may finally find it relieving, then, that the discomfort Dutchman brings is caused more by its distance from who we are and how we operate, than by its closeness. When old stereotypes are staged in such a way they inspire us to recognize ourselves in each other, when reducing a history of racial violence to a sexual issue makes an audience pause with discomfort and affirm our more complicated and thus historically truer interdependence, when what at first seems to reinforce prejudice turns out to undo it, we are looking at the underbelly of  “everybody’s protest novel.” For the real surprise we find beneath the veil of the obvious, this play, if done as well in the future, should continue to draw crowds.