Famine Fiction
Betraying friends. Trading sex for food. Devouring human flesh. All of these occurred during the famine that followed China’s Great Leap Forward (1958–1961), and all of them ... 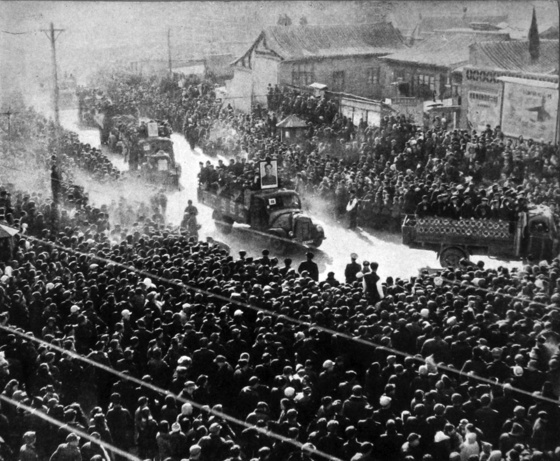 Betraying friends. Trading sex for food. Devouring human flesh. All of these occurred during the famine that followed China’s Great Leap Forward (1958–1961), and all of them feature prominently in Yan Lianke’s The Four Books. Carlos Rojas’s translation of Yan’s novel, which was originally published in 2010 in Taiwan and Hong Kong, tells the grim story of urban intellectuals banished to a labor camp. They first experience the giddiness of the push to smelt steel and increase crop yields as the Great Leap Forward began, only to suffer through the horrors of starvation as it progressed.

The Great Leap Famine, a man-made disaster that killed more than 30 million people, remains politically sensitive in mainland China. Yan Lianke, whose previous novels also offended literary censors, knows this as well as anyone. So when he decided to write about the famine, he put censorship out of his mind. According to Yan, The Four Books “is (at least partially) an attempt to write recklessly and without any concern for the prospect of getting published.”

The result adds to what has become an impressive group of books and articles about the Great Leap Famine, its causes, the death toll, and variations among provinces as well as between cities and villages. Many such works have been written by Chinese scholars and journalists, published in Hong Kong, and then smuggled back into China by mainland visitors to the former British colony—although crossing the border with prohibited books has become increasingly difficult.1

The most prominent of such books found in Hong Kong bookstores is Yang Jisheng’s Tombstone (an English-language version was published in 2012). Other path-breaking works that have never been translated include Cao Shuji’s The Great Famine: China’s Population, 1959–1961 (2005), which draws on openly published demographic data to arrive at an estimated death toll of 32.5 million; and The Xinyang Incident (2009) by Qiao Peihua, a local Communist Party historian in Henan Province who gained access to damning archival documents that show the culpability of provincial officials in one devastated region.

Yan Lianke is also from Henan. The nameless characters in his book—especially the Child, who governs the labor camp with a blend of harsh humiliation and pathetic sniveling—are obsessed with pleasing the “higher-ups,” who reward falsified harvest reports with red stars and promises of junkets to the provincial capital. A real-life frenzy of competitive lying took place at the height of the Great Leap Forward, and it played a key role in triggering the famine. When provincial, district, and county officials requisitioned grain based on the falsified numbers, hardly anything was left for people to eat.

Someone chewing beans “like a hammer pounding the floor” made me groan when I read it in English and again when I checked the Chinese.

One character, known as the Author, compiles “Criminal Records,” in which he denounces his fellow labor camp inmates in exchange for favors from the Child. But the same character comes across far more sympathetically when he records his private thoughts about his hunger, loneliness, and boredom in “Old Course.” Offering “higher-ups” something completely at odds with one’s inner thoughts was a defining element of the Mao Zedong era. In the decades since Mao died, this survival strategy has persisted. It suffocates academic inquiry in China today: huge national-level grants go to “research” projects about the theoretical contributions of General Secretary Xi Jinping’s speeches. Meanwhile, historians conducting archival research about what actually happened during the 1950s, 1960s, and 1970s are denied funding and cannot publish their work inside China. Yan captures the lead-up to this disaster, as well as the horrors of the famine itself, through three interwoven and excerpted narratives (the fourth of the eponymous “four books” is a brief update of the myth of Sisyphus that comes at the very end of the novel). The promotional jacket text distractingly claims that Yan’s narratives echo “the four texts of Confucianism and the four Gospels of the New Testament.” But when it comes to understanding the history of the Mao Zedong era, Yan’s approach accomplishes something far more significant than a tip of the cap to Confucian classics or the Bible.

Yan is saying as much about China’s present as he is about its past. The Four Books belongs on a contemporary Chinese fiction reading list, but I am less certain whether it merits inclusion in a Great Leap Famine bibliography. Many impressive nonfiction works about the disaster have been released in recent years. English-language readers can read visceral accounts of cold-hearted elite politics and grassroots misery in two collections compiled by Zhou Xun, a historian based in England. Zhou’s The Great Famine in China, 1958–1962: A Documentary History (2012) and Forgotten Voices of Mao’s Great Famine: An Oral History (2013) are filled with evidence of lies, cover-ups, theft, beatings, starvation, and cannibalism. These accounts are especially powerful because they come straight from the archives, and from the mouths of survivors.

Two unique aspects of Yan’s novel have not received adequate attention from scholars—labor camps that housed urban exiles, and widespread sexual abuse. Students of the Great Leap Famine, however, will soon be able to read sophisticated scholarly works about both topics. Cao Shuji and Yang Bin’s devastating “Cadres, Grain, and Sexual Abuse in Wuwei County” will be published in English in the Journal of Women’s History in 2016; Canadian historian Ning Wang’s book about the experiences of Beijing intellectuals exiled to labor camps should come out from the University of British Columbia Press shortly thereafter.

For many years, intellectuals in China and the West have rightly portrayed educated urban exiles as victims. What comes through clearly in Ning Wang’s study is that people condemned as “rightists” were also victimizers. Many people informed against their colleagues in (often futile) efforts to save themselves. Betrayals and victimization began before exile and continued in the labor camps. This is also a central theme in Yan’s The Four Books, particularly when the character known as the Author secretly reports on his peers’ transgressions, which ranged from shirking work to an illicit sexual relationship.

So should readers wait for the publication of Ning Wang’s book to learn about real-life examples of backstabbing, or should they turn first to Yan Lianke’s fictionalized version? A book by a prominent, award-winning novelist such as Yan calls much-needed attention to a terrible atrocity and makes a strong point about intellectual life in contemporary China. But it is difficult to wholeheartedly celebrate it, partly because of the unevenness of Carlos Rojas’s translation.

I found some of the language in the translation historically inaccurate and out of place, so I sought out the original Chinese version to figure out what Rojas was referring to. On the eve of being deported to a labor camp, one man’s colleagues tell him that he is the only person among them able to “resist the reformers.” The word “reformers,” or any of its possible Chinese equivalents, would not have been used in 1957 or 1958 because it was not part of the vocabulary at the time. The term immediately made me think of economic reformers associated with Deng Xiaoping’s “reform and opening” policy of the 1980s. It turned out that Rojas had simply misunderstood the Chinese text, in which the deportees’ coworkers were telling him that he was the only person who could withstand labor reform.2 There are no “reformers” in Yan’s sentence.

To be fair to Rojas, The Four Books is unwieldy in any language. Each page presents the translator with difficult choices. Rojas tries to be faithful to the original, mimicking Yan’s staccato sentences and attempting to render directly clunky metaphors and similes in English. Someone chewing beans “like a hammer pounding the floor” made me groan when I read it in English and again when I checked the Chinese. Even when Rojas is at his best, as he is in a smooth and readable section about a character’s use of his own blood to feed monstrously large wheat plants, he cannot get around the fact that ten ponderous pages about wheat growth is tedious for readers.

This is Yan’s doing, not Rojas’s. Yan has paid no heed to mainland China’s censorship regime in writing The Four Books, but he has also overestimated his audience’s patience. Yan closes his novel with an account of Sisyphus finding meaning in his punishment and successfully hiding his contentment from God. Along with other mythic and supernatural elements of the book, this is a compelling allegory for how intellectuals might survive in any authoritarian environment. I do wonder if the author could have made this point without punishing readers by forcing them to shoulder unwieldy, boulder-like sections about iron and crops. Nonetheless, an author writing however he wants about a topic as important as the Great Leap Famine is far better than history written to please China’s current higher-ups.