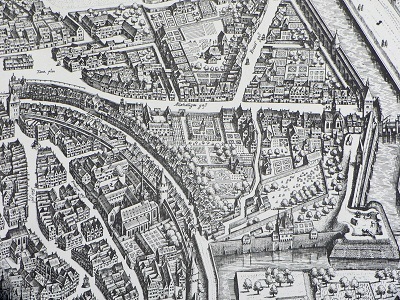 What is it like to be a fly? What is it like to be a Jew? Despite its trans-species premise—an 18th-century French Jew is reincarnated as a fly in 21st-century Long Island—Jacob’s Folly, the new novel from author and filmmaker Rebecca Miller, is far more interested in answering the latter question than the former. Yes, there are moments of Kafkaesque bewilderment as Jacob looks in the mirror and finds several eyes staring back at him; yes, there are paragraphs devoted to the fantasy of being able to see, land on, and taste people unnoticed; yes, there is first-person fly sex. For the most part, however, Miller (The Private Lives of Pippa Lee) is not interested in exploring the nature of flyness; instead, she uses her hero’s transformation to play with narrative possibilities and theological questions.

The novel is divided into two alternating plots, both told from Jacob’s perspective, both narrated in the cynical, erudite voice of a three hundred-year-old Continental libertine. (Fans of Glen Duncan’s The Last Werewolf will feel right at home.) The first plot, set in Paris, begins with Jacob’s struggles as a teenage street-peddler in the Jewish quarter, yearning for a less Orthodox life and a more psychologically stable (and sexually available) wife. After he is bullied by a French patrolman who only barely tolerates the presence of Jewish merchants, Jacob finds himself imprisoned for possessing and discharging an ornate dagger-gun. The narrative then becomes a series of picaresque escapades involving licentious aristocrats, scheming servants, kindly courtesans, and, of course, a theater troupe. The pacing of the human Jacob’s life story can feel hectic; indeed, both plots seem to wander around about as much as Miller’s central insect.

The second plot, set in present-day Long Island, is much more compelling, partly because fly-Jacob retreats into the background to observe two contrasting human figures: Leslie Senzatimore, a 40-year-old Italian American boat repairman with a massive frame and an unshakeable sense of personal duty; and Masha Edelman, a shy Orthodox teenager whose origins and desires to escape them resemble Jacob’s own. The fly-Jacob exercises an inexplicable power to read and control these characters’ minds, and has a compulsion to do so that is never fully explained. He uses that power to nudge Leslie and Masha toward ever more impulsive behavior, and eventually to bring them together.

Patterns from the 18th century repeat in the 21st: Leslie and Masha find themselves under the roof of an eccentric aristocrat, as Jacob once did; Masha is converted to secularism by a charismatic guardian, as Jacob once was; Leslie, like Jacob, self-destructively pursues the wrong woman. Two very different centuries become parallel, making Jacob’s history cyclical. Apart from a corny scene in which Jacob, newly made insect, is astonished when he sees a glowing, handheld rectangle light up with the phrase “Get bucket of chicken am starving,” for the most part he feels comfortable flying around a future that so resembles his past.

Why did Miller choose to graft the motif of metamorphosis onto the time-travel genre? The combination is an awkward hybrid, merging the specter of a destabilized identity with the fantasy of being able to live outside the bounds of a human life. But her experiment makes sense in the context of another genre with which she seems to be in dialogue. One common trait of contemporary fiction that highlights issues of Jewish identity is a tendency to think in terms of generational repetition and genealogical continuity. Miller reverses the usual pattern: Jacob’s Folly offers no scene of a child discovering himself by discovering his grandparents, à la Jonathan Safran Foer’s Everything is Illuminated (2002); instead, in Jacob’s two overlapping narratives, it is the distant ancestor who solidifies his own identity—transmutes it, makes it whole again—by observing the lives of future kin.

Everything is flesh in Miller’s Novel. Leslie is an animalistic slab of meat; Masha is defined by her awakening into the un-Orthodox world of sensuality, sexuality, and touch.

The form of Jacob’s Folly invites another question: Why a fly? Why not some other form of floating, omnipercipient consciousness? Jacob has a (somewhat narcissistic) tendency to liken himself to an angel; why not make him an angel? Were it not for occasional references to his tiny legs and overall frailty, the insectoid Jacob would be like any other narrator—disembodied; out of the frame. There seems to be a larger reason, however, for the care Miller takes to put flesh around this usually fleshless presence. Everything is flesh in Jacob’s Folly. Leslie is an animalistic slab of meat; Masha is defined by her awakening into the un-Orthodox world of sensuality, sexuality, and touch. Identity is embodied, in sentences that sound like Gary Shteyngart at his most grotesque: “Looking back, I think it possible that Leslie created his whole adult life as a defense against that smell.” Abstract feelings are embodied: “She felt herself lurch over a surprising hillock of jealousy.” At one point, the Count who takes the 18th century Jacob under his wing makes a statement that Miller might well make herself: “My project is simply … ideas made flesh.”

An embodied narrator allows Miller certain conveniences, some of which feel like cheating: a way to get characters to do what they might not normally do; a way to make focalization—the process by which certain characters’ minds are explored over others—seem less arbitrary. But fly-Jacob’s new form is not at all a downgrade from his human one. It illustrates a theological point: the body is sacred, and what’s sacred is not the body one has, but the sheer, fleshly fact of having a body at all. That philosophy doesn’t account for the novel’s flaws, but it does lend some intellectual heft to its main conceit. This is a novel about “the value and significance of flesh” (as Robert Browning’s Fra Lippo Lippi puts it) as well as the connectivity of tissue. As such, it maintains that the key difference between Orthodox Jews and Hasidim is that the former alienate the body and the latter embrace it. (“But the body—the body is basically good,” says Jacob’s Hasidic cousin Gimpel.) In this novel, to be able to feel the skin of another person is the greatest possible blessing.

Featured image: Map of the Jewish Quarter in France (1628). This section shows the Judengasse (Jewish ghetto) and the monastery of the Dominican order. Copper engraving by Matthäus Merian