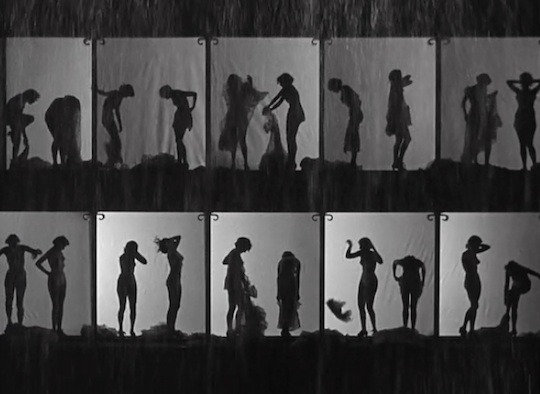 When we think of the ’30s film musical, we tend to picture Fred and Ginger gliding through the polished worlds of Top Hat (1935), Follow the Fleet (1936), and Shall We Dance (1937). Earlier in the decade, however, Warner Brothers produced a spate of song and dance films that were less willing to deny Depression realities. In 1933 the studio released three backstage musicals: 42nd St., Gold Diggers of 1933, and Footlight Parade. All had songs by the team of Harry Warren and Al Dubin, and dance direction by Busby Berkeley, the famous creator of all girl extravaganzas for the filmed stage. Of these, Mervyn LeRoy’s Gold Diggers of 1933 featured the Depression most prominently. Economic hardship both textures the (predominantly female) backstage world of this film, and defines Berkeley’s most magnificent set piece: “Remember My Forgotten Man.”

In many ways the backstage musical was made for the ’30s. It lent stage entertainment an air of social collectivism that spoke to recent war and contemporary crisis; the production always lurches through trouble—infighting, intrigue, lack of time and money—at the center of which a tyrannical yet sympathetic director yells and says mean things. Miraculously, the company pulls it off in the end, when the film can finally bask in the flawless ticking of chorine clocks. 42nd St. and Footlight Parade both follow this formula, but Gold Diggers of 1933 deviates from it. Though the show’s director Barney Hopkins (played by a magnificent Ned Sparks) certainly does yell, the focus is rather on the chorus girls: doe-eyed dancer Polly Parker (Ruby Keeler), torch singer Carol King (Joan Blondell), and wise-cracking comedienne Trixie Lorraine (Aline MacMahon), with Fay Fortune (a pre-Fred Ginger Rogers), rolling drolly along as a fourth wheel.

It’s fitting that Rogers, now an icon of Depression-era sparkle, should open a film that measures the effect of economic decline on female entertainers. Gold Diggers’ currency-themed credits dissolve into Rogers’s face as her dimpled mouth sings “We’re in the money.” And she is, quite literally. All 50-odd chorus girls wear money and undulate outsized silver dollars against a backdrop of even more outsized silver dollars. Ginger herself sports a loin-medallion that spins heavily at odd moments. (“Let’s lend it, spend it, send it rolling along!”) It’s an empty promise that winks slyly at contemporary thoughts on film-musical froth. As the number closes, men from the Sheriff’s office come tearing through rehearsal claiming the chorus girls’ costumes as collateral for unpaid debts. We learn in the next scene that our three heroines share a small apartment, and can recall better times, when a healthy economy meant wealthy men who picked up the check. Doling out a breakfast of milk filched from the neighbors, Trixie (the filcher) reminisces fondly about a “Big Boy” in Havana who, when she asked for cash, used to say, “In my pants pocket.”

Things begin to look up when producer Barney announces his plans for a new show about the Depression. He wants to feature all the girls, Polly’s beau Brad (Dick Powell), and Brad’s songs, including a forlorn march about a “forgotten man.” (“I just got the idea for it last night—watching the men on that bread line in Times Square.”) There’s one hitch: no money, and slim prospects of finding a backer. (To Barney’s idea of securing a couple of “Texas cattlemen,” Trixie quips, “Who eats meat anymore?”) After Brad himself advances Barney the cash, he takes on an air of mystery that is deepened by his inexplicable refusal to play a role in the revue. At the last minute, however, Brad is forced to rescue the show when its aging juvenile male lead is laid low by a “lumbago” on opening night.

After a picture of Brad and Polly performing a number called “Pettin’ in the Park” makes it into the paper, the Boston Brahmin J. Lawrence Bradford suddenly arrives with the family lawyer to forbid his younger brother’s marriage to “this Polly Parker woman.” Lawrence delivers his lesson—”all showgirls are parasites, chiselers, and gold diggers”—to Carol, thinking she’s Polly (all showgirls also look alike). When he asks Carol to name her “price” for releasing Brad, she is furious, but Trixie, who wants the money, convinces her to play along for revenge. MacMahon, as Trixie, is queen of the ride that follows. Blondell’s Carol plays against her as a prankster with a heart of gold. And it’s wonderful to see Lawrence—played by the prince of Pre-code tyrants, Warren William—cut down to size and nursing his champagne hangovers like a roofied Basil Rathbone.

Predictably, Lawrence and Carol fall in love. But before they do, the women play a cruel final trick, transferring the stone-drunk Lawrence into Carol’s bed after he has passed out. His confusion in the morning is hard to watch. Only Trixie, “the most hard-boiled dame on the dirty white way,” has the stomach to carry the extortion all the way through, playing madam to Carol’s “ruined” maiden. It’s Trixie who throughout the film has been the one to bring up prostitution, the unmentionable of female poverty. And it’s Trixie who, in the pre-show pep talk usually given by the director, convinces Brad to carry the juvenile role on opening night. Speaking of the chorus girls, she says, “You can’t let them down—you can’t—if you do—God knows what will happen to those girls—They’ll have to do things I wouldn’t want on my conscience. And it’ll be on yours.”

The three girls now paired with rich men, the backstage plot winds down and all that’s left is the big Depression number. “Remember My Forgotten Man” features Blondell—”spirit of the Depression”—and Etta Moten, whose wailing contralto makes a haunting soundtrack to Berkeley’s Dorothea Lange–like tableaus of widowhood and destitution. If the film’s opening number initially banished the Depression blues, Blondell brings them back with a startlingly topical address to the American populace, delivered in a Weimar-style speech-song: “Remember my forgotten man? You put a rifle in his hand. You sent him far away. You shouted ‘hip hooray!’ But look at him today.” Those familiar with Berkeley’s signature style will be struck by how he adapts it for what amounts to a crisis of masculinity; his usual parade of pretty faces is now a parade of wounded veterans and men in breadlines.

A decade later, World War II musicals like For Me and My Gal (1942), Stage Door Canteen (1943), and Up in Arms (1944) incorporated the lives of servicemen more completely into their formats. These are flag-waving films that celebrate a woman’s wartime sacrifice—in particular her ability to cheer up the troops. “Forgotten Man” insists on making visible her economic struggle. “Forgetting him you see, means you’re forgetting me, like my forgotten man.”