Foucault and the Fictocritics
For at least three decades, starting in the 1970s, Michel Foucault was a phenomenon nearly comparable to the Beatles, or his predecessor on the academic scene, Claude Lévi-Strauss. In a history of ... 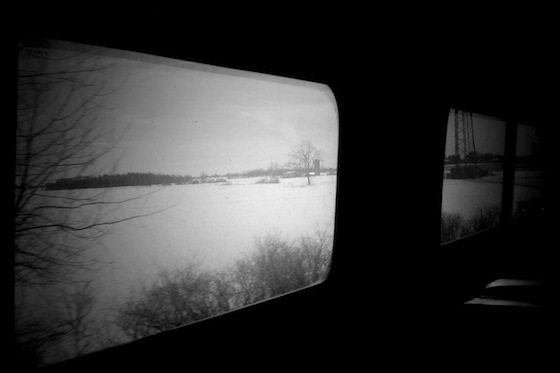 For at least three decades, starting in the 1970s, Michel Foucault was a phenomenon nearly comparable to the Beatles, or his predecessor on the academic scene, Claude Lévi-Strauss. In a history of the leather jacket in the New York Times Magazine, Foucault appears like a god alongside Marlon Brando and the Ramones as a marker for the mid-1970s, when he was becoming a worldwide celebrity. I first encountered Foucault in collections of structuralist essays in the stacks of a small Southern college library around that time. Only one other person at the school read those books; a bald French professor named Simpson. His name was always ahead of mine on the checkout card. Unbeknownst to me, Foucault was in New York at the time, as a visiting scholar for the French department at SUNY Buffalo. While he was there he visited the town of Attica, and the prison there. He gave a lecture on Manet at the museum on a Thursday night. He lived in an old hotel half a mile from where I would eventually live. A friend of mine saw him give a lecture at the university. He was dressed in a black velvet suit. The talk was entirely in French. My friend didn’t understand a single word, but he described it as a turning point in his life. There were shockwaves emanating from Foucault. This was before he became an institution and declined into something like an ancient part of Las Vegas; the inevitable result of thousands of dissertations, essays, and books appropriating his voice. Is it possible today to write anything about Foucault that isn’t already empty?

This is the big question the sometimes poet, hypertext novelist, and theorist Michael Joyce’s epistolary novel confronts. The letters are addressed to a ghost-like woman named Gabrielle, and to the historical figures of Foucault’s lover Jean, his mother, and a colleague and mentor. He solves the problem by going back in time, to Sweden, in the winter of 1956, before Foucault had become an international superstar. He’s still a minor figure on the intellectual stage in Paris. He has a full head of hair. Joyce doesn’t pretend to be doing a straight history. He constructs a fictional Foucault as a narrator meticulously rescued from historical pieces. The Jaguar he drove and put in a ditch in Sweden appears, as do the gold-rimmed eyeglasses that were so characteristic of his stare. There is his opera cape, and a gamut of relationships, seminars, and students gleaned from multiple biographies.

The narrator’s voice allows Joyce to get into spaces typically ignored, forgotten, or deemed irrelevant. In doing so, Joyce joins a group of theorists/writers like Michael Taussig, Lesley Stern, Donna Haraway, and Kathleen Stewart who practice a thing called fictocriticism, a hybrid of history, theory, and fictional techniques. Joyce cuts a different avenue for conceptualizing the historical Foucault’s work. By chance I came across a reference to Foucault’s breath, included by his friend and former lover Hervé Guibert in his novel To the Friend Who Did Not Save My Life, a portrait of Foucault’s death from, and of Guibert’s own ongoing struggle with, AIDS. It was minty fresh. This is the kind of detail Joyce utilizes, adroitly torquing historical details to resuscitate Foucault. The result is addictive. The writing is so beautiful it makes me ache, which is a peculiar emotion for a sociologist. Beauty is not ordinarily a part of my discipline. Nor is the personal confession, and this book draws me, as it did its Foucault, toward confession. My own is that this book scares me. I’m afraid of where it’s taking me.

It was historically cold in Buffalo when I started reading Foucault, in Winter, in the Linnaeus Garden, but still not as cold as the winters Foucault endured in Sweden. Joyce—who, having grown up in Buffalo and spent a winter at the same university that Foucault worked at in Sweden, has some experience with cold—has his Foucault echo René Descartes’s assertion about Swedish winters: “Here even thoughts freeze.” None of the three thinkers directly articulate the next layer of icing that takes place in this kind of winter: hearts turn cold. This is what happens all around the letters that Joyce’s Foucault writes during the end of his relationship with the composer Jean Barraqué, who has remained behind in Paris. Now in Uppsala, Sweden, in the dead of winter, Foucault is alone. He is doing the archival research that will result in his first major work, Madness and Civilization. He gives lectures and French lessons. He listens to Glenn Gould’s recording of the Goldberg Variations at night. This is familiar ground for Foucault’s biographers. It’s from this point on that Joyce’s novel deviates from the straight biographical portrayal. One night on the street he meets a young woman dressed in opera slippers and a rose-colored opera cape over a diaphanous emerald peignoir. Foucault offers the woman his cloak. They adjourn to a café to talk. The novel has begun. All of the action takes place as a report in letters, most unsent, most addressed to the woman. The letters veer toward the confessional. That these letters remain largely unsent is important for Joyce. His version of Foucault is unauthorized, not even by an imaginary postage stamp from the state.

The book is disturbing. What seemed to be letters on the surface are actually blocks of sentences turning into music. It’s an opera in three languages: Swedish, English, and French. The Swedish appears like a doorstop to remind us where we are. English sentences abruptly burst into French. I don’t read French, so the sentences resemble exotic landscapes that are gorgeous read aloud. I imagine the texture of each sentence, and together they make up almost a quarter of the novel (in another mouth, since mine is mute here). I moved my lips as I read like St. Augustine did. Occasionally it’s like being in a Pentecostal church service and erupting in tongues or, as Joyce describes it in his introduction, scanning the radio dial with its range of sounds and languages. When I read authors like Gilles Deleuze or Raymond Roussel, my eyes flit across pages before finding some solidness or stickiness, but this is something else. It’s glossolalia. It’s an opera waiting to be performed. The musicality of the text points back to the importance of music in Foucault’s work. In her book Mad for Foucault, Lynn Huffer describes coming into a private apartment in Paris where Foucault’s original letters to his lover Jean Barraqué are housed in an archive. The letters are in a red loose-leaf binder, in cellophane sleeves. She spent the afternoon poring over them, almost devouring them, as she describes it. Foucault’s affair was an important moment. It was his first major love affair. He was recovering from at least two suicide attempts. It’s been suggested that his partner’s music shifted the direction of his thinking. But the letters to his lover comprise only a tiny part of Joyce’s book. Instead, Joyce finds in the young woman a double to the younger Foucault, and a different kind of music.

The novel is smart, and beautiful, but it isn’t an easy book. By that I don’t mean it is difficult to read. It makes me read too much. Joyce’s slender novel has caused me to rethink everything I knew about Foucault. It made me go back to books scattered across Foucault’s career. I reread Madness and Civilization, which is at the center of Joyce’s book. I finally read Forget Foucault, by Jean Baudrillard. I looked hard again at The History of Sex and Discipline and Punish. I bought the Glenn Gould record on vinyl that Foucault listened to in the novel (it was in Foucault’s collection) so I could hear what Foucault heard. I read the biography of Foucault by Didier Eribon that Joyce used in the construction of the novel. I read three books by Foucault’s friend and lover Guibert in which Foucault appears as a minor character, an influence, and, after his death, as a presence. I read The Polish Peasant in Europe and America for the first time, the first great work in epistolary sociology. I read Elias Canetti’s Kafka’s Other Trial and Kafka’s love letters, which underlay his great novel The Trial, to understand how these imaginary letters could have shaped Madness and Civilization. I read for the first time many of Joyce’s earlier works to try to get a handle on this novel and its author. This is what a great book does. It rearranges its reader, its subject, and stresses one’s library.

this book draws me, as it did its Foucault, toward confession. My own is that this book scares me. I’m afraid of where it’s taking me.

The French theorist and provocateur Jean Baudrillard saw the world hardening around Foucault in the early 1980s, soon after the publication of the genre-shattering The History of Sexuality: Volume 1. Baudrillard, relatively unknown at the time, had in 1976 sent his essay “Forget Foucault” to the prestigious journal Critique, where Foucault was an editor. Foucault was at the apex of his career. Beginning in 1961 with Madness and Civilization he produced a string of remarkable books: The Birth of the Clinic in 1963, The Order of Things in 1966, the groundbreaking Discipline and Punish in 1975, and The History of Sexuality: Volume 1 in 1976. There were more. The Foucault who was the most influential in the United States was the middle-to-late Foucault, beginning with Discipline and Punish. This is the bald Foucault in a black turtleneck who became and remained for some time an iconic figure in American universities. It was into this force field that Baudrillard sent his paper. It was summarily rejected, but Foucault was apparently shaken by Baudrillard’s argument. His work on the second volume slowed to a crawl. Foucault would be dead by 1984. After his death, Baudrillard’s book would eventually be published in the United States. Ironically, there is a full-page image of Foucault on the inside back cover of the contemporary edition. On the back there is a small author photo of Baudrillard. The original book was published with the double title Forget Foucault / Forget Baudrillard and a reversible cover to moderate the sacrilegiousness of his attack. The saw tooth of Baudrillard’s argument was simple, direct, and cutting: “Foucault’s discourse is a mirror of the power it describes.”

Baudrillard’s gambit revealed that the electricity around Foucault had frozen solid. Foucault had become an institution with armed guards. Joyce addresses this in his introduction. He expresses his concern over the resuscitation of Foucault’s voice and what the Foucault estate and the Foucaultians will do to the book. Joyce is warned off the project by friends. The book sits for years before it’s published. The other side of this occurs in what used to be a thriving ecosystem for Foucault: the café. A hotshot graduate student tells me how passé Foucault is now. I remember when the pronunciation of his name could change the atmosphere of the room. Recently, at an international conference in Texas, a distinguished professor passed by my seat at the conference table. He glanced down and saw my worn copy of Discipline and Punish. He sighed with astonishment, “People still read that book?” That small passage of air expelled from his lungs is another historical marker, like the leather jacket was. Michael Joyce hasn’t forgotten Foucault. His singular contribution is to bring Foucault back to life even as the independent press that published his singular work, Starcherone Books, has gone out of business. Reading this book keeps a certain kind of intelligence alive on the market.

Foucault, in Winter, in the Linnaeus Garden