From Bartleby to Scrivener for iOS
From the earliest typewriters to Google Docs, writing devices have never been built for novelists. Instead, they are designed for office use, with creative writing of all sorts seen as a marginal-at ... 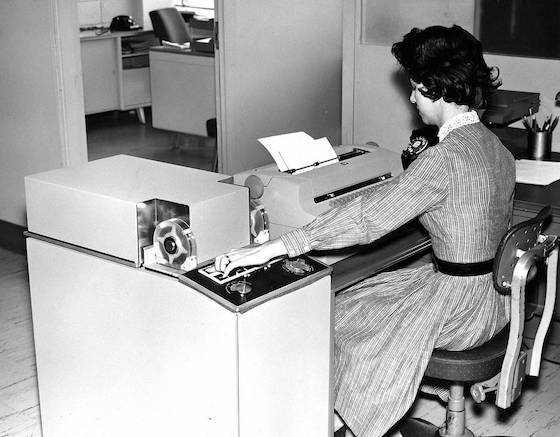 From the earliest typewriters to Google Docs, writing devices have never been built for novelists. Instead, they are designed for office use, with creative writing of all sorts seen as a marginal-at-best side market. Determining what difference these repurposed office technologies make to writing is difficult, though, since no simple hypothesis about the effects of word processing on the final products of writing holds up to analysis. As Matthew Kirschenbaum puts it in his recent Track Changes: A Literary History of Word Processing, “every impulse that I had to generalize about word processing—that it made books longer, that it made sentences shorter, that it made sentences longer, that it made authors more prolific—was seemingly countered by some equally compelling exemplar suggesting otherwise.” By tracing out the practices of writers and their relationships to the machines they use, Kirschenbaum foregrounds writing process rather than writing product.

One of the stars of Kirschenbaum’s literary history is the IBM MT/ST, short for “Magnetic Tape / Selectric Typewriter.” The MT/ST, released in 1964, was the first machine to be marketed as a word processor. This device is a remarkably useful lens for understanding the difference between word processing technologies and their predecessors. A somewhat ungainly object, the MT/ST had little in common with the word processing software I’m typing in now, or even with the dedicated word processing machines of the 1980s. For starters, it had no screen. Instead, its only means of both input and output was a modified Selectric typewriter. As with a standard Selectric, when the user typed on the MT/ST’s keyboard the machine produced a mark on a piece of paper by striking it with one face of a type ball.

What distinguished the MT/ST from a typewriter was that with each keystroke a second mark was also made, this time a magnetic inscription on a strip of tape. When the typist pressed backspace and then typed a new character, the character on paper was typed over but the character on tape was replaced altogether. This tape could then later be played back by the MT/ST, which would automatically bang out the recorded characters onto a new piece of paper. Clean copies could thus be produced without the time consuming work of meticulously retyping documents. It is here that we see the difference between word processing technologies and typewriters, and the thing that makes the MT/ST resemble contemporary word processing software. The MT/ST did not simply inscribe letters on paper, it also inscribed the command to make those letters.

The MT/ST was certainly designed without fiction writing in mind. For starters, its $10,000 price tag ensured that it would almost exclusively see use in business. Moreover, as a product of the era when executives—who as a rule did not know how to type—were never expected to use writing machines themselves, the MT/ST was not intended for creative or intellectual work at all. Instead, it was conceptualized as something like a factory machine, a tool for more efficiently carrying out rote labor. Executives thought and dictated; secretaries listened and typed.1 Provided with the MT/ST, fewer secretaries could produce more clean documents in less time, thereby justifying the cost of the machine to its purchasers.

It’s useful here to note that much as the phrase “computer” originally referred to people rather than machines,2 the phrase “word processing system” did not originally refer to machines or to software but to a way to arrange office workers. Word processing, as a management system, aimed to increase productivity through conceptualizing office work as a type of assembly line. Under the regime of word processing, typing secretaries would work in dedicated word processing centers separate from the office, continuously typing up documents dictated by various executives across the firm, rather than performing varied tasks within the office for individual executives. Expensive devices like the MT/ST encouraged this rationalized and intensified system for office work, as machines cannot earn back their purchase costs while not in use.

Word processing, as a management system, aimed to increase productivity through conceptualizing office work as a type of assembly line.

This type of repetitive work is, of course, tremendously tedious for those stuck doing it. But from the perspective of the bosses, the process was seamless. They recorded—using a dictation machine—the command to produce a document. The workers in the word processing center converted this command into cleanly typed documents, which were then delivered to the boss. Although the labor happening in the black box of the word processing center was necessary for the production of these documents, the labor and the laborers both effectively disappeared in the end product. This is what word processing machines, word processing software, and word processing as an office management strategy all have common: they are techniques for providing the essential labor required to produce texts while also concealing that labor, thereby generating the impression that the command to produce a document can itself produce documents.

Kirschenbaum, in his literary history, identifies the MT/ST as “very likely” the first word processing device used to write a novel—Bomber, a now largely forgotten techno-thriller by spy novelist Len Deighton. The thing that complicates the choice of Bomber as the first word-processed novel is that, like the executives to whom most MT/STs were sold, Deighton himself did not operate the machine. That task fell for the most part to Deighton’s assistant, Ellenor Handley. Deighton’s composition process involved producing very large numbers of handwritten drafts for Handley to type; an IBM salesman, observing this, convinced Deighton to lease an MT/ST in the interest of churning through these drafts more quickly.

It is in this process of writing, rather than in the finished words of a book, that we see most clearly how the advent of word processing shaped writing. Against received ideas of literary writing as an imaginative and intellectual pursuit, much of the work involved in writing a novel is not too different from the work involved in running a small office. Since the microcomputer revolution of the 1980s, the formerly feminized and marginalized labor of typing, and of office machine operation more generally, has become a required skill for all white-collar workers—the days of being able to identify hierarchies by identifying who did or did not have a machine on their desk are long over.

The rhetoric of a seamless transparency between the command to write and the production of writing has remained, however.3 The screen allows users to place their thoughts on the page with as little material resistance as possible. This seamless experience of thinking and typing masks how the labor-saving aspect of word processing has been, from its inception, less about saving labor and more about distributing it differently, less about freeing thoughts from material constraints and more about cleverly rearranging human labor.