From the Archive: Police Brutality
In solidarity with the ongoing actions against police brutality, we return to previous work by our authors on the relationship between policing, poverty, capitalism, liberation, and racial justice ... 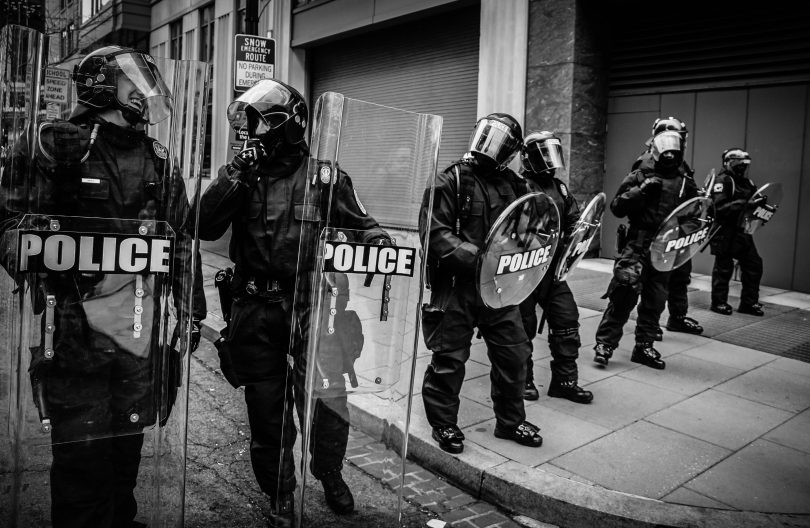 In solidarity with the ongoing actions against police brutality, we return to previous work by our authors on the relationship between policing, poverty, capitalism, liberation, and racial justice.

Today, poor communities of color are under constant surveillance and on the receiving end of brutal market forces. Where high unemployment, inadequate public transportation, and segregation are the rule, surveillance performs the work of control. Rebellions against state-sanctioned violence are inspired by feelings of both oppression and neglect, a contradiction at the core of capitalism’s relationship to black people and black bodies. The supposed freedom and equality of the marketplace depend upon the contempt of the overseer. … Keep Reading

WHEN POLICE ARE THE PROBLEM

Think, if you’ll indulge me, of your last significant encounter with a police officer. For some, this may be difficult, and perhaps all that will come to mind is asking an officer for directions. For others, it will be easy and painful: perhaps you were stopped on your way to work and patted down, or maybe you were pepper-sprayed at a protest. Whatever the case, your experience and interactions with the police are largely determined by where you are, what you look like, and your access to legal and financial resources. … Keep Reading

THE BOOK THAT MADE ME: LEARN HOW TO LOVE

Even today there is a place in Chicago where police will detain someone—mainly African-American and Latino males—take them to this place, torture them, and try to beat confessions out of them. And because the police haven’t yet officially arrested them there is no way to know where they are. … Keep Reading

Since the killing of Michael Brown in Ferguson, Missouri, in August 2014, it has become routine—sickeningly so—to bear witness to police shootings of black men, unarmed or lawfully armed, only to then hear law enforcement’s justification for why they committed murder. In these narratives, any action, reaction, or even non-action by a black man warrants violent suppression by the police. … Keep Reading

Routine, aggressive, and all-too-often lethal police encounters between black Americans and law enforcement authorities have been a source of protest and resistance historically. Beginning in the mid-1960s this erupted into full scale rebellion, and the revolts and protests continued through the 1970s. Since the problems have remained, and since awareness of racial profiling and police brutality has grown in recent years, people are rising up against racist policing practices across the country from Ferguson to Baton Rouge. … Keep Reading

One byproduct of settler colonialism, enslavement, white supremacy, racist policing, and capitalism is those systems’ success in convincing their victims that there is no alternative or that imagining something different will be futile. The only way one can address the question, “What does public safety look like in a world without police?” is to collectively devise a vision. … Keep Reading

Police and prisons have expanded in both quantity and meanness over the last half century to enable the brutal management of (potentially) rebellious workers made obsolete by the increasing globalization of American capitalism. But perhaps, in the depths of the Trump era, buoyed by the hunger and labor strikes that increasingly dot the American carceral landscape, the demands for full employment and universal health care, the civil disobedience actions aiming to halt the detention and deportation of immigrant workers, we can start to see the abolitionist horizon come into focus. … Keep Reading