Game of Chance
The narrator of Alexandra Chasin’s novella, Brief, displays a close rhetorical kinship with Vladimir Nabokov’s Humbert Humbert. An art vandal of indeterminate gender, s/he defends an act of ... 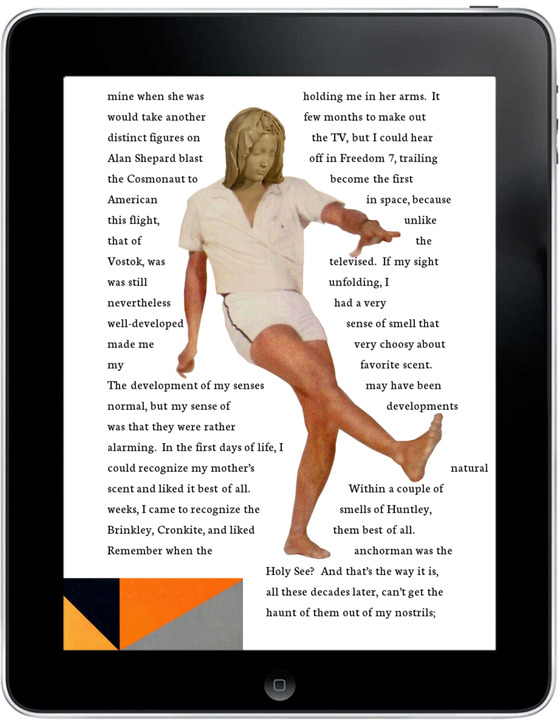 The narrator of Alexandra Chasin’s novella, Brief, displays a close rhetorical kinship with Vladimir Nabokov’s Humbert Humbert. An art vandal of indeterminate gender, s/he defends an act of destruction inflicted on a work in the “midtown temple of Modern Art” through verbal flourishes that rival, and sometimes directly echo, the nymphet-lover’s pleas to his readers and jury. But whereas Humbert laments that he has “only words to play with,” Chasin’s narrator also has images, and play s/he does.

Brief is an iPad application authored by Chasin and designed by developer Scott Peterman (through an open software program) that randomly intersperses images throughout the written text. With each stroke of the finger backwards or forwards, new images, selected from a bank of over 700, alternately accompany, frame, or invade the narrative. Readers can lightly shake the iPad on any given page to provoke an entirely new configuration of images and text. At times, the images can be quite discreet—the merest sliver of a fragment at the corner of the screen. At others, they engulf the text entirely, so that the narrator’s words appear as if printed on a page from TV Guide or bordered by a gilded frame. Many of the images are from the 1960s, when the story is mostly set; as the publisher’s website explains, they “do not serve to illustrate but rather to evoke the time period in play, and to probe the question of cause and effect in history.” Other images represent portions of more or less recognizable artworks endangered by the iconoclasts (including our narrator) described throughout. Still others evoke political events and movements, often violent in nature. An image of The Flintstones’ Barney Rubble might lead to a fragment from Picasso’s Guernica to a still from Hitchcock’s The Birds to a collage of the Algerian massacre in Paris—or to something completely different.

The randomness of the images, coupled with the relative stability of the text (the novella consists of 152 numbered sections), creates a complicated interplay of sameness and difference. Brief dramatizes the peculiar experience that comes with rereading almost all narratives, which Roland Barthes vividly describes in S/Z: “Rereading is no longer consumption, but play (that play which is the return of the different). If then … we immediately reread the text, it is in order to obtain, as though under the effect of a drug (that of recommencement, of difference), not the real text, but a plural text: the same and new.” There is something surprisingly addictive about the ability to manipulate images in this way, even if—or perhaps because—we have no control over the actual outcome. In the course of my own participatory reading, I imagined a link between my actions and those of the art vandals described throughout Chasin’s novella, as voiced in the narrator’s explanation for why s/he assaulted the artwork: “I wanted to bring the art absolutely up to date, to retrieve it from art history and give it life. I wanted to dwell within the act of the painting’s creation, get involved with the making of the work, put my hand within it …” In an attenuated way, the reader of Brief is given this power of recreation through destruction; as “gently” as the instructions at the beginning tell us to shake our iPads, we create micro-traumas with each move, contained versions of the paint splashes and knife slashes of genuine vandals. 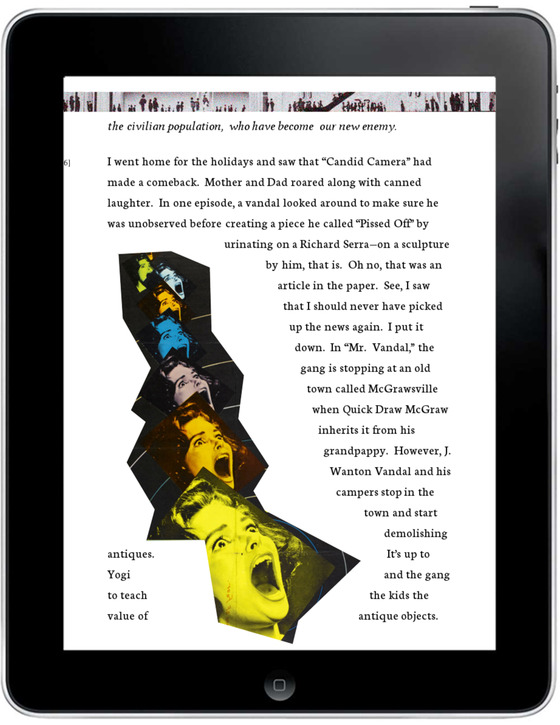 The mini-disruptions we effect on each page also replicate the tension between contiguity and coincidence that marks Chasin’s text. The narrator’s self-defense is, among many other things, a prolonged exploration of cause and effect, of how historical, social, and cultural circumstances shape the (criminal) self, even if they occur remotely. Does it matter that s/he was conceived when a weather plane crashed in the Soviet Union, that a particularly tumultuous stage of his/her gestation occurred in the same week as the South African Sharpeville Massacre, or that s/he was first vaccinated on the same day that Eichmann was tried in Jerusalem? Yes and no, just as it does and does not matter that at this particular moment, the reference to Eichmann is accompanied by the picture of a sledgehammer, which can yield a range of associative meanings. Not satisfied? Shake again, and a porcelain statuette of a girl holding a dog appears. It is difficult not to give some meaning to this sequence of images from the brutal to the delicate, because randomness hardly ever seems random, but it is equally difficult to give them a definite meaning. Only one thing is certain: Chasin’s provocative Brief keeps us shaking and connecting.