Going to Playland?
“I thought we were going to Playland. Are you coming?” This may sound like fun, but it’s not Tinkerbell who’s asking. It’s Glen’s random girlfriend Paula, and she just wants some weed. The future is ... 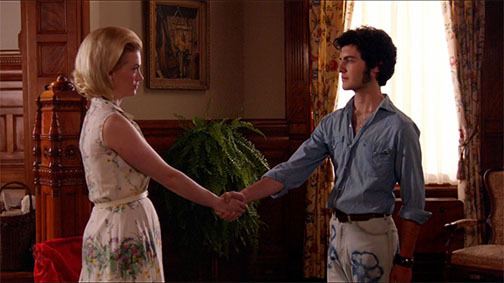 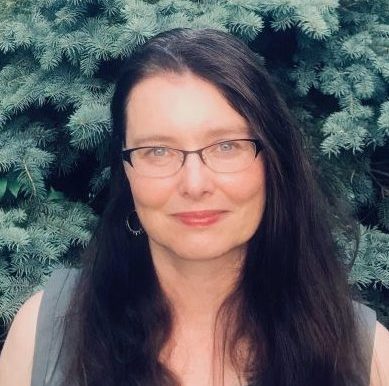 “I thought we were going to Playland. Are you coming?” This may sound like fun, but it’s not Tinkerbell who’s asking. It’s Glen’s random girlfriend Paula, and she just wants some weed. The future is a party, thrown by the Baby Boomers, to which our main characters are probably not invited. 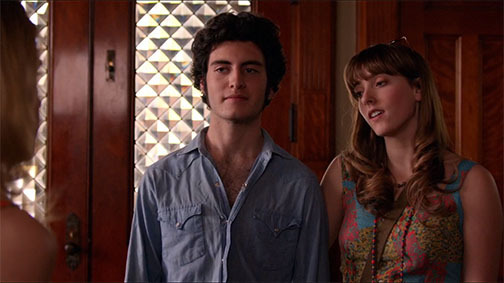 This episode, like the first two this half-season, has a pretty clear theme. The theme of episode 8 (covered by Bruce Robbins for Public Books) was disillusionment and moral compromise, dramatizing the mood of impasse that has dominated the series thus far. Episode 9, though (covered by Corey Creekmur), signaled a complete change: Don made a series of choices that were not totally selfish. This episode finds our lonesome knight sent on a new quest by a quasi-divine father figure: Roger Sterling, with his increasingly God-like facial hair. Issuing an existential challenge, he asks Don to write a big speech about the future, and it has to be something like the Gettysburg Address. No pressure, Don! 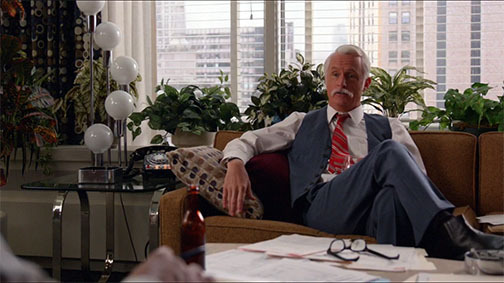 So the theme of this episode is “The Future.” And in the main plot, Don is really stuck, so it has to be played out as usual in all the other subplots. Amazingly, some of them are happy! Could this be true love, at last, for Joan? Joan is confident enough to order French toast at the Beverly Wilshire, and clearly more competent to run the LA office than Lou Avery, who’s been working on his tan and fulfilling his own lifelong dream to place his monkey cartoon at Hanna-Barbera. Then she gets even luckier: she thinks she’s talking to a job candidate, but it’s really a rich developer who walked in the door by mistake. Maybe you think he looks like Mr. Furley from Three’s Company, but he also could be a milder version of Frank Sinatra, and they go out and have guilt-free fun. Some complications ensue when he balks at her ball-and-chain (a four-year-old son) but then he gets over it, and he gives her roses and she looks happy. Hooray! 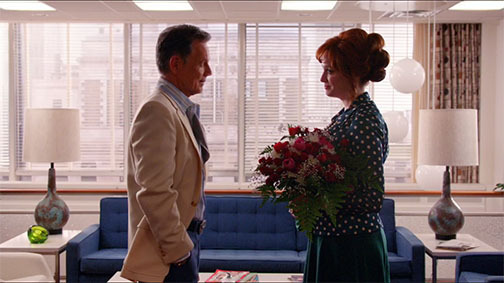 But not everybody has such a clear idea about what they want. In his recap of last week’s episode, Evan Kindley has an exquisite take on how Don’s privilege and freedom contributes to both his aimlessness and the show’s generic formlessness. Don, however, is crushed by all the meta-levels of his assignment—he doesn’t know where he’s going, or what he wants, and the viewer is all too aware that his assignment is also about the impending end of the series. (“Will I be here at all?,” asks Ted, as if he knows that his character’s narrative will have no “next year.”) Don leafs helplessly through magazines that were faced with the same problem of writing cover stories about nothing—the empty new decade of the 1970s. He’s confident that the emptiness of his apartment is an asset for the seller, asserting that its lack of furniture offers the realtor an opportunity to make up and sell some impossible dream—like, the previous owner “made a million dollars inventing a Frisbee and they had to move in a hurry to a castle in France. Taxes.” And he’s right: the realtor does sell, to an expectant couple, gauzy with their shared fantasies. 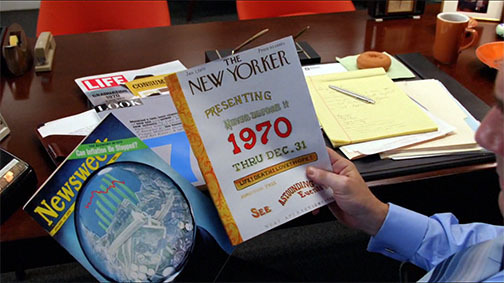 But he can’t sell that Frisbee story to McCann—and they don’t want “science fiction” either, though Don is hilariously diverted by his secretary Meredith’s idea that the future will be like the World’s Fair. (“What was your favorite part?,” he asks in desperation.) The closest he gets is with Peggy, who has an incredibly clear idea of what she wants: first, to be the agency’s first female creative director, and then to be famous, and then to “create something of lasting value.” But Don’s not satisfied and keeps pressing her until she snaps: “Why don’t you write down all your dreams so I can shit on them?,” and walks out. 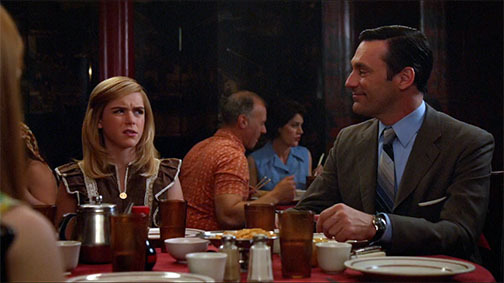 Don fails at mentorship here, like he does with the copywriter he advises to stand up to the client. (Not only does the copywriter flub the apology, he sneers at Don for his lack of character before being fired.) But Pete and Peggy still vie for his approval like angry siblings. Both Don and Betty are ill-cast as parents, but in this episode they also achieve rare breakthroughs in caring for the young. Don disgusts Sally when he seems to respond to her “fast friend” Sarah at dinner, but he connects when he tells her, “You’re a beautiful girl. It’s up to you to be more than that.” The scene Betty shares with Creepy Glen is much creepier (she’s always enjoyed his inappropriate crush on her), but she does feel sorry for him, and sends him off with a heartfelt “You’re going to make it. I’m positive.” 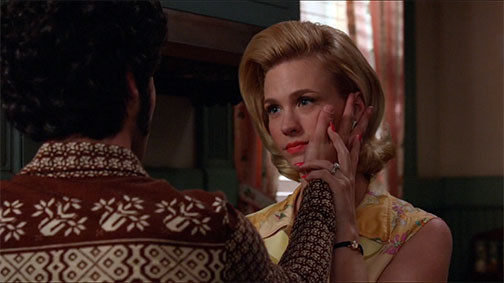 Teens crushing on adults, adults crushing on teens: it’s like the plot of Back to the Future, in which Marty McFly goes back in time and romances his mother, but without the science fiction. The generational irony that propels the show’s revisionist historiography of the 1960s felt especially biting in this episode. I’ll tell you one reason I like the show so much: I was born in 1968, and I feel it’s really about my own generation, even though we’re mostly absent from the screen. Generation X shares with the Silent Generation (the show’s conformist protagonists) a resentful amazement at being sidelined by the Baby Boomers—and the show’s creator, Matthew Weiner (born in 1965), has admitted that this is part of his storytelling logic. In an interview with Stephen Colbert (born in 1964), Weiner suggests pugnaciously that the Boomers have “a child’s view” of the ’60s, and they have a “very sort of demanding thing” where they insist that their “very rosy picture” be represented onscreen. Weiner seems to take real pleasure in withholding that point of view and saying, “I’m not telling your story, I’m telling the story of your parents, or your grandparents.” (At the end of this interview, by the way, Colbert makes an intriguing suggestion for the last frame of the series.) In another interview in The Atlantic, Weiner is even more scathing about the hypocrisies of the boomers, who attracted his ire in the ’80s by simultaneously being “money-grubbing” and sentimental about their idealist teen years. 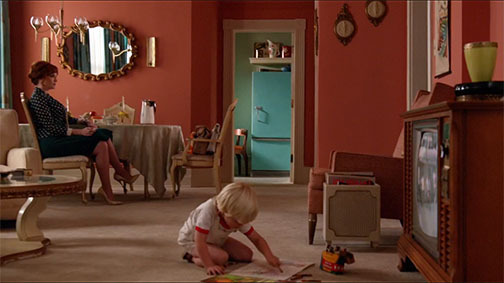 Generation X started out as a big disappointment—an existential condition not challenged but merely intensified by the formlessness of middle age. In the Colbert interview, Weiner claims that the Boomers were a generation of which “very little” was asked, but nothing in particular was expected of Generation X either. It turns out that Generation X is good at building institutions and families, obsessive about pop culture, and great at snarking at things on the Internet. This is the fate, one assumes, that awaits little Kevin, Joan’s child captured listening to a utopian forecast (“Sunny day, sweeping the clouds away …”) on Sesame Street. However, our generations have a common enemy, the boomer simply trying to live her own life—represented in this episode by the annoying teenage babysitter Maureen. When she checks her watch, our heart sinks: poor Joan won’t get that extra hour with her new playmate. “I kind of have someplace to be,” Maureen claims, sensibly and yet infuriatingly. Maureen isn’t so bad: when she scoops up Kevin the next day, the kid looks happy enough. But this is not her story. 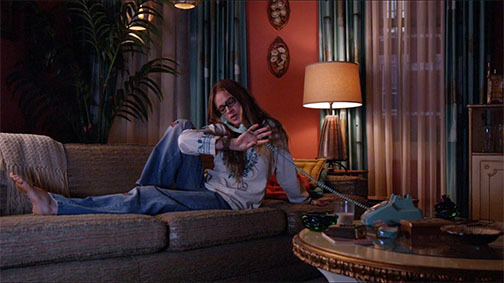 The allegorical reading, in which a Gen X creator sends sympathy and attention to the forgotten and maybe selfish struggles of the Silent Generation, gives the series some of its emotional power. But of course there are other genres at play here: the dazzlingly historical surface, with its jolie-laide prints; the mordant satire on gender norms. We don’t hate all the boomers—we sympathize with Sally’s heartbreaking struggle against her parents’ “oozing” need for attention, and with Glen’s flunking out of SUNY Purchase and tragic enlistment. (Glen’s fate is clearly a darker view of Greg Brady’s sunny life on The Brady Bunch, the show watched by Betty’s kids.) We cheer on the blonde girl who wants to become a senator. Despite its insistence on the dark pull of the past, the show seems ready in this episode to let some of these characters craft their own language of hope.