Two recent books serve as potent reminders of the ongoing historiographic obsessions of graphic narrative. Leela Corman’s Unterzakhn and Mark Siegel’s Sailor Twain are both ambitious historical graphic novels that return to early periods of New York history. Using strikingly different visual styles and narrative techniques, both create deeply haunting fables that, like much of the best historical fiction, resonate with questions and challenges of our present moment.

History has long been one of the graphic novel’s primary obsessions. Will Eisner’s A Contract with God (1978)—a series of connected stories set in the Jewish Bronx of the 1930s—was one of the first books to identify itself as a graphic novel, and launched the association of the “graphic novel” with history and memory. In this book, Eisner returned imaginatively to the Jewish tenements of his youth from which had emerged many of the pioneers who, like Eisner himself, would create the comic book industry. Two years after the publication of Eisner’s Contract, Art Spiegelman began serializing his own historical study of Jewish and family history in his masterpiece of graphic autobiography, Maus.

Thirty-odd years later, history and its attendant concerns—memory, archives, trauma and recovery—remain central to the form. Since 1996, Jason Lutes has been serially publishing Berlin, a dazzling and heartbreaking portrait of the city between the wars. Chris Ware has made history—national, familial, and personal—his abiding theme throughout his influential career. With some notable exceptions—Daniel Clowes, for example—history continues to appear central to the most powerful and influential creators working in the form since 1978. Unterzakhn and Sailor Twain are worthy heirs to the tradition. 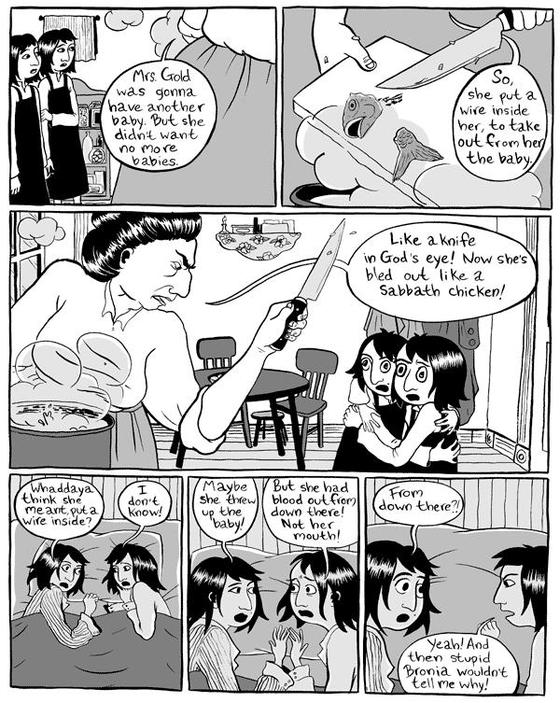 Leela Corman’s Unterzakhn tells the story of two twin sisters, Esther and Fanya, growing up on the Lower East Side in the early years of the twentieth century. The story begins in 1909, the time and place of Henry Roth’s 1934 masterpiece Call It Sleep, a coming-of-age novel Corman surely had on her mind as she worked on Unterzakhn. But where Roth’s story was ultimately about the son’s need to break with the father and the father-tongue of Old World religion and culture, this is the story of the invisible girls of that novel and how they negotiated much more limited opportunities for transition and translation—and pointed references in the book to Salome suggest that Corman’s other literary inspiration may have been Anzia Yezierska’s 1923 immigrant novel, Salome of the Tenaments.

Unterzakhn is, at heart, a parable about two sisters and the very different choices they make. Growing up in the “Zilber Corset & Foundation” shop where their mother decorates Jews and goyim alike, the two sisters are ultimately forced to choose between “corsets” and “foundations” as they seek to negotiate the future unfolding before them on the streets of the city. The vision of their potential future—and the need to make a plan—is brought home to them in brutal fashion in the opening pages of the book when Fanya encounters a woman, Mrs. Gold, bleeding on the street after attempting to give herself an abortion. For Esther, the story of Mrs. Gold’s death leads her to seek out a different model of sexuality and control over her own body than that offered by conventional marriage. For Fanya the response to this tragedy is to arm herself with education, feminism, and activism in order to protect herself and other women against the dangers presented by unwanted pregnancy.

Using strikingly different visual styles and narrative techniques, both create deeply haunting fables that, like much of the best historical fiction, resonate with questions and challenges of our present moment.

Fanya will be apprenticed to Bronia, “the lady doctor,” who teaches her to read and provides her with the foundations to defend against “sexual slavery.” But Fanya comes to question and ultimately reject Bronia’s other lessons, such as her insistence that women “don’t have sexual drives” and that “ovaries are our curse.” Esther, meanwhile, will be drawn in the direction of the “corset,” ultimately apprenticing herself to the local madame, Miss Lucille. Like Bronia, Lucille serves as an alternate mother, and indeed looks strikingly like Esther and Fanya’s biological mother, a woman we learn later has more in common with Miss Lucille than she will ever confess to her daughters. Miss Lucille’s lessons are of a different kind: she teaches Esther to dance, perform, and use her body as a tool for money and perhaps even power. But in the end, her lessons too must be rejected.

As choices go, needless to say, these are poor ones indeed, and neither sister’s story is ultimately a happy one. But despite its tragic conclusion, the novel remains moving and hopeful about the future—even as it insistently serves as a stark reminder of how poor are the choices so many women continue to face a century later. 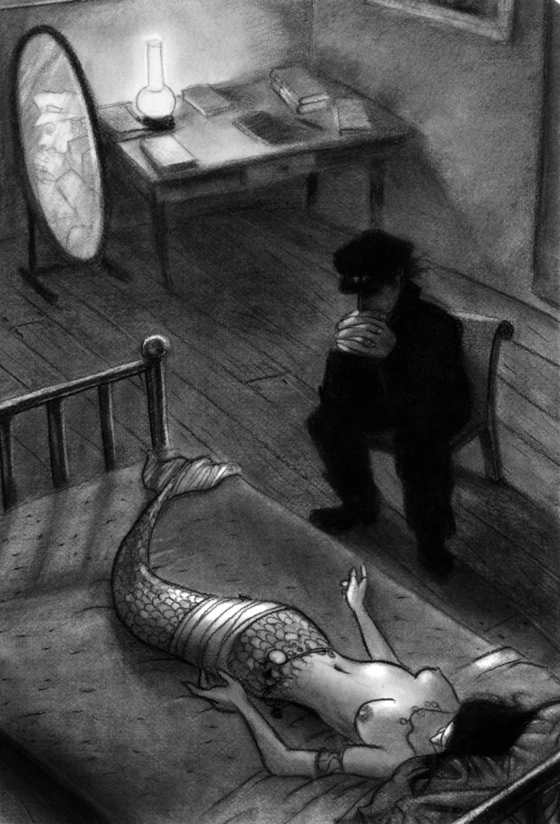 If Corman’s Unterzakhn is a story of the New York streets of a century ago, Mark Siegel’s Sailor Twain takes place almost entirely on the Hudson River, hardly ever setting foot on the shore of the fast-growing late nineteenth-century city. And where Corman’s art in her book is defined by an expressionistic pen-and-ink that perfectly captures the chaotic and sometimes overwhelming force of the city and its new energies, Siegel opts for the soft edges and delicate washes of charcoal. Charcoal is rarely used as the primary medium in comics; in a form that is structurally defined by ellipses and narrative “inefficiency,” many cartoonists opt for tools—pencil, ink, micron pens—that allow them to convey as much visual information as possible in each panel. But Sailor Twain is a story about mists, flowing water, and the smoke of the industrial revolution, as well as a story about what can’t be spoken and what should never be heard. For all these reasons, charcoal is the ideal medium for the work, one I expect to see other cartoonists explore as a narrative tool in the future.

This is a richly researched book (as an upcoming exhibit at the New York Public Library will examine in detail), and it is supplemented with maps and newspaper headlines, both real and fictional. But the world Siegel is recreating here is not only the material world of the late nineteenth century but also a literary one. That our riverboat protagonist is named Twain is no coincidence, nor is the lurking presence of Poe, Melville, and Conrad. And its literary inspiration is drawn as much from the emerging popular literature of the period, represented by the mysterious C. G. Beaverton, author of the wildly popular Secrets and Mysteries of the River Hudson. Both book and author play a crucial role in the denouement of this strange fable of mermaids and riverboats, art and commerce.

this is a fable—a story about choices, about ambition, and about the strange magic of New York and its history.

The 1880s, when the book is set, was the heyday of serial storytelling, both in “popular” and self-consciously literary fiction, and Siegel himself chose to explore and develop Sailor Twain serially in the webcomic (funded by a Kickstarter campaign), the twenty-first-century version of the story papers and literary monthlies of nineteenth-century print culture. For Siegel, serial web publication was intrinsic to the elastic pacing of his narrative. That tempo persists in the bound volume and perfectly suits the wandering riverways on which our characters travel and the mysteries whose depths they vainly seek to plumb.

Like Unterzakhn, this is a fable—a story about choices, about ambition, and about the strange magic of New York and its history. But where Unterzakhn was about two young women trying to navigate their fragile way into a brighter future that hovers always just out of reach, Sailor Twain is mostly about men struggling to avoid the future and the responsibilities they have left on shore. It is about the price these men pay, but also about the costs their romantic quests exert on those who neither own nor captain the ships. It is a book that will leave you wanting to circle back and start again to understand just what it is these men were hoping to learn from their encounter with the romantic sublime—or, more urgently, what we (and our surrogate, C. G. Beaverton)—can take to shore from this misty tale.