Guns Were for White Men
This image from the 1773 edition of Mary White Rowlandson’s narrative of her 1675 captivity by Native people presents us with a puzzle, one historian Jill Lepore queried in her influential history of ... 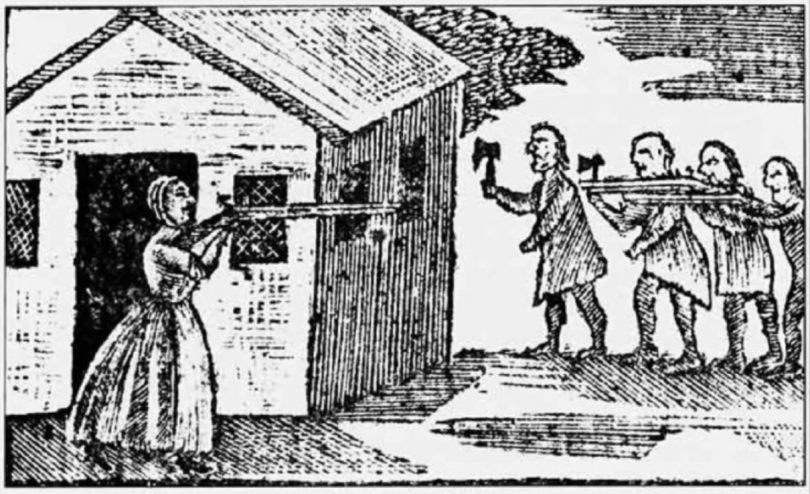 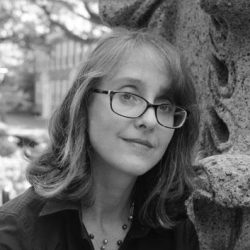 This image from the 1773 edition of Mary White Rowlandson’s narrative of her 1675 captivity by Native people presents us with a puzzle, one historian Jill Lepore queried in her influential history of King Philip’s War1: the woodcut image features a white woman armed with a rifle, defending her home from four hatchet-wielding men. Yet nowhere in her narrative, originally published in 1682, as The Sovereignty and Goodness of God: Being a Narrative of the Captivity and Restoration of Mrs. Mary Rowlandson, does the author mention having or using a firearm. What does this peculiar misrepresentation tell us about the history of violence in the United States? And perhaps more urgently, what histories does it obscure?

Rowlandson was abducted from her home in Lancaster, Massachusetts—just 30 miles miles west of where I write today—from territory that was already populated by Nashaway and Naragansett people when English settlers arrived in the 17th century. Contrary to contemporary whitewashed accounts of European colonization, this land was not peacefully shared, nor was it legally purchased, and the process through which Anglo-European settlers came to occupy the Americas was characterized by coercion and appropriation, not by mutual agreement and consent. The legacies of settler colonial brutality remain powerfully with us today, in the form of an inverted historical topography that exonerates the perpetrators of violence while laying accountability at the feet of its victims.

How Mary Rowlandson—who disavowed weaponry and violence—came to be pictured with a gun, some six decades after her death and on the eve of the American Revolution, speaks to the complex tangle of sexual and racial anxieties that fortified what would become “gun rights” in the future United States. Addressing the knotty puzzle of this nation’s particular relationship to guns and gun violence lies at the heart of historian Roxanne Dunbar-Ortiz’s devastating new book, Loaded: A Disarming History of the Second Amendment. In it, she disputes the notion that the Second Amendment’s “right of the people to keep and bear Arms” was intended to apply collectively, arguing instead that it “enshrined an individual right” under which white “individuals and families [could] form volunteer militias to attack Indians and take their land.” Loaded thereby challenges conventional wisdom on the Second Amendment’s appeal to a “well regulated Militia” as “necessary to the security of a free State,” anchoring it in the nation’s bloody struggle to displace Native people from the land while characterizing the violence as a triumph of civilization over savagery, order over chaos.

Loaded is a compelling antidote to historical amnesia about the brutal origins of the United States’ unique “gun culture.” Dunbar-Ortiz draws on decades of historical scholarship to illuminate the practice of Native genocide while framing the Second Amendment as the grounds for a violence-based nationalism. For example, she documents the proliferation of so-called “savage wars,” through which Europeans and Natives struggled over sovereignty and access to the land. Far from a confrontation between equal opponents, as the name implies, “savage wars” involved an armed campaign of brutality against Native communities—combatants and noncombatants alike—who stood in the way of Anglo settlers’ land acquisition. Hers is an account of settler colonial democracy based on sustained subjugation of nonwhites, followed by methodical erasure of the roots of the violence.

White supremacist representations of Native people as a threat to civilization provided a critical foundation for this national core ideology. Indeed, the nation’s first best sellers were captivity stories that dramatized a narrative of white (feminine) victimhood and Native (masculine) savagery. They depicted, often in salacious detail, the kidnapping of white women by Native men and the conditions under which captives survived and eventually returned to “civilized” society. 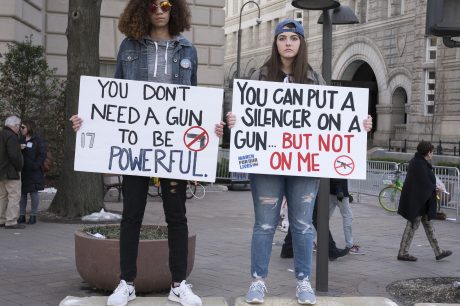 Mary Rowlandson’s was the first captivity narrative of note. An English colonist living in the Massachusetts Bay Colony, she was taken captive by Naragansett, Nashaway, and Wampanoag people during King Phillip’s War in 1675. Rowlandson spent eleven weeks and five days with her captors, losing one of her children to sickness along the way, before she was ransomed back to her community for £20. Seven years later, she published her story, which went through four printings that year and became an instant best seller in England and North America.2 Rowlandson’s book was so popular that it remained in print almost a century after its first publication.

Stories of white women carried off by “savages,” then sustained and redeemed by Christian civilization, met an eager audience among Anglo colonists. Through these and other tales of Native violence, settlers entertained, then deflected, the dreadful possibility that white womanhood could be made wild, white wombs coopted in the service of reproducing heathen—rather than Christian—children. The stories circulated widely as a form of what historian Jacqueline Dowd Hall has termed “folk pornography,” formulaic tales of eroticized violence.3

In its 1770 printing, Rowlandson’s narrative was accompanied by a woodcut image of a snugly corseted white woman in a tri-cornered hat, grasping the muzzle of a long gun. Captivity stories’ emphasis on imperiled white femininity not only masked white settlers’ far more pervasive sexual abuse of Native women, which began as soon as European men first set foot in the Americas; the recurring trope of white women’s potential corruption by “savage masculinities” helped justify extralegal violence against nonwhites.

The threat of captivity became a rallying cry for white settlers to arm themselves against perceived Native threats to social order and stability. According to Dunbar-Ortiz, pervasive fears of a Native menace to white settlement influenced the nation’s Founding Fathers when they crafted the Second Amendment to the Constitution.

Dunbar-Ortiz brings us face to face with the realities of Native genocide while proposing a revised understanding of the Second Amendment as the grounds for a violence-based nationalism.

In earlier research, Dunbar-Ortiz has shown how contemporary distortions of Native culture contribute to the erasure of Native histories, framing First Peoples as destined for extinction.4 US popular culture has long fetishized images of the so-called savage, concealing armed aggression against Native noncombatants under a history-bending veneer of nationalist virtue.

Such representational distortions run deep in the national psyche, feeding amnesiac understandings of the nation’s origins. A recent exhibit at the Smithsonian Native American Museum—pointedly entitled “Americans”—displays the uses to which images of Native people have been put as sports mascots, emblems of nutritional purity, and, in the case of the Savage Arms company, as icons of lethal power. Named in 1894 for its white founder, Arthur Savage, the company adopted as its logo an image of a Native warrior in profile, wearing a feathered headdress. The image branded Savage products for close to a century. The logo has since been replaced by a sanitized abstraction, but the company continues to furnish equipment to law enforcement across the nation. That fact is cruelly ironic, given the US Centers for Disease Control and Prevention’s recently released data showing that Native people are more likely than any other race or ethnicity to be killed in their encounters with law enforcement.

These representational and symbolic structures have long depended on and fortified the white supremacist foundations of US capitalism, which fostered both state-sanctioned violence and the production of armed white citizenship through the US Constitution’s selective distribution of rights. The figure of the Native—regardless of gender or age—became the “hostile” force against whom Anglo settlers justified an urgent need to arm themselves; the right to keep and bear arms originated as a right to eradicate Native communities in the name of white land acquisition.

Together, Native genocide and slavery depended on a state apparatus controlled by and accountable to an armed white masculinity that masqueraded its violence under appeals to “protection” and “self-defense.” Such appeals pointed to the vulnerability of white women, children, and property, framing white masculine violence as vital to protect the weak from innumerable “savage” masculinities. Early representations of white vulnerability have lasting implications, justifying the preservation of racial purity and the policing of white women’s consensual encounters with nonwhite men, all in the name of “protection.” 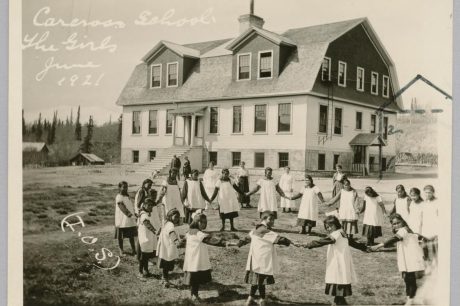 Perhaps most provocatively, Loaded is a potent indictment of the notion that the right to have and bear arms was ever intended for everyone. Firearms and the right to use them were concentrated in the hands of the property-owning few by design, at the calculated expense of the nonwhite, enslaved, and disenfranchised multitudes. Early depictions of white women with guns were one part proxy, one part propaganda. An armed white woman might safeguard the home in her husband’s absence, but her image also triggered fear in the minds of Anglo settler defenders of white property.

Mary Rowlandson’s specious portrait ciphered anxieties about external, “savage” threats to white homesteads and, perhaps more troubling, failures of white masculinity to live up to its heroic ideal. Contemporary appeals to armed white femininity sustain the myth of women’s vulnerability to savage strangers, even when women’s greatest statistical threat remains their own intimate partners. If today’s advocates for women’s armed “personal protection” are aware of these statistical realities, they know better than to acknowledge them. The gun rights lobby’s dog whistle invocations of violence from “thugs,” “gang-bangers,” and “criminal rapists” resurrect a seductive, not to mention lucrative, trope of reverse victimization that is older than the nation itself.

Featured image: from the title page of the 1773 edition of The Sovereignty and Goodness of God: Being a Narrative of the Captivity and Restoration of Mrs. Mary Rowlandson 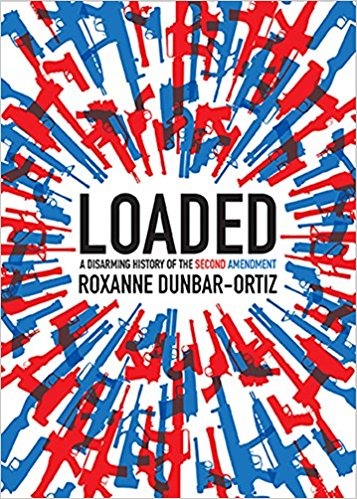 Loaded: A Disarming History of the Second Amendment