H. P. Lovecraft For Our Time
Fear of the other cuts both ways. A young woman in Brooklyn today is afraid to go outside. Even in daylight, and especially in the company of the pale white child ... 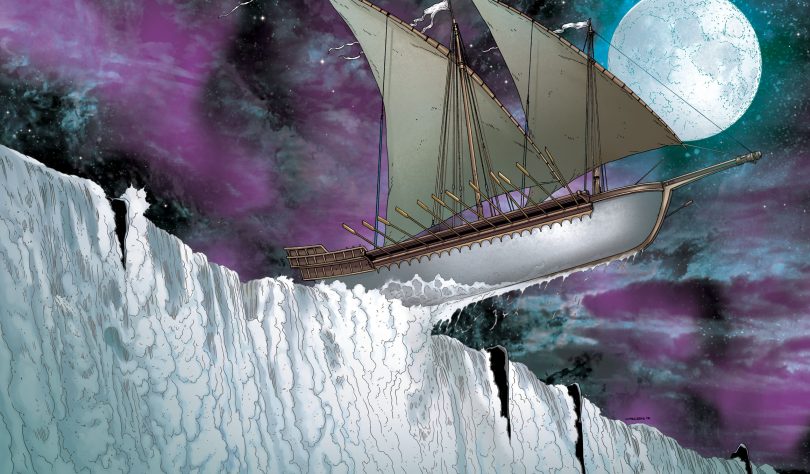 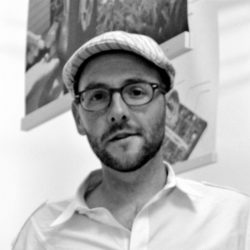 Fear of the other cuts both ways. A young woman in Brooklyn today is afraid to go outside. Even in daylight, and especially in the company of the pale white child who is her charge. Her own skin a darker shade, she fears standing out as a domestic caregiver, and thus as an immigrant. She has heard about the ICE raids, the checkpoints, the shakedowns and mass arrests, people torn from their families and sent away. She trusts no one, even in a community proudly defined by the people and culture that are her own. She feels, all of a sudden, a stranger in a land that has been her home for decades.

The increased threat of harassment and deportation since January is an added source of anxiety and dread in immigrant neighborhoods that are already troubled by poverty, prejudice, and insecurity. But the xenophobic sentiments of the current administration, the nativist, white nationalist ideology they speak to, and the ignorance and fear they are grounded in are as old as old Flatbush.

A little less than a century ago, such anxieties were very much on the mind of one Howard Phillips Lovecraft, a white man who would become one of America’s most influential horror writers. Moving in 1924 from his native Providence to live with his wife, a New Yorker, in Brooklyn, Lovecraft brought with him a fully formed racism and anti-Semitism (despite the fact that his new wife was Jewish) and a bitter ideological traditionalism in general. But New York amplified these sentiments. Here he found fresh inspiration for his xenophobia and racism, especially in Red Hook, with its dockside slums of the newly arrived. Lovecraft wrote throughout his short, miserable tenure in the city, in stories and voluminous correspondence, of the “crude, foreign hostility & underbreeding of New York,” the “squinting alienage” and “hopeless tangle and enigma” of the “swarthy strangers” that constituted its viscerally repellent population, and he railed ceaselessly against the defiling of American values he felt they represented. Themes of supernatural otherness in his work are inextricably bound to anxieties about immigration, miscegenation, and racialized cultural corruption.

H. P. Lovecraft seems to have been, as his longtime interrogator and interpreter Alan Moore has written, “an almost unbearably sensitive barometer of American dread,” whose writing reflects precisely the fears of the “white, middle-class, heterosexual, Protestant-descended males who were most threatened by the shifting power relationships and values of the modern world.” In this way, the eccentric horror writer was also, however problematically, a perceptive observer of America’s growing cities and new social problems—a kind of Robert Park or Upton Sinclair, but more fearful and mean.

Moore is no generous devotee of Lovecraft’s work. He has been deeply engaged with it for a couple of decades now, and has just as long been engaged in simultaneous tributes and critiques that darkly tweak and parody it in ways that would have made Lovecraft squirm. This is important in the context of the 80 years since Lovecraft’s death, during which generations of readers and scholars have mostly embraced his work with far too little critique. His almost entirely posthumous fame spawned an entire genre of weird fiction and a still flourishing world of interconnected, self-referential fantasy writing (the so-called Cthulhu Mythos) that is somewhere between a shared fictional universe and nerdy fanfic. Only quite recently has his work received a spate of explicitly critical engagements, which not only call out, but also probe and prod, Lovecraft’s racism and other faults. Indeed this has to some extent become a new standard of popular engagement with his work, at least as judged by prominent additions to the mythos last year (Victor LaValle’s Ballad of Black Tom, Matt Ruff’s Lovecraft Country), and a new biography (W. Scott Poole’s In the Mountains of Madness). Strangest among these, yet perhaps also the deepest and in some ways the most faithful, are the multiple projects by Moore and his collaborator, the artist Jacen Burrows, the culmination of which is the just-concluded 12-issue comic book series Providence.

If primarily an inquiry into Lovecraft’s writing and literary influence set in 1919, Providence is an ideal engagement with the author for today’s America. It is fitting, for one thing, that the story begins actually in New York, with a Jewish gay protagonist named Robert Black exploring the city of immigrants as a journalist. (In earlier, related work by Alan Moore to which Providence serves as a sort of conclusion-by-extended-prequel—The Courtyard and Neonomicon—protagonists include a woman and a black man, while the villains are racist psychopaths devoted to Lovecraftian cosmology.) As Black encounters characters and events from Lovecraft’s stories, Moore and Burrows continue to introduce themes and personalities that Lovecraft would have been uncomfortable with, including the sympathetic portrayal of many whom the writer vilified as monsters in his stories. The “unusual colony of unclassified slant-eyed folk” in “The Horror at Redhook” (1927), for instance (implied to be Kurdish Yazidis, today under persecution by ISIS), are subtly humanized in Burrows’ illustrations. In exploring Lovecraft’s The Shadow Over Innsmouth (1931), Moore and Burrows draw out its anti-immigrant and anti-miscegenation sentiments by showing explicit acts of prejudice and discrimination faced by the fish-faced townspeople (ultimately presaging World War II-era interment and genocide) as an oppressed minority. Providence likewise makes graphic the “unnamable” and “unspeakable” horrors to which Lovecraft alludes, including incest and rape. 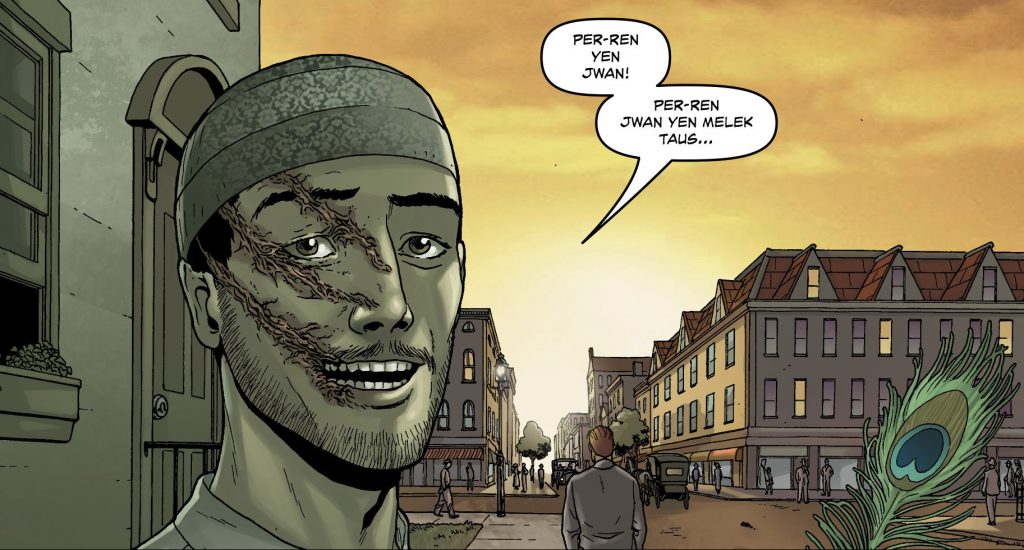 Following Black as he travels the Northeast in search of inspiration for a novel he hopes to write, the series puts a focus on the settings of Lovecraft’s stories, whether New York and Boston or fictional towns like Innsmouth and Arkham (which Moore anchors in the real world as Salem, Massachusetts, and Manchester, New Hampshire, respectively). All of these places are rendered beautifully and in great historical detail by Burrows: we see all the gables, steeples, and gambrel roofs of Lovecraft’s architecturally vivid writing, and even seemingly random streets and buildings are drawn so accurately that many exact locations can be identified on Google Street View. Of course the city of Providence, Lovecraft’s beloved home and the setting for some of his most famous stories, gets the spotlight it deserves. In these ways, the series highlights the fundamental role of both Providence and New York in shaping Lovecraft’s fiction, and his urbanism and spatiality more generally, tying them to his anti-modernism and xenophobia.

This is crucial, because Lovecraft’s racism, homophobia, misogyny, and general parochialism were unquestionably rooted in places, aesthetics, and an idiosyncratic sense of local culture. These are the differences between a genteel and gentile Providence—in which Lovecraft could wander blissfully through College Hill admiring traditional architecture and spouting off historical facts in the affected voice of an eccentric old man—and a defiled New York teeming with immigrants, a city having, as he once wrote, “nothing in common either with its own past or with the background of America in general.” Indeed, Lovecraft’s attachment to colonial New England and disgust with New York was very much of the “Make America Great Again” variety. New York both displeased and inspired him; his letters describe endless walks through Brooklyn and Manhattan, sometimes expressing wonder and other times an inclination to keep strictly to the middle of the street. He wrote three vividly creepy (and racist) stories about New York, and seemed to write thereafter with an increasingly precise emphasis on location. Of course, in Lovecraft as in Providence, traditional old New England is scary as hell too. Plenty of bad stuff goes down in Rhode Island, not to mention rural Massachusetts.

In all, it must be said, Moore and Burrrows are not such noble champions of Lovecraft’s maligned underclass monsters; Providence is a horror story after all, and our sympathy for the creeps that Black meets goes only so far. As the series develops and many horrors of Lovecraft’s stories are shown in the world of the comics to be real, even the sympathetic “swarthy hordes” of Red Hook and Innsmouth remain implicated in cataclysmically cosmic evil. Hector North, the story’s analogue for Lovecraft’s famous “Herbert West: Reanimator,” is a kindly, if sinister, closeted gay man who is persecuted for his sexuality … or is it for his efforts to raise the dead? (LaValle made a similar move more explicitly in Black Tom, first introducing a sympathetic black protagonist to a racist Lovecraftian world, then turning him into a terrifying villain.) Human morals and prejudices are—most Lovecraftianly—ultimately irrelevant here. In this way, as much as Moore and Burrows call attention to Lovecraft’s xenophobia, it cannot be said that they make much effort to dismantle it. 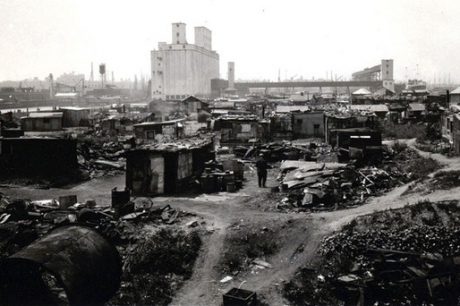 The story itself is an enthralling mystery, if one requiring patience of its readers in the way that much of Moore’s work does. In short, Black heads to New England to investigate the links between a shadowy colonial-era sect and a certain text of ancient occult wisdom, running, unbeknownst to him, toward a cosmically consequential encounter with H. P. Lovecraft himself. Each issue is split between the panel-by-panel narrative of Black’s increasingly strange adventures in Lovecraft Country and pages of hand-written diary entries from his commonplace book, in which he reflects on his experiences and jots down ideas. Some issues feel a bit fleeting, but we do get a strong sense of Black, a tragic antihero who goes looking for creative inspiration and becomes part of an exceptionally weird tale.

The creepiness that settles in over the first several chapters burns slowly, sparking with several very disturbing moments, before crescendoing quite effectively in the final act. Without spoiling the ending, suffice it to say that it turns in a direction back toward Moore’s larger metanarrative that will be satisfying to some and perhaps confusing to those with less background in the deeper Lovecraft-Moore canon. (Real-life Lovecraft biographer S. T. Joshi even makes an appearance.)

From beginning to end, Providence is deeply and thoughtfully faithful to the writings and their problematic author. In addition to visiting many of Lovecraft’s stories explicitly, subtler references and in-jokes for close readers and superfans are almost constant in both words and pictures. (Wonderfully pedantic fan sites, such as factsprovidence.wordpress.com, have dutifully parsed and annotated every panel.) 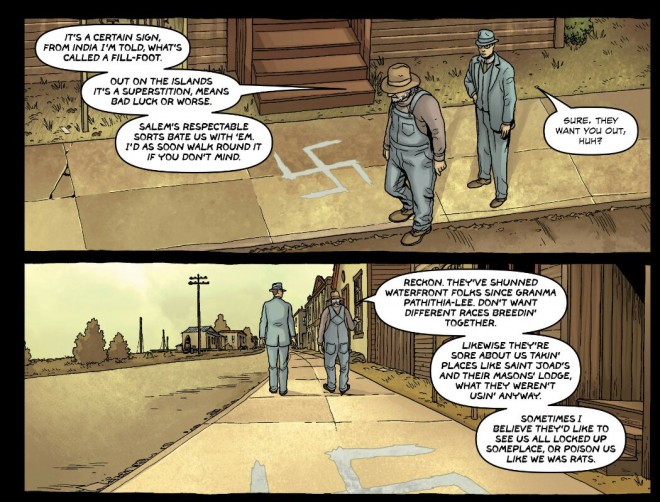 Providence is really about the origins of Lovecraft’s stories, and then the influence of these stories on our society. The series thus works to bestow a significance upon Lovecraft’s writings even as it calls attention to their meanness, and in a way strips him of some credit as their author at the same time. In its humanizing of the monsters and careful attention to detail and setting, Moore and Burrows highlight both Lovecraft’s xenophobia and his urbanism, showing us how connected these things are. Of course Moore is not the first to remark on the link between Lovecraft’s real-life fear of otherness and the alien terrors that he wrote about. But a certain spatial specificity is fundamental to understanding both, and is perhaps uniquely well suited to the comics form. This makes Providence a meaningful critical contribution, in addition to an enthralling narrative (at least for devotees of Lovecraft and of Moore).

Yet if the real horror of Lovecraft’s legacy is that we continue to regurgitate the same bilious, hateful sentiments that inspired him—now simply more visible at the fore of government—in ways that actually terrify those “others” that he so feared and despised, Providence exposes and exploits this for today’s readers, but doesn’t quite condemn or unravel it. Having played with them, Moore and Burrows instead, rather nihilistically, wrap these earthly hateful sentiments up with ostensibly grander otherworldly horror. The latter is so terrifyingly incomprehensible that it drives men mad, and yet, perhaps most disturbingly, it is itself quite indifferent to us altogether.

Featured image: All images here from Providence, written by Alan Moore and illustrated by Jacen Burrows. 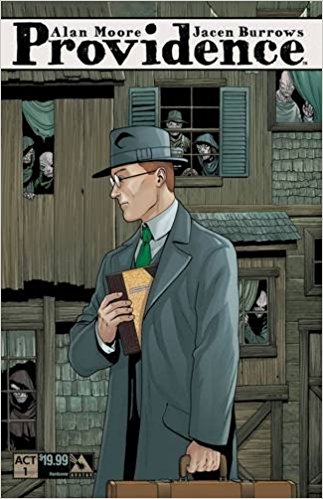 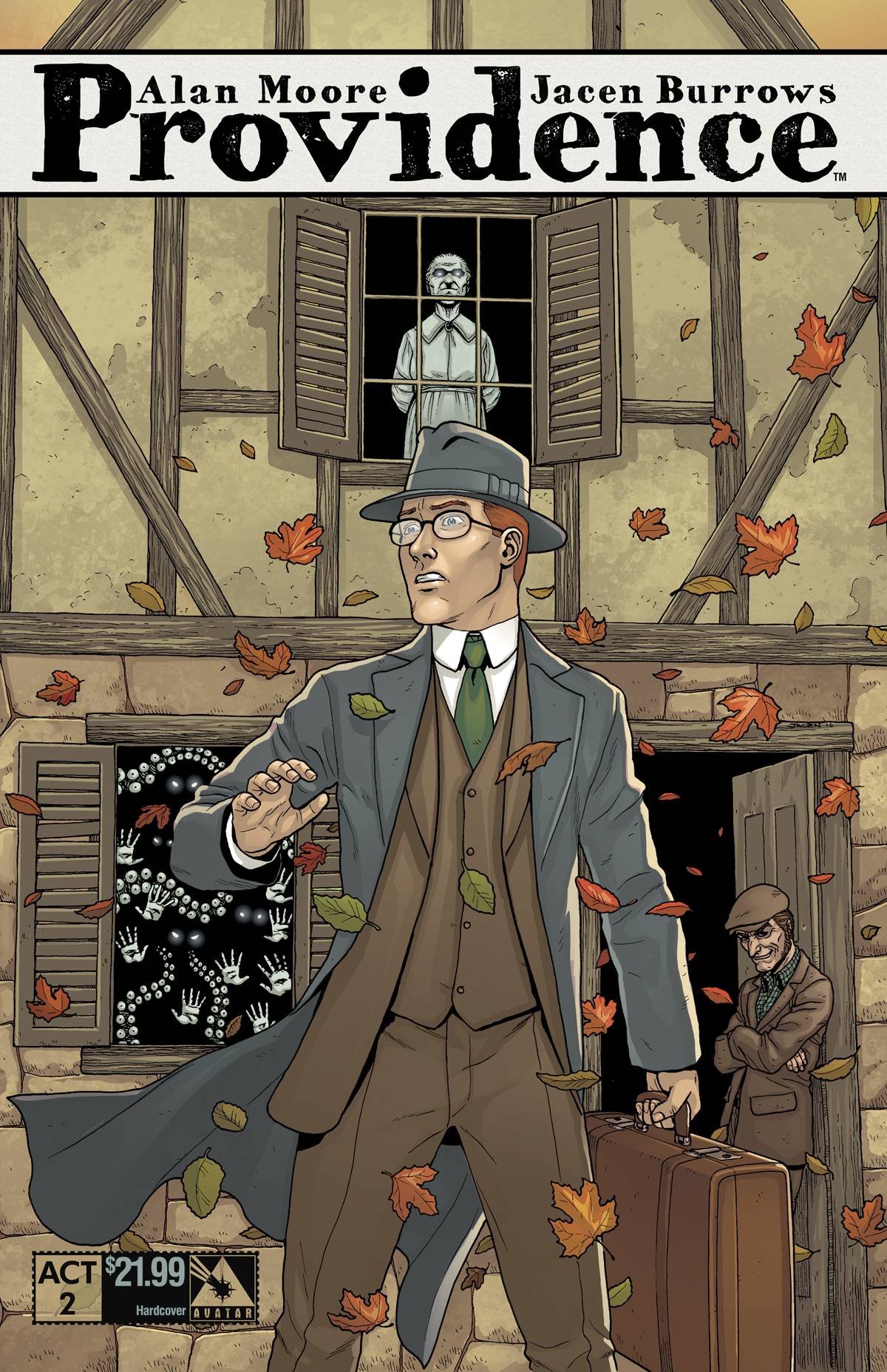 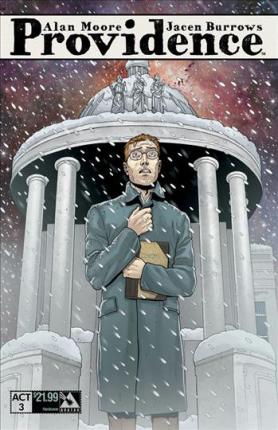