HBO Gets High (Maintenance)
The new season of High Maintenance premieres on HBO tonight. For those who don’t know it, the series was created by Katja Blichfeld and her husband, Ben Sinclair, who also stars as the main ...

The new season of High Maintenance premieres on HBO tonight. For those who don’t know it, the series was created by Katja Blichfeld and her husband, Ben Sinclair, who also stars as the main character—a bike-riding marijuana dealer who makes house calls all over New York (though mainly Brooklyn), known only as “The Guy.”

Each episode follows the adorable helmet-wearing criminal into the home of a new cast of characters who need weed. These deliveries expose him to a cross section of people and implicate him in their various high jinks, bullshit, joys, and tragedies. Some people begin to reappear peripherally in later episodes, creating a sense of an intricately networked city. The result is a modern mash-up of picaresque and comédie humaine
that frequently approaches high art. (In two senses, I guess.)

Blichfeld and Sinclair began rolling out High Maintenance on Vimeo in November 2012. Since then, they have released 19 webisodes, and last year they announced (on 4/20, much to the delight of their followers) that the show had been picked up by HBO. Expectant fans know the show’s move to cable from its “very DIY” and “real scrappy” beginnings (to quote Blichfeld and Sinclair respectively) will bring changes. On one hand, putting HBO-sized money behind their taste and talent—Blichfeld was nominated for an Emmy for casting 30 Rock—could yield very cool results. There are promising signs: HBO helped them make promo materials for the new season, including this poster and the trailer below, that feel true to the show’s aesthetic.

On the other hand, those who know and love the original web series, with its pithy episodes, mostly in the six- to ten-minute range, worry the show might lose its energy and pacing when standardized into the half-hour cable format. (See Slate’s “Please, HBO, Don’t Ruin High Maintenance.”) Starting the show as a web series meant limited resources for Blichfeld and Sinclair, but the payoff was a kind of formal freedom that’s rare in mainstream TV production. They used it, among other things, to pursue a creative truth not friendly to TV programming: namely, that not all stories worth telling fit the same scale.

Tonight, with the premiere of the first of six new episodes, we’ll get a glimpse of how Blichfeld and Sinclair plan to handle their new platform—both its strictures and its opportunities. If you don’t have time to catch up on the originals or just need a refresher, here are some highlights from the existing seasons. 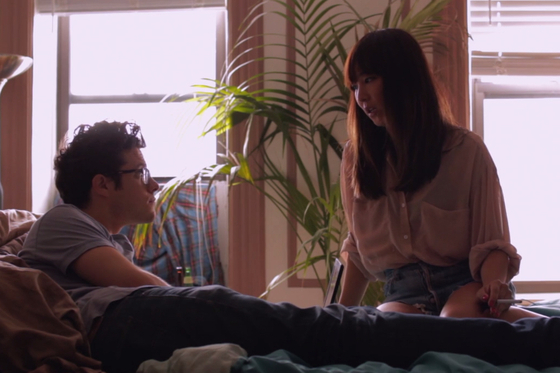 This episode demonstrates one of Blichfeld and Sinclair’s signature creative moves: blending high and low. It tells the story of “Homeless Heidi” (Greta Lee), a woman who uses a rotation of five designer outfits to trick OkCupid dates into housing her for weeks at a time. This con isn’t immediately clear to viewers; instead, it emerges through a thoughtful interaction between The Guy and Heidi’s current dupe, Mark (Kyle Harris), who calls for “maintenance” on her request while Heidi is out at the Bedford Cheese Shop buying Iberico ham and taleggio for brunch (with his money).

While waiting for Mark to select from the available varieties of green, The Guy notices some freshly laundered bras drying around the apartment and asks, “where’s your lady friend?” When he finds out they’ve broken up, he points to the bras and says, “Well who’s this? Ooh la la.” Mark tells him he met a new lady on OkCupid he thinks might be “the one,” and shows him a photo.

“How do you know this?” Mark says.

Realizing Mark is upset, The Guy kindly offers him consolation—“here, take an edible.”

The Guy is someone who remembers your girlfriend and asks about her, and who has your back when he thinks you might be getting played by an OkCupid freeloader. Despite being a potential felon, he’s the most stable character in the series. He’s a pillar of emotional support whose knowledge of people and his community makes him something of a sage. Throughout the series, his kind temperament and surprisingly firm ethics take center stage, debunking the myth of the nefarious weed dealer—at least a little bit. 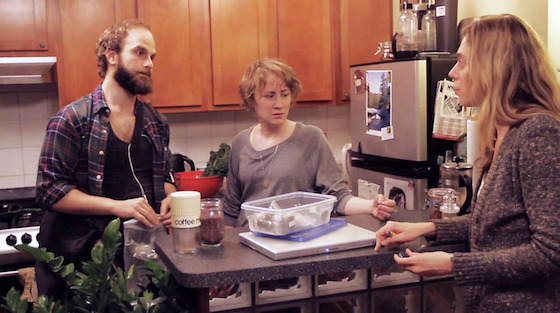 “Jamie,” one of the early, tightly packed six-minute episodes, captures one of the most interesting aspects of the show: the way it manages to showcase the culture of young Brooklyn with both affection and scrutiny. The scene opens on two women, Brenna and Molly, cooking together in a kitchen replete with kale, a full spice rack, and a framed poster reading “We are free people; Occupy Wall Street Now.” Brenna tells Molly to “put on Fleet Foxes,” but before she can, they hear the sound of a trapped mouse screaming in a glue trap.

They Google instructions (cover the mouse in oil to ease it free), but one of their oils is “from the vineyard in South Africa” (too expensive) and the other is chili-infused (“It will hurt Jamie”—Brenna has named the mouse). When spraying Jamie with Pam doesn’t work, they crank up Bon Iver and order weed to calm their nerves. The Guy arrives and matter-of-factly suggests, “Well, just kill it,” pointing out the hypocrisy of keeping it alive to suffer. But Brenna replies, “This is not an apartment where things die. This is an apartment where things live. We do not torture in this apartment, and we do not kill.”

She eventually brings herself to condone the mouse murder, but delegates the dirty work to The Guy. This scene gets at the pitfalls of a kind of idealism many think of as particular to millennials, a binary way of thinking—kill, or don’t kill—that can’t handle the complicated compromises of the real world. Yet it’s all managed with a light, comic touch, and Brenna remains likable in spite of her ethical failings. 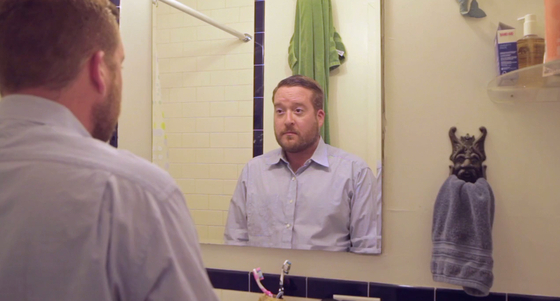 High Maintenance doesn’t just redeem the figure of the weed dealer. It works against the stereotyping impulse in general. Sinclair describes this core value in the directors’ commentary that HBO produced for each of the old episodes: “Early our attitude about making this show was that we kinda want to have a non-judgmental outlook and … treat pot smoking and any other behavior that has formerly been kind of demonized as just … part of our lives.”

“Helen” is a case in point. It centers on an agoraphobic gay character, Patrick (Michael Cyril Creighton), whose time is divided between caring for an invalid mother, making fan art of Helen Hunt, and shopping online for clothes and skin care products. Part of what motivates this latter activity is that Patrick, housebound as he is, can only get the interpersonal connection he craves by interacting with delivery people. The Guy holds a special place in his social framework, which we learn through an introductory montage—a tool Blichfeld and Sinclair successfully evacuate of its sentimental ethos, using it to establish circumstance and character economically in these early short episodes.

The montage shows Patrick preparing for their visit days in advance, ordering a new shirt and groceries to make peanut butter and jelly bars as an offering. When he tentatively comes onto The Guy through an elaborate ruse involving “losing” (planting) his wallet in the couch, The Guy is thrown for a second but responds gently. It’s this moment when the show—originally intended to be a comedy, according to Sinclair—tips into the unglamorous tragedy of everyday life. In a painful moment in the final frame, after The Guy leaves much sooner than Patrick had hoped, we see Patrick place the baggie he’s just purchased in a carved wooden box full of others, all of them untouched by his sick mother. 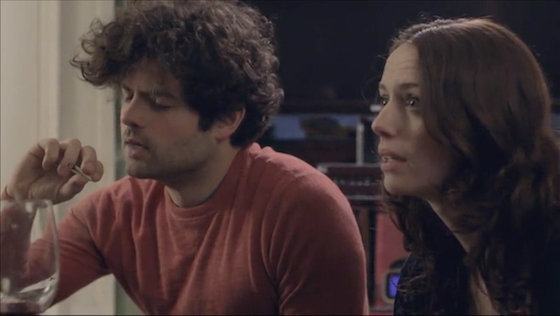 “Dinah,” the first episode to break 10 minutes, is about a young couple hosting a bed-hopping, root-vegetable-cooking college friend named Chad (Chris Roberti). Sinclair describes Chad as “an amalgamation of any kind of manic pixie dream boy, millennial soft boy—who … thinks that he’s giving you, you know, sensitivity, but really he’s just a narcissist.”

Annie (Kether Donohue) and Kabir (Azhar Khan) are caught up in the domestic bliss of young coupledom, but also in the grind of New York City: he’s working all hours as an emergency room doctor and dealing with an apparent binge-eating disorder, while she’s busy studying for the LSAT. Chad descends on their household for the wedding of a mutual friend and wreaks havoc, bringing strangers home for NSA sex on the blow-up mattress and making both his hosts—particularly Annie, who seems to have a real hate-on for Chad—confront the grown-up choices that have, in their case, led to a comparatively bleak bedroom situation.

When a snowpocalypse-style storm leads one of Chad’s hookup friends to hole up with them for a few days, it comes out over root-vegetable stew and “space cake” (supplied by The Guy) that she’s in an open marriage. Annie asks, more cattily than sincerely, if she ever gets jealous. The woman’s drippy answer—that it’s “all love” and mostly between friends—leads inadvertently to the episode’s literal punch line, when Chad gets what’s been coming to him. “I mean, you guys used to fuck,” the woman says, referring to Annie and Chad, “and that’s not a problem.” We only see Kabir lunge across the coffee table before the frame switches to a shot of him being woken by his pager, amid a ruin of space cake crumbs. 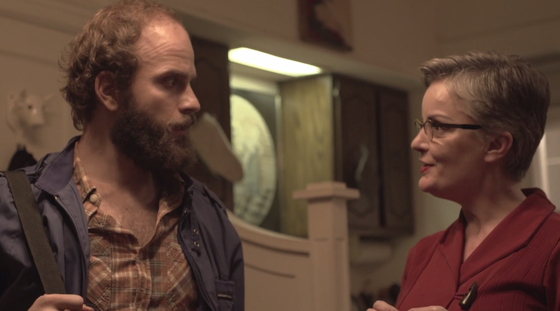 The concept for “Brad Pitts,” which Blichfeld and Sinclair describe as “a mature moment for the show,” was prompted by their desire to show characters who were new to pot. They also wanted to tip their hat to its more medicinal properties. Using their non-pot-smoking moms as models, they created the characters of Ellen (Birgit Huppuch), who is being treated for stomach cancer, and her spunky friend Ruth (Jennifer Smith). When these two Upper West Side birders decide to try pot to get Ellen’s appetite back, they “have [themselves] a funky little ladies’ night” in the process. In the sequel episode, “Ruth,” Blichfeld and Sinclair marshal their talents for comic bathos toward the most striking TV scene in my recent memory: less than an hour after disclosing the news of her stomach cancer to a new guy she’s dating, Ellen finds herself dipping his balls—which he unfortunately handled after chopping jalapeños—in take-out containers full of milk. It’s their second date.

One of the delightful perplexities of this show is how, despite its episodic nature and perpetual turnover of characters and themes, it manages to feel so coherent. Part of that surely comes from the distinctive aesthetic created by Blichfeld and Sinclair. But it also owes a lot to The Guy, who paradoxically provides a center of gravity from his position on the periphery. This detached perspective lets him see the diverse humans populating the show for who they are rather than simply for what they do. He has no name, and other than the fact that he has a niece, we know almost nothing about his life story. Will any kind of narrative core be developed for The Guy in the upcoming season? And if so, will the show still work as it has in the past? We’ll begin to find out tonight. I have high hopes.