How To Catch a Philippine Serial Killer
F. H. Batacan’s Smaller and Smaller Circles, a gripping crime thriller, winner of the prestigious Philippine National Book Award and until now available only in the Philippines, begins with the ... 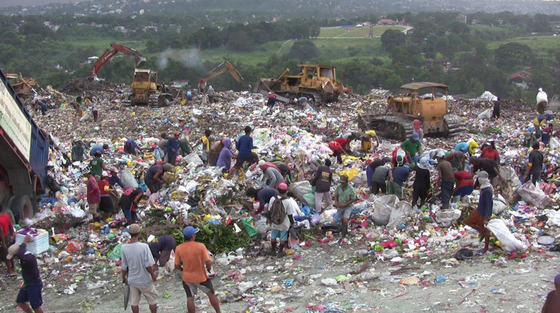 F. H. Batacan’s Smaller and Smaller Circles, a gripping crime thriller, winner of the prestigious Philippine National Book Award and until now available only in the Philippines, begins with the effluvia of decaying muck. “Awful vapors rising lazily with the heat,” writes Batacan, “wet paper and rot and excrement mixing in a soup of odors around them, above them.” The stench is omnipresent, bilious. It steams up from the hundred-foot mountain of garbage in Payatas, Manila’s notorious dumping ground. In the novel’s prologue, a local priest runs up this swampy slope with his “slum kids”—children who sift through the smoldering heap of trash for anything of value—to discover, lying face down on the mud, the body of a murdered boy. When the priest turns the corpse over, he thinks for a second that it is moving, but realizes that swelling out from inside it are thousands of maggots, eating away at the wounds where the boy’s heart had been gouged out, his genitals hacked away, his face peeled from the chin up.

Batacan’s novel, like the dumping ground where it is set, is not for the squeamish. In her first foray into the surprisingly sparse genre of the Filipino crime novel, Batacan brings to bear her prior experience in Philippine intelligence and journalism to probe some deeper truths about Payatas. Formerly a ravine surrounded by rice paddies, Payatas today is a landfill where Manila sends up to 1,700 tons of its municipal and commercial waste each day. This continuous stream of garbage has produced a wretched geological formation of its own: decomposing layers of compacted debris that release methane and other carcinogenic chemicals into the air and leachate into the soil. Tens of thousands of Manila’s urban poor have built squatter settlements around, and on, this toxic mass. Flung out onto the margins of society like the trash that they are forced to live on, they’ve reclaimed the garbage mountain as a place of refuge. Focusing on this disenfranchised community, Batacan harnesses the crime novel’s obsession with death to shed necessary light on the vulnerability, and dignity, of these Filipinos’ lives.

Smaller and Smaller Circles centers on Gus Saenz and Jerome Lucero, two Jesuit priests, respectively trained in forensic anthropology and clinical psychology, who have been handpicked by the Philippine National Bureau of Investigation (NBI) to help root out the killer of Payatas’s boys. As men of God and of Reason, Fathers Saenz and Lucero are keen on the abuses of the state and the church. They call attention to the NBI’s bureaucratic inefficiencies and its “trust and integrity issues, going all the way back to the dark days of the dictatorship.” In such a context, the priests-turned-detectives embody an ethical imperative that insists that “these children are just as important as your celebrities and politicians and bankers.”

Saenz and Lucero are also able to rise above the hypocrisy of the church, voicing an internal critique by questioning their superior’s systematic negligence concerning reports of “inappropriate conduct with minors.” The story of one Father Isagani Ramirez, who, in light of the molestation charges, has been transferred from one parish to another, each time placing him in “a position of even greater access to and power over children and preteens,” serves as a story of violation that parallels the Payatas killings. Although this subplot all too quickly recedes into the background, it contributes to the novel’s gothic sense of dread. “That’s the nature of any kind of rot,” Father Saenz says. “If you don’t stop it, it keeps going. It will keep going until it destroys the very organism that feeds it.”

BATACAN’S STYLE MIMES THE FORENSIC CASE SUMMARY, WHOSE STRIPPED-DOWN, DISAFFECTED DEPICTION OF BODILY VIOLENCE, IN HER HANDS, SERVES AS THE VERSO OF FILIPINO MELODRAMA.

Smaller and Smaller Circles’s 54 chapters are lean and episodic and spin themselves out with the rapidity and compactness of a movie storyboard. Most are set in the high monsoon month of July 1997, whose tropical rainstorms encumber the Payatas investigations (though at points the rain can feel instrumentally staged for noirish effect). A flashback to May bends the otherwise linear narration and shapes the first quarter of the novel into its nucleus, offering prefatory contexts for the killings, witness interviews, and the personal and academic backgrounds of the priests.

The flashbacks not only provide exposition; they also allow Batacan to forge the crime novel into a work of social criticism. Her target is the popular perception that there are no serial killers in the Philippines. The issue, she suggests, is less a question of empirical reality than of infrastructural intelligibility. Serial killers exist, but escape notice because Philippine law enforcement lacks the basic techniques of information gathering and processing to extract common patterns from “the particulars of murders committed at different times or places.” You can hear Batacan’s training in journalism (and perhaps her frustrations with the Philippine intelligence community) when she writes the following:

Crime statistics are chronically underreported or misreported across the country, as law enforcement officials at every level try to massage the numbers to create the illusion of better performance. Discrepancies have been estimated in as many as 60 percent of crime incidents, with some station commanders seemingly more interested in staying in office or snagging promotions than in presenting a true picture of criminal activity in their areas of responsibility.

By dint of their fortitude and fastidiousness, Saenz and Lucero address this national lacuna, gathering and poring over evidence from the crime scenes and extrapolating clues from the autopsies of the murdered boys that they themselves perform. Their investigations proceed according to the etymological meaning of autopsy, autopsia, “a seeing with one’s own eyes.” Patterns begin to emerge. The killer pounces on his victims on the first Saturday of the month. He fillets the boys’ internal organs and genitals with methodical precision. The stripping of their faces, the priests conclude, is not gratuitous: it is the killer’s “central symbolic act.”

The autopsy examinations represent the kind of retrospective composition—total, scrupulous, precise—of the “true picture” of crime that evades the grasp of Philippine law and intelligence agencies. This careful piecing together of clues makes up most of the novel’s action, which Batacan elegantly narrates in a style approximating what Mark Seltzer calls “forensic realism,” or the “deadpan and dispassionate description of horrors” that strives to show how “the spectacle of the torn and open body is also the conversion of bodies into information.”1 Batacan’s style mimes the forensic case summary, whose stripped-down, disaffected depiction of bodily violence, in her hands, serves as the verso of Filipino melodrama. Consider, for example, the following description: “He slits the throat just under the chin, from ear to ear.” It is almost in that sentence’s comma alone in which you see the flesh split open.

Batacan’s winnowed sentences create, in a phrase from the novel, an “atmosphere of secrecy and unease,” and the progressively constricting sense of space and time that gives her book its title. At times, however, the simplicity of the prose can seem either exaggeratedly spare (“There is a small wooden table in the middle of the room, with two wooden chairs on opposite ends of it.”) or read like directions in a screenplay (“Jerome folds up the umbrella, props it up against the wall in a corner beside the door, looks around.”).

Yet in between some of the chapters, Batacan lets in another narrative consciousness. In contrast to the omniscient narration, which cleaves too tidily to the crime novel’s naturalistic conventions, this voice, in the first-person, is more elusive. Its elliptical quality is reflected in Batacan’s decision to break apart its speech into blocks of text that are reminiscent of the stream-of-conscious interludes in Wilfrido D. Nolledo’s underground Filipino classic, But for the Lovers. For example:

Italicized and rendered as though they were floating on the page, the few words we get of its speech are marked neither by place nor by time. As we become acquainted with this haunted, haunting presence, we grow uncertain whether the voice belongs to the killer or to one of his victims. Part of the novel’s suspense lies precisely in how Batacan manipulates this voice. Its tone shifts from the plaintive and lugubrious to something sulkier and menacing, only to slink back into silence. When this solitudinous world catches up with the primary narrative of the Payatas investigations, Batacan’s structural trick succeeds in becoming her novel’s stylistic and dramatic highpoint.

In Smaller and Smaller Circles, the manhunt for the Philippines’s “first” serial killer turns out to hinge on questions less tactical than ethical: When everything that makes a person recognizably human is taken away, how do we measure our responsibility and accountability to that person? What potentially life-saving modes of empathy are available to us when we are confronted with a life that exists near death? Does the crime belong to the social system as much as the killer, if that social system values some lives over others, or considers them from the start already dead? Batacan’s brilliance is to have knitted these difficult questions together into the plot itself: catching a serial killer who has “become part of the everyday pattern.”