“I Just Wanted People to Hear my Voice”: An Interview with Holly Woodlawn
On December 6, 2015, Holly Woodlawn, the film and cabaret performer known as one of the Warhol Superstars and an inspiration for Lou Reed’s famous song “A Walk on the Wild Side,” died of cancer ...

On December 6, 2015, Holly Woodlawn, the film and cabaret performer known as one of the Warhol Superstars and an inspiration for Lou Reed’s famous song “A Walk on the Wild Side,” died of cancer-related complications at age 69. It was a sad day for me.

I interviewed Woodlawn (born Haroldo Santiago Franceschi Rodríguez Danhakl in Puerto Rico in 1946) over a decade ago as part of the research for the fourth chapter of my book Boricua Pop: Puerto Ricans and the Latinization of American Culture (2004). Titled “From Puerto Rico With Trash: Holly Woodlawn’s ‘Low Life in High Heels,’” my aim was to understand why Puerto Rican performers like Woodlawn and Mario Montez were among the most popular and insightful of queer film underground actors in New York during the 1970s, pumping new life into urban culture, underground cinema, and the ridiculous-theater tradition. I came to see that the power of Woodlawn’s performance emerged from the heartfelt ways that she played off different languages, cultures, and histories in her claim to beauty and dignity as a Puerto Rican transgender woman.

I first approached Woodlawn in 2002 the old-fashioned way: by letter. It took six months to settle on a date to speak on the phone because I was broke and Woodlawn requested payment. I was also a bit afraid. It was nerve-racking to talk to someone with such a reputation as a sharp wit about a topic she knew so much about: her life. I wondered: Would my questions about Puerto Rican identity bore her? Would she find my analysis of her work narrow or limited? What if I was totally off? I would find out soon enough.

Frances Negrón-Muntaner (FNM): There is some confusion about your racial and ethnic identifications. Do you identify as Puerto Rican?

Holly Woodlawn (HW): Yes. I am very proud. Puerto Ricans were very put down in New York in the ’70s, although people didn’t think I was Puerto Rican because I was white. They would always say, “You don’t look Puerto Rican.” But I was never ashamed. Puerto Ricans are so beautiful!

HW: Yes. Everything about it is Puerto Rican culture: humor, loudness, melodrama. My early years were in Puerto Rico and I had a very happy childhood with my extended family, although my grandfather had two families—drama! Eventually I became bilingual and American. Without American culture I could not be what I am. But Lola Flores made me! I don’t see my drag as coming from white Hollywood. I see the two cultures as different. I hope that Puerto Rico never becomes a state!

FNM: How does queer identity intersect with Puerto Rican identity? Do you think that being queer and Puerto Rican helped or hindered your career? It seems that Latina performers were more visible than other groups in the 1970s.

HW: I came out as a kid. My father was more understanding but my mother had a typical Puerto Rican response: she was concerned with “what will the neighbors think?” So, I ran away and met other Puerto Rican queer runaways in New York.

White people found Puerto Ricans attractive because white culture is dull and boring. Puerto Rican queens could be violent, it was a sort of defense. But Black people made whites more nervous. So, Spanish culture was the “pepper.” The Puerto Rican drag queens were so exciting. They would work a year on their gowns to go to the [drag] balls.

FNM: Your work is much richer than the Warhol Superstar label. What were your goals as an artist?

HW: I never wanted to be a Superstar, I just fell into it. Glamour is powerful because it is all about sex, money. All the women are out there for the men to see. What about the girls? I got into drag because I looked prettier that way. It made people look and I was more attractive to men. But I was not a drag queen. I was an actor. I loved performing because it makes people feel something and laugh. Laughter makes people happy. 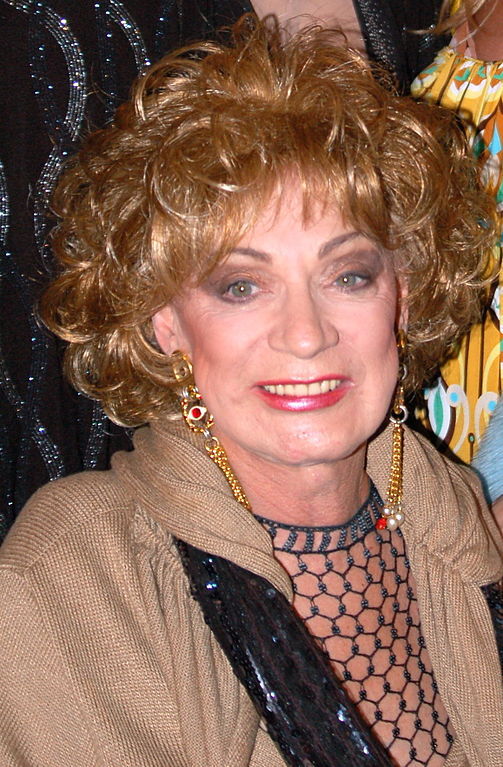 Holly Woodlawn in May 2007. Photograph by Angela George / Wikimedia Commons

FNM: Your improvisation in Trash (1970) is a great example of what you brought to the Factory films. In your scene with the welfare worker, where he demands your shoes in exchange for assistance, you dramatize how people of color are often shamed for requesting state support. How much of the script is yours?

HW: That was all mine, I had been on welfare. I preferred to work but I was an actor. If I couldn’t work, I needed to go on welfare. So, I did the movie just to work and [Paul] Morrissey provided the scene. He called “cut” when I refused to give the welfare worker the shoes and asked, why wouldn’t I give him the shoes? I answered that I didn’t give him the shoes because I had dignity. Morrissey said, “OK,” and we moved on.

FNM: How about the notorious scene when you have sex with a beer bottle?

HW: The beer bottle was my idea. I couldn’t think of anything else to do. My character wanted Joe [played by Joe Dallesandro] to go “straight,” but it wasn’t happening!

FNM: Several scholars, including myself, see much of the performative work done by people of color for the Factory as extractive. The Superstars often went to great emotional and physical lengths to create meaningful lines and characters but were not appropriately compensated or recognized. How did you experience this?

HW: Warhol never spoke to me on the set. And he was cheap. The only thing that I ever heard him say was, “You are so fabulous.” But I love to work—if I enjoy it. The worst was when I went to LA to become an actor but opportunities weren’t there. I came back to Florida to be a busboy and it was humiliating. That’s when [Jeff] Copeland called about doing a book.

FNM: Your book, A Low Life in High Heels (1991), was a great discovery for me. It had much of the humor and critique that made you a compelling performer in film and on stage.

HW: I didn’t actually write the book. Jeff recorded our conversations. But everything in there was mine. Unfortunately, the book did not do well. I had to do my own book tour! But it was worth it. I just wanted people to hear my voice.