In the Desert You Can’t Remember Your Name
“If I didn’t bomb some place, how would she save that place? … If I didn’t obliterate cities, who would build refugee camps?” War’s futility, absurd bureaucracy, and ... 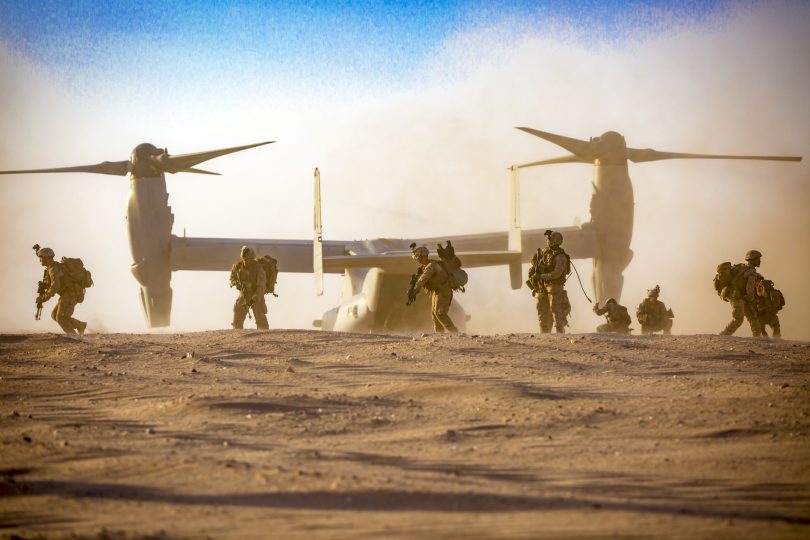 This is the 15th installment of our series An Engineer Reads a Novel.

“If I didn’t bomb some place, how would she save that place? … If I didn’t obliterate cities, who would build refugee camps?” War’s futility, absurd bureaucracy, and perverse moral rationalizations like these are made newly relevant in Mohammed Hanif’s sublimely sardonic novel Red Birds.

Hanif, like Joseph Heller, finds the black humor in his story of a place and a people undone by perpetual war-making. Hanif’s debut novel, A Case of Exploding Mangoes, satirized the Pakistani military-industrial complex. Red Birds never names its setting, which could plausibly be one of several desert/deserted locations. “This place may look poorer than Afghanistan, and more violent than Sudan, but thank god there is no ideology at stake,” one cynic observes. The systems of war comprise the local economy and social structure; Hanif’s characters are either resigned to this, looking to capitalize on it, or both.

A chorus of voices trade verses. There’s Momo, a hustling 15-year-old “entrepreneur,” and his dog, Mutt; each of Momo’s parents; and an American pilot, Major Ellie, who has crash-landed in the desert.

“A ripped parachute and regulation sunglasses were all I had found on my bruised ass when I came to,” Ellie notes before performing an inventory of his survival kit. “They give you a 65-million-dollar machine to fly, with the smartest bomb that some beam rider in Salt Lake City took years to design, you burn fuel at the rate of fifteen gallons per second and if you get screwed they expect you to survive on four energy biscuits and an organic smoothie.” In Ellie’s voice, Hanif can skewer the semi-ridiculous training protocols (“Cultural Sensitivity 101” and “Desert Survival Level 6B,” a “Basic Good Manners with Tribals” module), whose self-important capitalization underscores their absurd inadequacy. 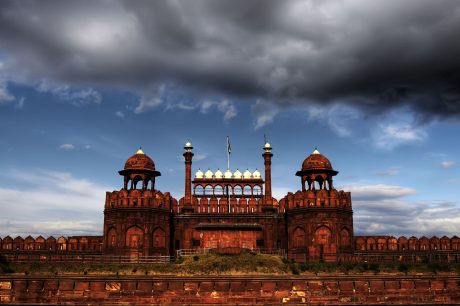 The Indispensable Anger of Arundhati Roy

The local teen, Momo, is also a source of subversive wit. He is anguished over the disappearance of his older brother, an electronics and radio whiz, and suspects he has been stolen by the Americans. His brother’s absence has shaken Momo’s faith, kept him from becoming a “relapsed teenage fanatic.” At their refugee camp, his family is hosting a USAID consultant “conducting a survey on post-conflict conflict resolution strategies that involve local histories and folklore.” Momo resists being studied and catalogued as a specimen of the “Teenage Muslim Mind”—“We shall see who is gonna interview who.” It’s not hard to imagine this project gaining a few capital letters and becoming one of Ellie’s training modules.

Indeed, the two men are naturally paired, both attuned to the absurdity of their nations’ conflict. Momo dreams about Ellie before he meets him—“I’ve been dreaming of a man falling from the sky.” The novel brings them together inventively, and we come to understand other parallels: as Momo mourns his missing brother, Ellie is distracted by thoughts of his estranged wife back home.

But as much as the two men seem to be simpatico, the war has put them at odds and made it difficult for either man to be more than a symbol of his nation to the other. Momo remembers the blinkered swagger of the American soldiers: “It looked awesome, the way they came out of the Hangar, an armoured car in front, a soldier standing on it, gun cocked, visor on the helmet lowered, their radio crackling. They always looked straight ahead, as if nothing on their left or right interested them.” Hanif reminds readers of the humanity of those reduced to case studies and bullet points in Ellie’s training, of what it feels like to be forever in the blurred peripheral vision of these well-resourced foreign soldiers.

Like Momo, readers have seen the “awesome” Western soldiers as the heroes of too many war stories. From the first chapter, I half expected Ellie to find within himself an inner Stringer—the heroic aeronautical engineer who rebuilds the downed plane in the desert in Flight of the Phoenix.1 I thought Ellie would be good with his hands, a capable cowboy, like Chuck Yeager. Surely he must have had The Right Stuff:

A man should have the ability to go up in a hurtling piece of machinery and put his hide on the line and then have the moxie, the reflexes, the experience, the coolness, to pull it back in the last yawning moment—and then to go up again the next day, and the next day, and every next day, even if the series should prove infinite—and, ultimately, in its best expression, do so in a cause that means something to thousands, to a people, a nation, to humanity, to God.2

All Ellie needs is some duct tape, this reader told herself; then he’ll roll up his sleeves and get to work. He’ll make this right for Momo and his family. He’ll pour his own desire to live into a resurrected machine.

But Hanif subverts those expectations. Ellie is hapless and adrift. His own failure to act—heroically or not—confuses him further. He remains convinced of his own superiority to the dudes who designed his flight training, “lots of moving targets, dreamt up by some kid who’d never seen the inside of a cockpit but had watched plenty of video games.” In this, he inhabits the modern military conflict between old-school trenches and dogfights and the techno-optimistic, remotely piloted drones of today.

Ellie also self-righteously resents the USAID researcher: “She belongs to that civilian world of eternal deceit, of well-earned loneliness, people wanting to arrive somewhere without risking the journey.” Her work allows Ellie to rationalize his own acts of aggression: “If I didn’t bomb some place, how would she save that place? … If I didn’t obliterate cities, who would build refugee camps?”

Here the engineer winces. How many of our technologies have been designed in the service of or been entrained into the military-industrial complex? How much destruction have we been party to—have our ideas wrought? The first American university to offer a degree in engineering was West Point. Theories of projectile motion, including the Magnus effect that explains curveballs; the telescope; Siri; and the power of rocket and jet engines were all developed in the context of conflict. The notion that pure, objective science got corrupted by politics is a fairy tale.3 Some high-profile astrophysicists act like they just discovered this connection, and are shocked, shocked to find out militarizing was going on in the back room of Science Club.4

Well, so what? some swaggering techno-chauvinists may sniff. It’s engineers who build civilization, so it’s only fair we are also among its defenders. Yet engineers have a social responsibility, a professional code of ethics. You could argue that developing drones—less risky, less expensive, more precise—was a moral act, though drone warfare also distances the deployer of the damage from its consequences in ways that may make damage more likely, to say nothing of the effects on the humans imparting it.5 History teaches us that engineers cannot constrain the contexts in which our creations are used. A claim, afterward, that one never dreamed a technology would be applied in that way is not exonerating but an admission of a limited imagination.

How many of our technologies have been designed in the service of or been entrained into the military-industrial complex?

So maybe rooting for Ellie to find his plane and fix it wouldn’t yield a happy ending. Especially considering that the mission he aborted was to bomb Momo’s refugee camp.

“You’re gonna ask what kind of skill set you need to live in a fugee camp,” Momo riffs. “You need a ration card and of course you need some serviceable English to convince the foreign do-gooders who used to run the Camp that you are at least half human. If you are well off you might need to learn how to milk a goat or at least have the ability to tell when a goat doesn’t want to be milked.”

Both men’s voices, and Mutt’s, are consistently engaging. To this American reader, Momo’s voice is persuasive, though Ellie sometimes sounds awfully British, as he remembers washing his coffee cup with “lemon scented Vim” and “making that curry for which I stuck a recipe to the fridge three months ago.”

And yes, Mutt the dog has a voice as well, in chapters interleaved with Momo’s and Ellie’s. Mutt is, like the two men, funny; but he’s wiser than both. “Momo thinks he found me, he adopted me, he trained me … I let him think that.” Mutt is also a kind of Zen monk, prone to the koan, the existential (if sometimes ungrammatical) question. “Is Mutt bone not a bone?” “Momo,” Mutt observes, “has the making of a great preacher. He can accuse and plead in the same sentence.”

The three settings of the novel—the desert, the camp, and the Hangar—are liminal spaces, each a kind of purgatory full of dead, dying, and/or deserted souls. In the desert, Hanif uses the miragelike, hallucinatory quality of images to establish the titular red birds. Mutt is the first to see them: “When someone dies in a raid or a shooting or when someone’s throat is slit, their last drop of blood transforms into a tiny red bird and flies away.” He qualifies in a quintessentially Mutt way: “I might be wrong. But Mutts are rarely wrong about birds.” Set in this bardo, fueled by the way two cultures have misunderstood each other, it’s only natural that Red Birds builds to a climax swirling with hallucinatory misperceptions, including a “swarm gathering” of red birds.6 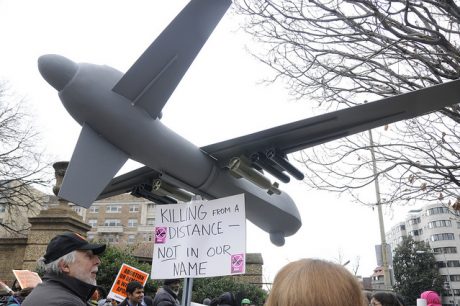 Hanif’s novel closes with an expression of faith—I won’t reveal the pilgrim’s identity—that parallels and inverts Joseph Heller’s “blasphemous” tirade in Catch-22. (“And don’t tell me God works in mysterious ways. … There’s nothing mysterious about it, He’s not working at all. He’s playing. Or else He’s forgotten all about us. That’s the kind of God you people talk about, a country bumpkin, a clumsy, bungling, brainless, conceited, uncouth hayseed.”7) 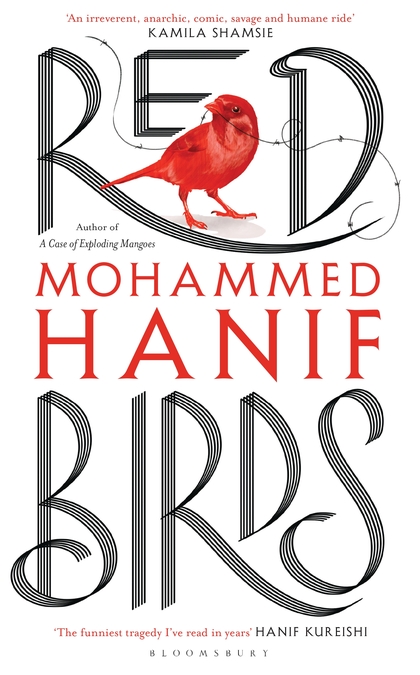