Infra
For centuries, the Congo has compelled and defied the Western imagination. Richard Mosse brings to this subject the use of a discontinued military surveillance technology, a type of color infrared ... 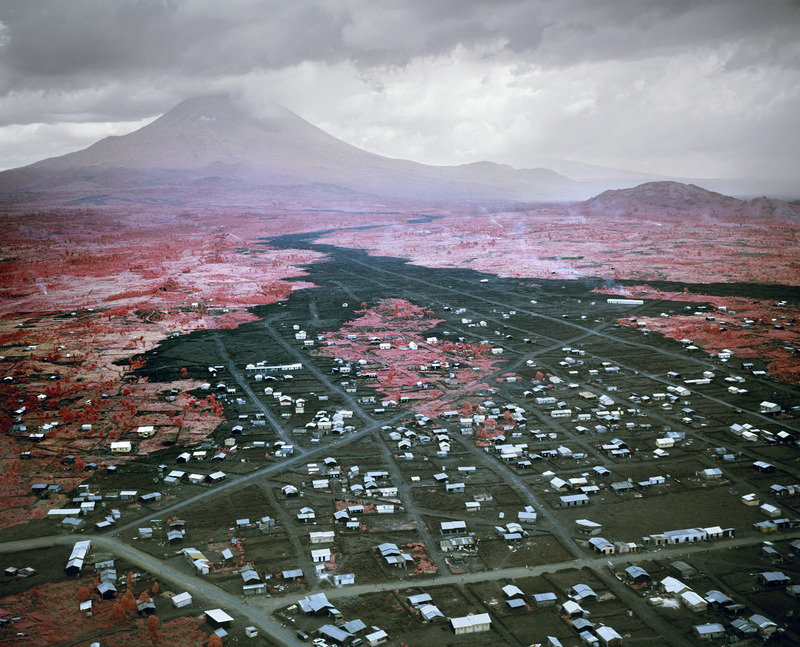 Lava Floe (2010) — Overlooking suburbs of Goma adjacent to Mt. Nyiragongo. The last major volcanic eruption of Nyiragongo, which devastated Goma, was in 2002. 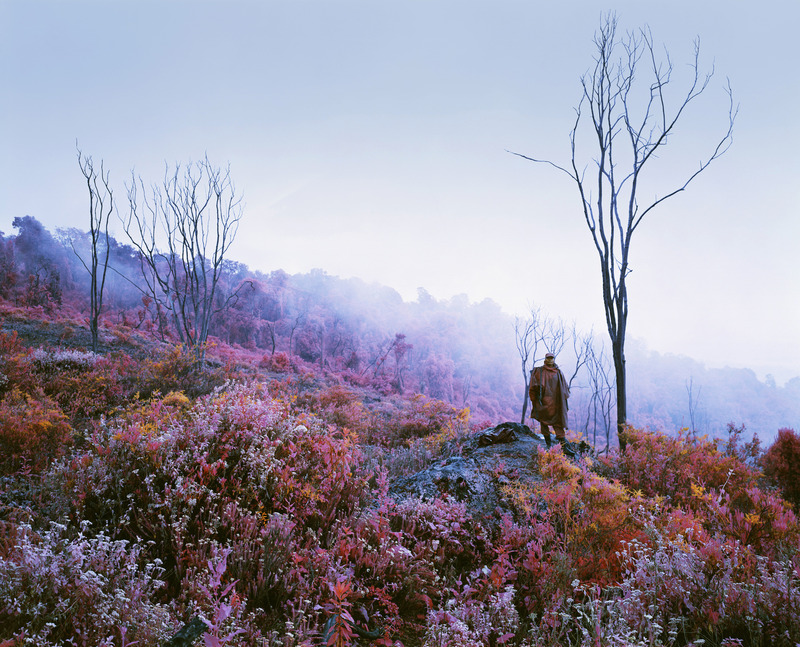 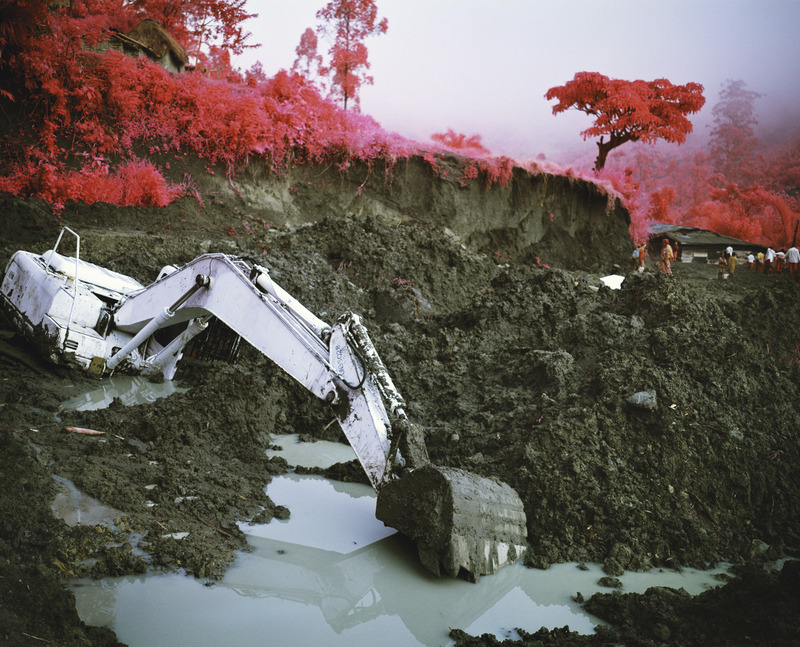 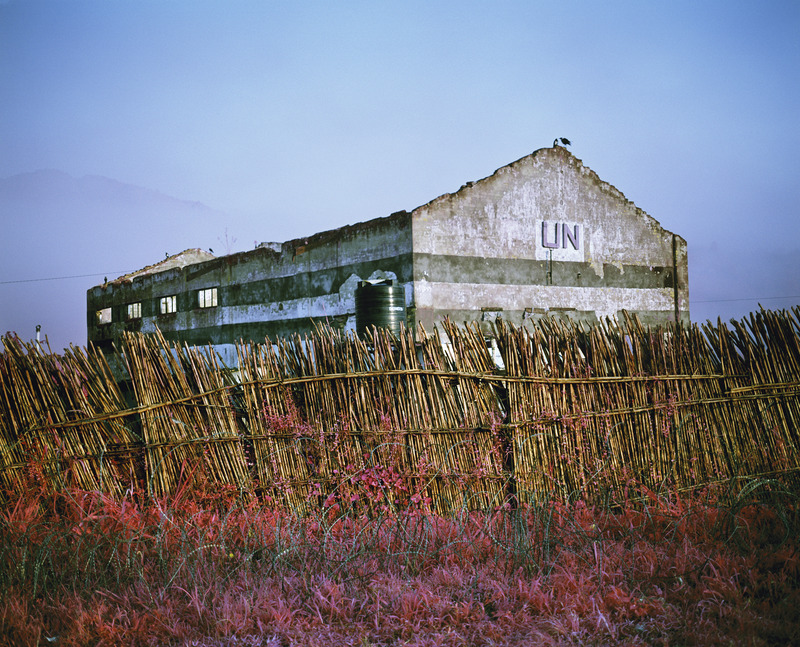 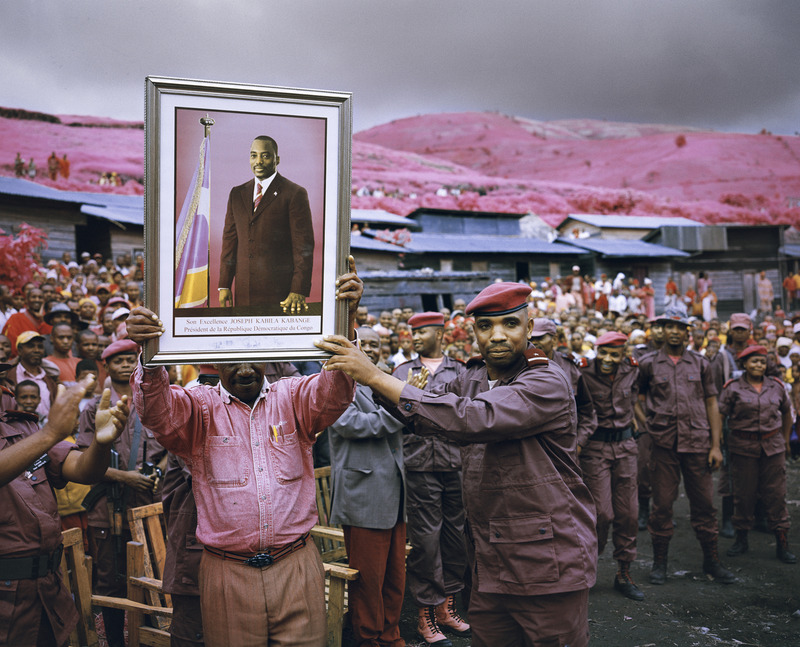 Kabila Kabanga (2010) — Framed poster of Joseph Kabila Kabanga, president of Democratic Republic of Congo, held aloft by FARDC soldiers at Mushaki, Masisi Territory, North Kivu. Lt Col Vianney Kazarama (right) was once in the CNDP paramilitary group, joined the Congolese National Army, FARDC, on the day of this photograph in 2010, but has now defected to join the M23 rebel group in support of General Bosco Ntaganda (aka The Terminator) who is on the run from the International Criminal Court who seek his trial in the Hague for war crimes. 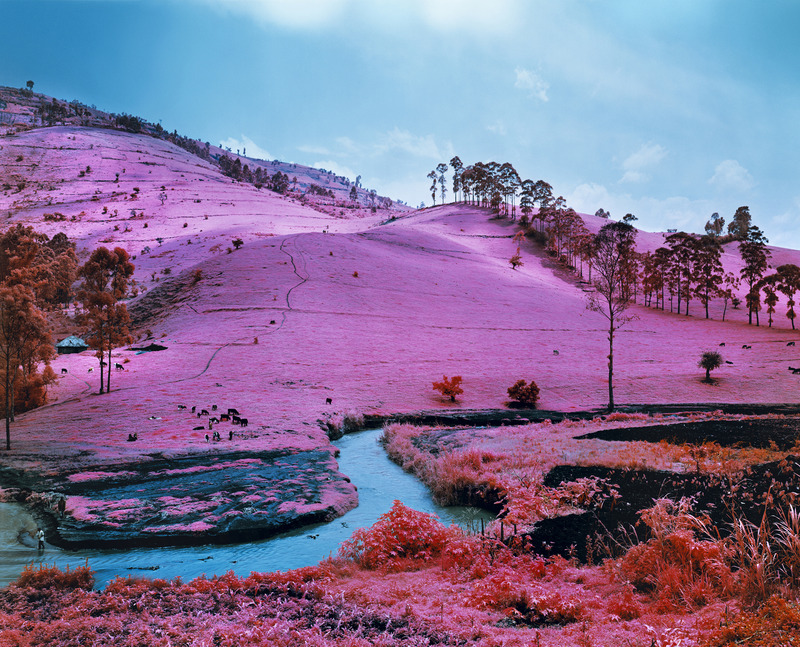 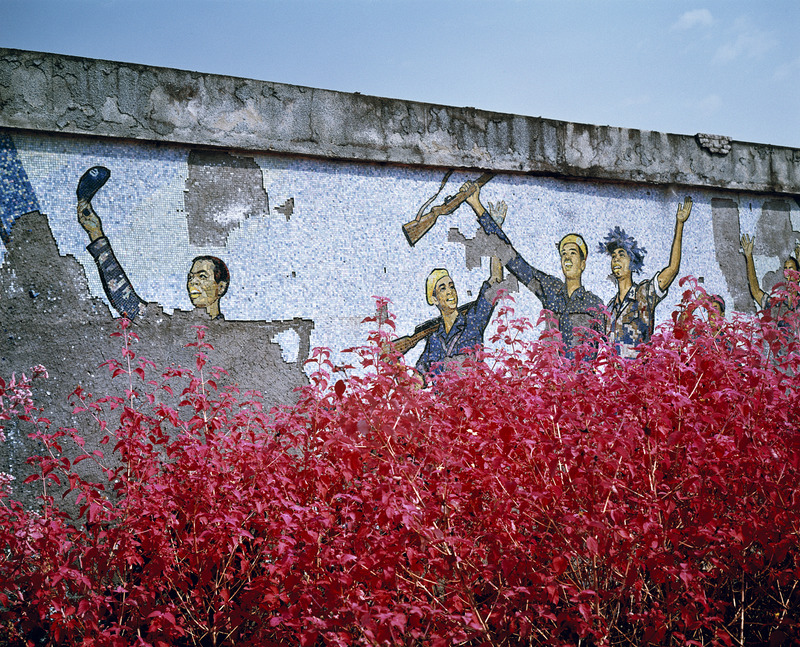 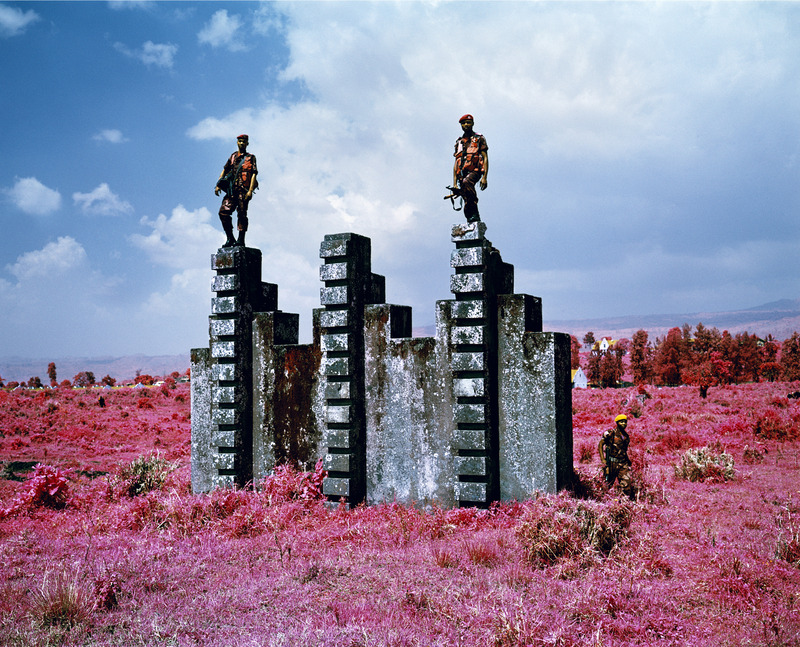 Triumph of the Will (2011) — FARDC soldiers demonstrate the purpose of an old Belgian commando training structure at Rumangabo military base, North Kivu. 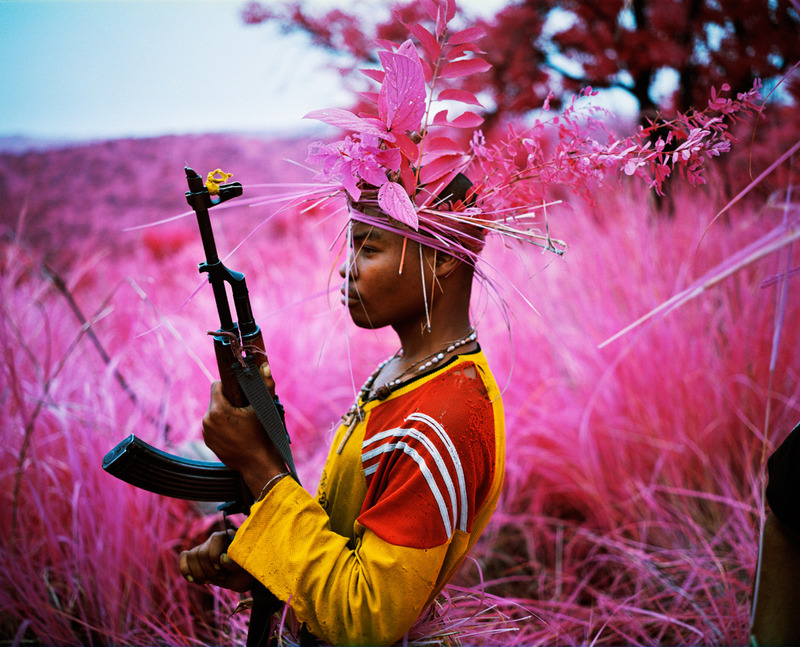 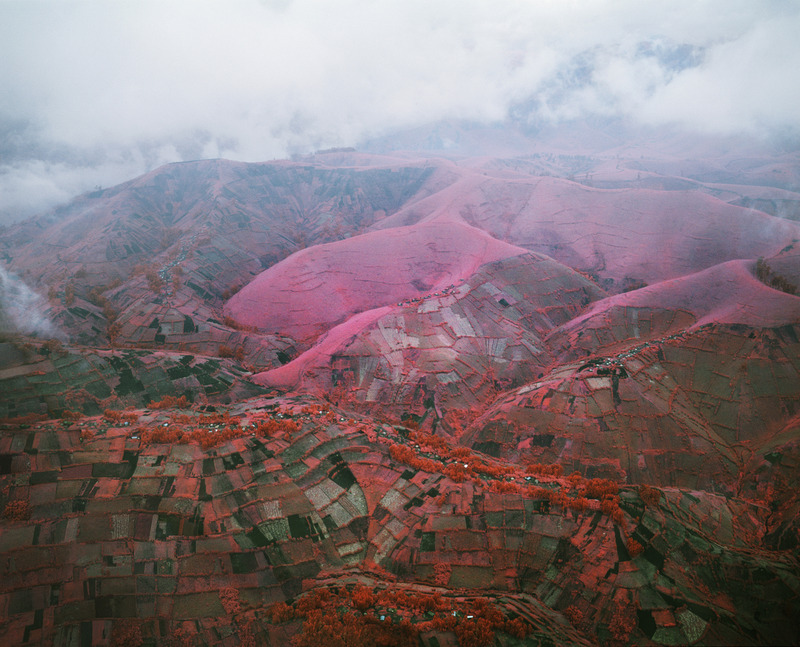 For centuries, the Congo has compelled and defied the Western imagination. Richard Mosse brings to this subject the use of a discontinued military surveillance technology, a type of color infrared film called Kodak Aerochrome. Originally developed for camouflage detection, this aerial reconnaissance film registers an invisible spectrum of infrared light, rendering the green landscape in vivid hues of lavender, crimson, and hot pink.

Infrared film also found civilian uses among cartographers, agronomists, hydrologists, and archaeologists, to reveal subtle changes in the landscape. In the late 1960s, the medium was appropriated in the cover art of albums by rock musicians like Jimi Hendrix or the Grateful Dead, trickling into the popular imagination as the palette of psychedelic (from the Greek for “soul-manifesting”) experience, eventually accumulating a kitsch aesthetic.

On his journeys in eastern Congo, Mosse photographed rebel groups of constantly switching allegiances, fighting nomadically in a jungle war zone plagued by frequent ambushes, massacres, and systematic sexual violence. These tragic narratives urgently need telling but cannot be easily described. Like Joseph Conrad a century before him, Mosse discovered a disorienting and ineffable conflict situation, so trenchantly real that it verges on the abstract, at the limits of description.

In his extraordinary series of essays on Africa, The Shadow of the Sun, Ryszard Kapuscinski reminds us that, “The richness of every European language is a richness in ability to describe its own culture, represent its own world. When it ventures to do the same for another culture, however, it betrays its limitations, underdevelopment, semantic weakness.”

Infra offers a radical rethinking of how to depict a conflict as complex and intractable as that of the ongoing war in the Congo. The results offer a fevered inflation of the traditional reportage document, underlining the tension between art, fiction, and photojournalism. Infra initiates a dialogue with photography that begins as an intoxicating meditation on a broken documentary genre, but ends as a haunting elegy for a vividly beautiful land touched by unspeakable tragedy.

They say
that Napoleon
was colourblind
& blood for him
as green as
grass.
— From Unrecounted by W. G. Sebald

A monograph of Infra, with an essay by Adam Hochschild, is available from Aperture Foundation, co-published by Pulitzer Center on Crisis Reporting.