Keep It Dirty, Durham
This is the latest installment of Public Streets, a biweekly urban observations series curated by Ellis Avery. They call it “Bull City,” though, with the exception of a downtown statue, there are no ...

They call it “Bull City,” though, with the exception of a downtown statue, there are no bulls and there’s no evidence that there ever were. The nickname comes from the old tobacco brand “Bull Durham,” which was named after the bull on the label of Colman’s mustard, supposedly manufactured in Durham, England, but it turns out that its factory is in Norwich. There’s a lot of that in Durham: moments where myth and reality cross the street to avoid an awkward conversation.

Outside of North Carolina, most people know of Durham for two reasons: it is the home of Duke University and it’s the setting for the film Bull Durham. Duke is elite, wealthy, and hidden away in a nearby forest, while Bull Durham is a 1988 baseball-themed sex comedy starring Susan Sarandon, Kevin Costner, and Tim Robbins that depicts Durham as a rundown, backwater southern town of no repute. That’s old Durham, or Dirty Durham, as the t-shirts would have it: Keep it dirty, Durham. And for a long time that was true: the city was factory-strewn and crime-ridden. Yet like much of urban America, Durham, too, has undergone gentrification. Out are many of the ad-hoc crack houses; in is gluten-free pizza. Condos rise from the ashes of industry, calling hipsters to their lofts, but unlike in Brooklyn, Durham’s country biscuits are legitimately down-home. 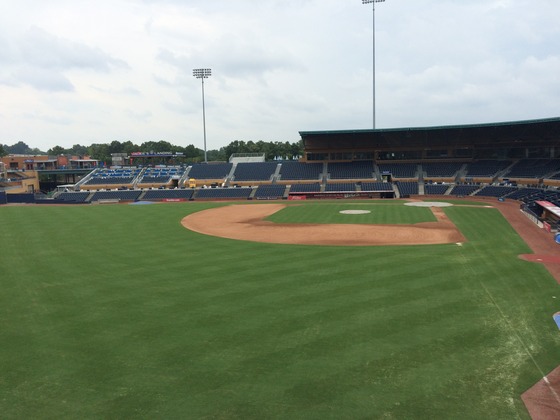 I was thinking of Bull Durham when, during the last homestand of the Bulls’ season, my wife and I found ourselves with tickets. The Bulls no longer reside in the rusting stadium of the film, but instead play in a 20-year-old ballpark built in imitation of Camden Yards, recently refitted with a modern PA system and ever-changing electronic advertisements for multinational beer and a local orthopedics office.

We found our seats along the left field line during the second inning, after the Bulls had already scored twice off the Norfolk Tide. It was 80 degrees with a light breeze, a welcome relief from the sauna of summer. My wife—an olive-hued New Yorker—pointed at the families making their way down the aisles.

“There are so many albino babies here.” To her, all super-blond children are “albino” and remind her of Children of the Corn. Later on, eating custard, she said, “Ooh, I just saw a guy with a JCC (Jewish Community Center) t-shirt on. I’m not alone.”

She’s certainly not, at least not in this part of North Carolina. For the last 20 years, much of the Research Triangle (Raleigh-Durham-Chapel Hill) has seen an influx of out-of-staters, so much so that the nearby bedroom community of Cary is nicknamed “Containment Area for Relocated Yankees.” Yet there wasn’t much sign of this northern invasion at the Bulls game. Here the drawl and cadence of southern vernacular abounded and the mustaches were anything but ironic. Children were paraded on their father’s shoulders, while old friends caught up over tallboys of Coors Light. After one of the Tides singled to right, the woman behind me cried, “Oh mercy.” In the seventh, the crowd cheered for the ground crew, who, near second base, stopped their raking to engage in a choreographed dance to Taylor Swift’s “Shake it Off.” The crowd laughed genuinely, without a hint of condescension. It was fantastic.

But that doesn’t mean the experience didn’t feel somewhat constructed by a Hollywood script. Despite the new stadium, evidence of the film abounded. Between innings, three mascots, each named after one of the film’s characters, raced around the periphery of the ballpark. The man behind me yelled, “Get ‘em, Annie.” Quotes from the film grace gift shop t-shirts. On some nights, the stadium screens film clips to an ecstatic crowd. Crash Davis—Kevin Costner’s character—has had his number retired.

Bull Durham, which told the story of what minor league baseball used to be, now writes the story for what minor league baseball is and will become. It’s an instance where the past informs the present and the present romanticizes the past—something the South is both good at and struggles with. But unlike the violent symbols of the Confederacy making waves across old Dixie, this was a simpler, more purely romantic dream—one where families come together at sunset, hot dogs in hand, to relive the ancient tale of a 40-year old baseball groupie seducing an 18-year old pitcher. Good fun had by all.

After the game, we walked across the street to the American Tobacco Campus, a pedestrian mall built in the shell of a tobacco factory. We strolled hand-in-hand under the Lucky Strike water tower, then along a canal. As we came back around through a crowd of exiting Bulls fans, a man in a tie-dye shirt held on to a screaming flaxen-haired boy of around 5-years of age. It had been a good night. The Bulls had won. The humidity had broken and the beers were cheap. My wife and I—trying our best at southern hospitality—smiled at the man, showing empathy with our eyes. The man stopped and said, “The fuck you looking at?”