Keyword of the Week: NASA
Now that the White House wants to sell the International Space Station to private companies, we asked ourselves just how important outer space and public infrastructure really are. So we looked back ... 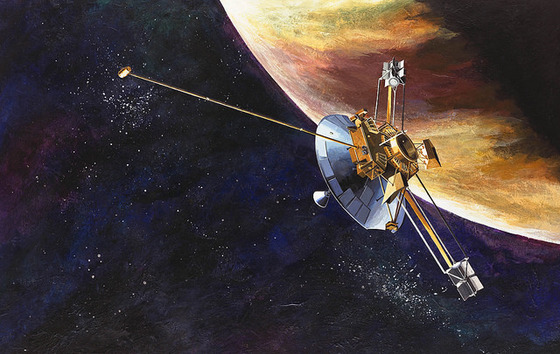 Now that the White House wants to sell the International Space Station to private companies, we asked ourselves just how important outer space and public infrastructure really are. So we looked back to our coverage of NASA, filling our Public Bookshelf with articles on how climate changes can only be solved by a politics for the whole planet, how robots are expanding our knowledge of our solar system and ourselves, how failing infrastructure is a symptom of failing politics, and an interview with visionary sci-fi novelist Kim Stanley Robinson.

In 2000, the atmospheric chemist Paul Crutzen and the ecologist Eugene Stoermer proposed that the earth had entered a new age. The Holocene period, the geological term for the past 11,500 years, had given way to a new epoch—the Anthropocene. A warmer, more extreme, and less predictable pattern of weather had replaced the Holocene’s relatively stable climate. By emitting the greenhouse gases of industrial society, our species has become a geological agent. The Anthropocene names that critical juncture, and unambiguously fingers its human causes. … Keep Reading

Since life on Earth is so hard, the utopian imagination likes to turn to space. Almost as soon as astronomers and their telescopes emptied the heavens of angels, philosophers like Bernard Le Bovier de Fontenelle and spiritualists like Emanuel Swedenborg rushed to imaginatively repopulate the newly familiar planets with allegorical utopias. After the “canals” of Mars were discovered in the 19th century, early science fiction picked up the theme. And when the pioneers of spaceflight began scheming ways to get there, they did so with designs as much social as petrochemical: Konstantin Tsiolkovsky in Russia and Robert Goddard in America both imagined rocketry as a means of propelling humanity into a more perfect, space-borne future. … Keep Reading

In February 2017, California state authorities ordered more than 180,000 residents near Oroville Dam, the tallest in the United States, to evacuate. After months of unprecedented rain and snow, a deluge that followed on the heels of a years-long drought, the dam’s emergency spillway, a bypass route designed to release excess water and prevent overflow, threatened to collapse. … Keep Reading

EARTH FIRST, THEN MARS: AN INTERVIEW WITH KIM STANLEY ROBINSON

No writer has done more to realistically imagine the development of human life on other planets than Kim Stanley Robinson. His landmark science fiction series, the Mars Trilogy (1993–1996), probes the biological, geological, and political ramifications of terraforming our red neighbor into a viable ecosystem. Robinson’s latest novel, Aurora, tells the story of a small group of 26th-century pilgrims who have boldly embarked on a multi-generational voyage to an earthlike moon. Where the Mars books ask whether humans should transform barren rock into a living, breathing world, however, Aurora questions whether humans could. Robinson’s prodigious imagination offers an urgent reminder that, like the colonists of his novel, we are all stuck together on a single starship: Earth. … Keep Reading