Keyword of the Week: Pride
In tough times, LGBT Pride Month never fails to brighten our hearts. So we looked back to our coverage of pride, filling our Public Bookshelf with articles on a queered Choose-Your-Own ... 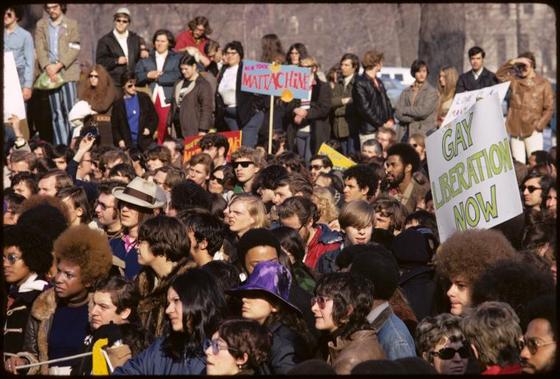 In tough times, LGBT Pride Month never fails to brighten our hearts. So we looked back to our coverage of pride, filling our Public Bookshelf with articles on a queered Choose-Your-Own-Adventure novel, the early gay protests of 1970s New York, the queer anti-normativity of Brontez Purnell, and a sports memoir that unexpectedly helped one reader realize they were gay.

Queer your own adventure

“BEWARE and WARNING!” So heralds the front page of the Choose Your Own Adventure books, wildly popular in the 1980s and 1990s. “This book is different from other books,” the note threatens and promises. “You and YOU ALONE are in charge of what happens in this story.” This premise enthralled me as a young reader. … Keep Reading

Do queers ever grow old? Do their ideas stiffen and their sensibilities melt? Do they fret over finances and retirement accounts, the state of their kitchen plumbing during the winter frost? Do they find themselves on the edge of mosh pits afraid to risk entering lest they be thumped by the wilding crowd? Do they linger past their “use by” dates? Do they lose currency? Do they die ordinary, unimpressive gray deaths? … Keep Reading

Is being gay just about sex? It’s difficult to imagine anyone asking the question today. If the taglines used to market lesbian, gay, bisexual, and transgender Americans to the country’s mainstream—“Love Wins,” “It Gets Better,” and “You Can Play”—have led to unprecedented levels of inclusion and visibility, it is precisely by shoving sex aside and presenting gay people and straight people as essentially the same at heart. In the process, as the outsider status attached to being gay disappears in more and more contexts, some of gay culture’s radical roots risk being expunged from memory. … Keep Reading

The book that made me: Gay

I was a voracious reader of celebrity autobiographies as an adolescent, and sports autobiographies were particularly appealing to me given my own sporty, competitive proclivities. Just around the time I began to feel the faint stirrings of my sexual non-normativity—at the age of 13 in 1986—I cultivated an obsession with tennis, largely because of Martina Navratilova’s dominance in the sport during that era. … Keep Reading