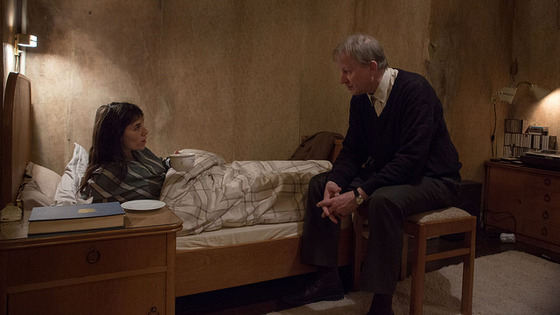 In the New Republic, Eric Sasson centers his review of Lars von Trier’s Nymph()maniac on the belief that “[o]ne can’t make a movie about nymphomania and not have it be about female sexuality.” While this more or less may be true, it is no less true that a movie entitled Nymph()maniac need not be concerned (primarily) with female sexuality. Titles are curious, always paradoxically positioned outside narratives and yet constitutive facets of their structure. They are our entry point to a work and can also serve as marketing tools that get us, in this case, into the theater. But after moving past a title, does it bear much significance? Like an epigraph, it might illuminate the content which follows, or it may just serve as complimentary. What von Trier does is far more cunning. Anticipating his critics’ obsession with sex, he has laid the bait for a lens through which to view his two-part, four-hour long Decameron-esque film. It seems that essentially everyone has fallen for his trap, and I can almost hear him laughing at the resulting proliferation of myopic criticism.

It’s not as if we weren’t already, and arguably always are, talking about sex, but here von Trier has dictated both the discussion’s terms and their inevitable misuse. The narrative, so filled with a gallery of flaccid and erect penises, a society of women whose members chant “Mea Vulva, Mea Maxima Vulva” and a full catalogue of sex acts, does a fine job in making it difficult not to see sex in every corner of the screen; the sheer visual barrage of genitalia gives the impression that this is the film’s only interest and consequently goads us to debate whether what we’re watching is banal or erotic, feminist or misogynist. Regardless of where your views fall on this spectrum, every assertion of opinion still situates the conversation in terms of sex, thus perpetuating the cycle ad infinitum. And I grant that these very sentences make me equally complicit in this endless feedback loop, not least because von Trier has cleverly made certain that any attempt to de-sex Nymph()maniac will fail. But this does not excuse the general close-mindedness that occurs every time a film pushes societal boundaries regarding sex.

To the critics’ credit, this is not another case of Blue is the Warmest Color about which roughly 10 minutes of physical intimacy colored every discussion concerning a three-hour long film; full-frontal nudity and explicit sexual content do indeed abound in Nymph()maniac. Seligman (Stellan Skarsgård) finds Joe (Charlotte Gainsbourg), beaten and bleeding, in an alley, and after she refuses calls to the police or an ambulance, he takes her to his apartment for tea and rest. It isn’t long before Joe begins telling him a story that takes the form of autobiography and which predominantly concerns her (supposed) sexual experiences.

Such linguistic gymnastics are necessary when discussing her speech because it’s not at all certain whether anything she says ever happened. Fellating a married man on a train in order to win a “bag of chocolate sweeties,” a journey through “the country of the big black cocks [and] the country of small yellow cocks,” being struck on multiple occasions with a riding crop…this is a mere sample of what weathered, exhausted Joe relates to the baby-faced and intellectually excitable Seligman as she lays tucked in bed, the staging of which inverts the parent/child bedtime storytelling dynamic. Who can say that this isn’t her way of placating, entertaining, or even lulling to sleep this, in many ways infantile, man who, like the viewer, has a stake in Joe’s story?

Others have noted Nymph()maniac’s focus on storytelling, but they stop short of privileging the act and manner of storytelling itself over its content. Yet von Trier rather blatantly suggests we focus on the former, filling the narrative as he does with self-reflexive commentary on the way Joe crafts her tales. For example, when Seligman expresses his disbelief that Joe’s lover-then-husband, Jerôme (Shia LaBeouf), could return to her life in a clichéd, serendipitous manner, she pointedly asks, “Which way will you get the most out of my story?” Even earlier, the viewer must contemplate the slim odds that two men in Joe’s life eat rugelach with a cake fork. And then there are von Trier’s nods to his other films, most obvious being the near-complete restaging, down to the Händel aria, of Antichrist’s opening trauma. These are not an auteur’s preoccupations cast in new forms (that occurs elsewhere); these are self-conscious moves that make us, especially those familiar with von Trier’s oeuvre, aware of these stories as stories.

While the content of Joe’s narrative, truthful or not, is, by its very presence, open to debate, writers have rarely approached von Trier’s depiction of sex and its function within the film on the film’s own terms; instead, we usually just learn what arouses them. Case in point, The New Yorker’s Richard Brody:

…von Trier’s depiction of sex acts is blandly pneumatic, mechanical, virtually effortless, and filmed as casually and as indifferently as is the rest of the action. There’s no metaphysic, no mystery, no intricacy, no thrill to his sense of sex. The very notion of pleasure itself is one that escapes him.

Von Trier continually tries to turn our attention away from thrusting bodies, be it through visual or narrative techniques. There are the Fibonacci numbers (“3+5”) that he overlays on top of Joe and Jerôme in their first sexual encounter; Seligman teaches Joe about polyphony, leading her to tell a story about three lovers which von Trier crafts as a triptych, complete with an homage to Edward Muybridge, that makes focusing on any one segment difficult; and let’s not forget how damned excited Seligman gets not from hearing the details of Joe’s sexual conquest on the train but rather how similar the event may be to fly fishing! Time and again, von Trier gives us an excuse not to see sex, but critics like Brody refuse to shift their gaze.

What von Trier has created is a bit of a Rorschach test, a constant dangling of signifiers begging for signifieds that may, but not must, be sexual. Almost all the characters’ names are single letters—B, S, A, K—which evoke both psychoanalytic case studies and a certain randomness in the construction of these stories, as if everyone and everything in them could just as easily be shuffled around, with B playing the role of S and K’s personality ascribed to A. After all, it’s not accidental that the film begins and ends with a black screen filled with sounds, a move which denies us not just comfortable signification but any signifier/signified connections and makes foolish all declarations of concrete truth or knowledge.

And so we’re back to that pesky title: Nymph()maniac. The vaginal pun is obvious, but the parentheses also signal an open and unclosable space for interpretation, a space ignored by every critic who refers to the film as Nymphomaniac. Not only is this physically lazy (how hard is it to type “()”?) it is critically so, in that it brands the film as being solely about nymphomania (it’s not) and carte blanche accepts Joe’s declaration in one of her stories that she is a proud nymphomaniac. Von Trier makes certain that we will never know Joe. Seligman, the film’s stand-in for the critic, ultimately accepts Joe’s stories as incontrovertibly true, and the consequences are fatal. Why the rest of us don’t heed this warning and instead relish the film’s provocative and playful ambiguities is beyond me.