Let’s All Inhale: Pynchon Goes to the Movies
In a recent interview with Rolling Stone, Paul Thomas Anderson makes a revealing comment about his artistic choices as a director: “If you can convince yourself that there’s some link to reality ... 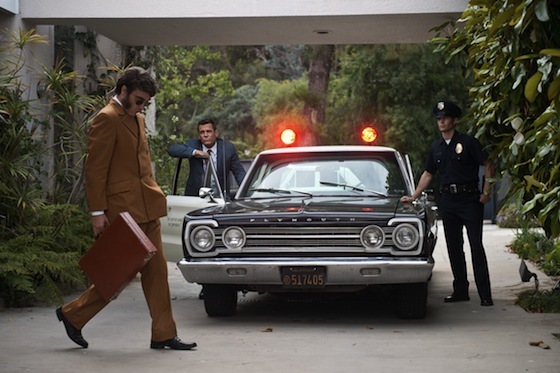 In a recent interview with Rolling Stone, Paul Thomas Anderson makes a revealing comment about his artistic choices as a director: “If you can convince yourself that there’s some link to reality, then you can justify anything.”1 He’s talking about the famous “milkshake” line from There Will Be Blood (2007), but he might just as well be explaining how he managed to turn the paranoid universe of a Thomas Pynchon novel into his most recent masterpiece, Inherent Vice. Pynchon’s fiction can be so hallucinatory and bizarre—with flat characters, self-amused allusions, silly songs—as to seem a world unto itself. Anderson’s adaptation, however, anchors Pynchon’s prose and characters in stunning cinematography and even more powerful performances. For all its mayhem, this existential stoner romp set among the hippies, outcasts, and dreamers of 1970’s Southern California smolders with a pungent critique of power and its perversions in an age, like our own, that cannot rid itself of masters.

As with most of Pynchon’s novels, the plot of Inherent Vice is a species of shaggy dog story, one that opens quietly among the dingy bungalows of fictional Gordita Beach, Los Angeles. Stoner Private Investigator Larry “Doc” Sportello (Joaquin Phoenix) is inhaling the night away when his sinuous “ex–old lady” Shasta Fay Hepworth (Katherine Waterston) suddenly shows up asking for help. She has been approached to join a plot to rob her lover, the Jewish real-estate mogul and aspiring Nazi Mickey Wolfmann, and commit him to an insane asylum. In a related lead, another client drops in on Doc for help in finding an Aryan Brotherhood biker who happens to work for—you guessed it—Mickey Wolfmann.

As the names start echoing ominously, a single word scribbled by Doc says it all: “PARANOIA.” Soon he wakes up next to the fresh corpse of that same sought-after neo-Nazi, surrounded by LAPD grunts led by detective and part-time actor Christian “Bigfoot” Bjornsen (an outstanding Josh Brolin), a brutal officer with “that little shit twinkle in his eyes that says ‘civil rights violations.’” After Shasta and Wolfmann disappear, Doc chases a convoluted trail that leads into a glorious mash-up of noir and stoner-film clichés, with homages to everything from Up in Smoke (1978, dir. Lou Adler) to Robert Altman’s The Long Goodbye (1973) to the short-lived Leslie Nielsen TV comedy Police Squad (1982).

With a joint ever in hand, Doc stumbles through one loosely connected mystery after another: he investigates the fake death of smack-addicted saxophonist Coy Harlingen (Owen Wilson), who is now infiltrating counterculture groups as an informant for the LAPD; whispers in foggy alleys with an Asian masseuse named Jade (Hong Chau); wanders into the lethargic house party of a rock band called “Spotted Dick”; and makes the acquaintance of a perverted dentist, Dr. Rudy Blatnoyd (in a riotous tour de force by Martin Short). Along the way, there’s a mysterious heroin importer known as the Golden Fang, which is also the name of Blatnoyd’s dental syndicate offering services to smackheads. Lurking even deeper in the shadows is a powerful cohort of interests that aren’t above hiring assassins to protect their power, all of whom Doc encounters in due course.

The plot hangs together if followed closely, but keeping the details straight is not Anderson’s (nor has it ever been Pynchon’s) priority. As with most mysteries, the whodunit in Inherent Vice is secondary to the social tableau that the investigation unearths, allowing us to delve into some of the kinkier zones of the body politic. In this instance, the world that Doc discovers is an obscene mirror of our own, a parallel reality of absurd bureaucrats, cops, and lawyers who maintain a vertically integrated criminal syndicate that controls and distorts human desires. As the narrator, an astrologist friend of Doc’s named Sortilège (played by indie singer Joanna Newsom), intones in a passage drawn straight from the book: “As long as American life was something to be escaped from, the cartel could always be sure of a bottomless pool of new customers.”

The world that Doc discovers is an obscene mirror of our own.

With its emphasis on power and desire, Inherent Vice makes perfect sense as a follow-up to The Master (2012), Anderson’s previous film about rootless loners desperate for meaning and purpose. There, the manipulative cult leader Lancaster Dodd (Philip Seymour Hoffman) lays out the following problem to his acolyte Freddie (another astonishing turn by Joaquin Phoenix): “If you figure a way to live without serving a master, any master, then let the rest of us know, will you? For you’d be the first person in the history of the world.” Inherent Vice reframes this problem through the desperate questing of subculture wanderers who seek to master others—or to be mastered.

These quirky, wounded characters are as richly drawn as any in Anderson’s films, with an emotional current that churns through persistent close-ups. We linger on the manic spark in Martin Short’s coked-out eyes, or on Josh Brolin’s explosive rage in an unforgettable scene that involves him devouring a good ounce of raw marijuana. Here and elsewhere, Anderson finds images that hold up against the poetry of Pynchon’s prose—the quizzical creases in Phoenix’s mutton-chopped cheeks, for example, or the vulnerable hope in the face of a young mother and recovering heroin addict (Jena Malone). Meanwhile, Pynchon’s characteristic musical numbers are replaced by Jonny Greenwood’s edgy score and by inspired musical picks such as Can’s “Vitamin C,” with its catchy howl: “Hey you, you’re losing, you’re losing, you’re losing, you’re losing your Vitamin C.”

The title, we eventually learn, comes from insurance law. “Inherent vice” refers to loss that results from some intrinsic property in an object that might cause it to damage itself. It’s a secular version of original sin that plagues postwar American romantics like Doc, Shasta, Bjornsen, the whole Pynchon crew. Its hilarious scenes and ludic charm notwithstanding, then, the film’s tone is elegiac. Anderson does a good job working in the ironic mysticism that underpins Pynchon’s paranoia, as when Sortilège narrates Doc’s thoughts: “Was it possible, that at every gathering—concert, peace rally, love-in, be-in, and freak-in, here, up north, back East, wherever—those dark crews had been busy all along, reclaiming the music, the resistance to power, the sexual desire from epic to everyday, all they could sweep up, for the ancient forces of greed and fear?” “Gee,” Doc decides, “I dunno …”

Doc’s fear—which is also a kind of hope, that someone somewhere is taking an interest in our doings—is that these unseen powers of evil will crush all difference, neutralize all energy. The obverse fear, which may be more terrifying, is that there is no They in control at all. By its own inherent vice, the paranoid fantasy can become as comforting as any religious dogma, another tool for mastery. And so, against the Golden Fang’s evil machine to ensnare desire and quash dissent, Doc settles for a bruised maturity that holds on to the renewable resources of kindness and love. Rather like the Big Lebowski before him, Doc is something of a prophet, with reserves of empathy even for the vicious Bigfoot. “I’m not your brother,” Bigfoot spits at Doc late in the film—to which our stoned hero generously replies, to a man in evident pain, “But you could use a keeper.”

Directed by Paul Thomas Anderson; based on the novel by Thomas Pynchon
2014