Linklater’s Gooey Realism
Richard Linklater’s acclaimed Boyhood is an ambitious film about a Texas boy named Mason, a millennial everyman played by Ellar Coltrane, as he matures from ages 6 to 18. Along the way, he proceeds ... 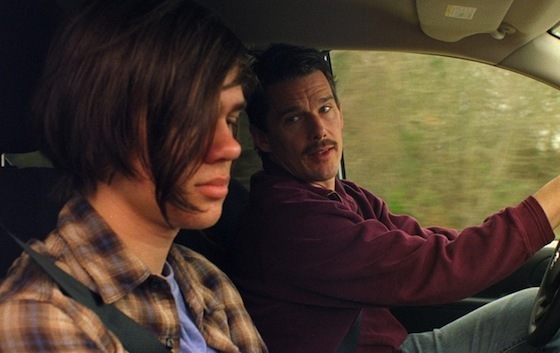 Richard Linklater’s acclaimed Boyhood is an ambitious film about a Texas boy named Mason, a millennial everyman played by Ellar Coltrane, as he matures from ages 6 to 18. Along the way, he proceeds through the more or less familiar milestones of middle-class life, including, among others, recognition of a disenchanted universe (magic is a persistent motif); discovery of his parents’ failings; his first kiss; peer pressure and bullying; confrontation with alcoholic step-fathers; sex; blossoming vocation (in this case, photography); graduation from high school; and a psychedelics-enhanced hiking trip on day one of college. Mason’s sister, Samantha (played by Lorelei Linklater), grows up alongside him, as do his divorced single mother, Olivia (Patricia Arquette), his wandering father, Mason Sr. (Ethan Hawke), as well as some secondary characters who reappear at intervals.

Throughout, the most arresting aspect of the film is that the actors age before our eyes. Filmed over 12 years, the cast was reassembled every year or so to shoot a few scenes, allowing Linklater to track life nearly in real time. The process yields excellent performances by Hawke and by Arquette, who confront adulthood with as much bewilderment as the young Mason does as he tries to understand his parents’ incessant fighting. Time is the film’s main character, and the opportunity to glimpse 12 years of a family’s life in less than three hours allows viewers to confront (or fondly remember) their own beautiful and painful experiences along time’s arrow.

But the lives that are rendered most vividly in the film are not those of the children at all, and certainly not the boy of the title. The film is markedly better when the adults do the talking, creating a strong sense of unevenness as we shift between engaging grown-ups and flat adolescents who cannot match the adult actors’ range. As a result, much of the film has a certain drabness, a generic quality that is echoed in the film’s title, Boyhood, as though it were a definitive, or at least representative, account of male maturation.

Mason is an ordinary boy, of course, but his ordinariness is not the issue. Whether through a bad script or poor acting, Mason/Coltrane does not convey much in the way of personhood: he digests experience with the same neutral gaze and mumbles phrases in the same passive tone from the age of nine on. Chemistry between the characters often seems strained (between Mason and his various love interests, in particular), and some plot points are almost comically forced, none more so than when Olivia tells a young Hispanic laborer (Roland Ruiz) that he’s smart enough to go to community college, and then, years later, the same man reappears by chance to thank her for setting him on a path of upward mobility that has helped him to become a restaurant manager.

The flatness of the film’s hero, meanwhile, means that we do not so much contemplate Mason’s psychological development as we watch him experience cultural products from the 2000s. Harry Potter, Nintendo Gameboy, the Twilight
series, Will Ferrell’s baby landlady sketch on Funny or Die—this is the content of Mason’s formative years. We watch him enjoy cartoons, books, music, Internet memes, just as he eventually learns to discuss culture with an insider’s knowingness. For each stage in Mason’s development there is an associated cultural product, and his personality, his interiority, is ever secondary to his consumption.

And perhaps this emphasis on culture over consciousness is the point, especially if Linklater’s goal is to show the various social ties that condition boys today (Pavlovian conditioning is another persistent motif). Indeed, while remaining firmly in control of the narrative, Linklater seems to suppress specificity of character in favor of a more abstract presentation of familiar experiences and familiar social roles. So while presumably he has some inner life, Mason’s subjectivity remains tangential to the functions of “son,” “brother,” “boyfriend,” or “student” that he periodically fulfills. What Mason believes, thinks, hopes, or feels remain mostly extraneous, encouraging us to adopt a more sociological perspective on the world that the film represents.

When the film’s commitment to an unfiltered representation of life rubs up against tendentious plotting, Linklater’s realism veers into wishful thinking.

Viewed from this angle, Boyhood almost comes across as satire in its representation of bourgeois life as a series of predictable stages and acts of consumption along a factory line of development. Mason’s next 18 years seem as eerily predictable as his first: college angst, graduation, a year abroad taking photos, an MFA, his first art show, flight from the art world after finding it to be as shallow as any other marketplace, a career in graphic design because it’s a living, and marriage. Another 18 and he’ll wind up a discontented VP with grown kids of his own, finding solace only in his hobbies. (This, by the way, is similar to the course charted by Mason Sr., who sets aside his dream of becoming a musician and instead winds up a responsible, Christian Family Man with a new wife and child.) The film holds out few alternatives and certainly no consoling reflections on the pleasures of family, just as there is no robust soul roaring against mediocrity. Boyhood offers little consolation for a disenchanted modernity.

This is the gist of the film’s emotional climax, when Olivia breaks down in tears in anticipation of her son’s departure for college. “I just thought there would be more,” she sobs, which is another way of saying that she has fulfilled her function as mother to this boy and discovered no goal, no knowledge, no special experience attained. Linklater’s willingness to plumb the depths of middle-class despair lends the film a gritty aura of reality familiar from, say, the hysterical honesty of Jesse and Céline in Linklater’s more successful Before series (1995, 2004, 2013).

But just when irony threatens to rear its head, and after dealing such a shattering coup de grâce, the film arrives at a highly contrived conclusion with Mason’s first day at college. Only minutes after arriving at his dorm, he goes off with his new roommate, the roommate’s girlfriend, and another girl to hike in the desert and experience nature with psychedelic (read: magical) mushrooms. In the end, Mason seems to free his mind—the rest, his lingering gaze on the horizon suggests, will follow.

When Boyhood’s commitment to an unfiltered representation of life—an objective perspective that in another movie might more effectively justify the world of surfaces on offer—rubs up against such tendentious plotting, Linklater’s realism veers into wishful thinking. Instead of being intellectually or emotionally evocative, it becomes gooey and unconvincing.

Boyhood, then, is not a particularly good movie, nor does it yield much in the way of insight into its stated theme or the American milieu that it depicts. As a monument to realism (if not an exemplar) and as a logistical feat, the project is remarkable. As a piece of cinema, it is more gimmick than art. What emerges most starkly from this representative account of a boy’s life is the sentimental hand of the director, poised above his creation.

Written and directed by Richard Linklater
Distributed by IFC Films, 2014