Little Big-Time Garage
This is the latest installment of Public Streets, a biweekly urban observations series curated by Ellis Avery. Virginia. Downtown Charlottesville. A man in a white suit walks down First Street ... 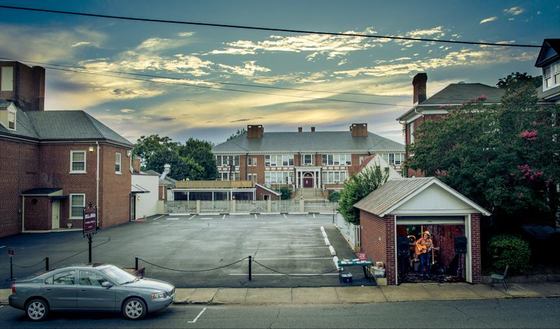 Virginia. Downtown Charlottesville. A man in a white suit walks down First Street, heading toward the pedestrian mall. Behind him, a woman pushes a baby carriage along the narrow sidewalk. The woman’s dress is the color of sand. She steps carefully, unsteady in her heels. Her hushed voice rises as she asks a question. The man answers, “We’re almost there.”

The evening air is humid and warm. It’s summertime, and down on the mall, shops are closing, happy hours are ending, and diners are waiting for patio tables. Off the mall, up First Street, in an alley that runs between a restaurant and a homeless shelter, a sunburned man with a beard unloads pies from the back of a pickup truck. Up the hill, on Market Street, drivers stop, and people cross. In the park, the sun is low. The trees seem to hold yellow light. A crowd is gathering. People are taking seats on the ledge along First Street or further back in the grass. “Ants,” a young woman says and flicks at her bare legs.

Across First Street, between a funeral home and a church, stands a tiny brick building: a single, one-car garage. The door is raised. Inside, among microphones, amplifiers, a drum set, a teenage boy plugs in a guitar, shakes his hair out of his face, and begins a song he says he wrote about the stars. Dog walkers stop to listen. Children climb on the ledge, holding their parents’ hands. In the grass, a gray-haired man takes off his shirt and leans back for the last bit of sun. College girls lounge on blankets and eat roe-specked sushi from Styrofoam take-out containers. A man with a broad smiling face sits on a bench, takes out a pair of drumsticks, and taps out the rhythm against his thighs. Behind a tree, a homeless couple sleeps, wrapped in each other’s arms. Three young boys in soccer uniforms drop down onto the grass. The boys’ faces are painted with American flags. They listen to the teenager sing, The stars. Oh, the stars. 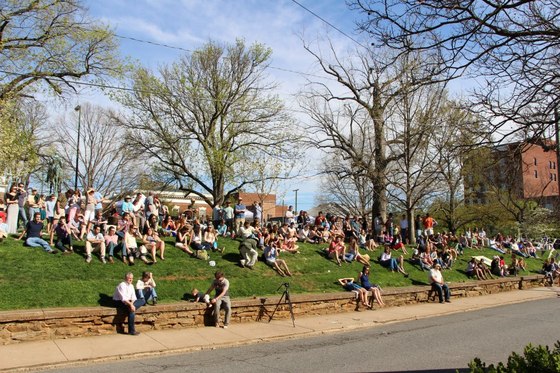 Cars turn down First Street and drift past, or speed up between the park and the garage. One driver stops and rolls down his windows. He listens, then continues on. The teenager invites the man with the drumsticks to join him in the garage for one last song. The rhythm picks up. The teenager plays louder. A child on the ledge starts dancing. The soccer players drink from their sports bottles. They drink fast, and laugh, then entertain each other by drinking shots of air. Someone hands a jar through the park. People search their pockets for dollars and change. The song ends. The crowd claps. The drummer crosses back into the park as the teenager packs up his guitar.

The college girls walk off. The dog walkers loop back. Diners wander up from the mall. The sun has set. Lights switch on inside the garage. From the park, a man shouts a welcome to Rebecca Rego and the Trainmen. The crowd settles as the band takes to the garage. The Trainmen play beneath the lights: stand-up bass, banjo, and mandolin. Rebecca Rego plays guitar. She stands beyond the threshold, her face in shadows, close to the audience in the dusk. She sings, I think I’ll go to Vegas. I want to get famous. That’s what it’s all about. The fireflies are out. Bats and sparrows sweep across the darkening sky.