Lotte Eisner Needs to Fly
Early in Werner Herzog’s 2006 film Rescue Dawn, German-born American fighter pilot Dieter Dengler (played by Christian Bale), shot down and held captive by the Vietcong, is given the choice to put ... 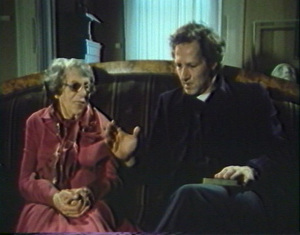 Early in Werner Herzog’s 2006 film Rescue Dawn, German-born American fighter pilot Dieter Dengler (played by Christian Bale), shot down and held captive by the Vietcong, is given the choice to put his signature to a statement denouncing the war and the “corrupt American political establishment” in exchange for an early release. Dengler refuses, telling his captor, “I love America. America gave me wings.” The moment sets the plot in motion, as Dengler is then forced into the ordeal of a Vietnamese prison camp and must improvise some means of escape.

Something of a mirror-image scene occurs at the end of Herzog’s Of Walking in Ice, the director’s diary of his 1974 walk from Munich to Paris to visit film critic, archivist, and personal mentor Lotte Eisner, who had become suddenly and dangerously ill some weeks before.1 Having recuperated in her apartment after his physically draining journey, Herzog notes that “something mellow flowed through my deadly tired body. I said to her, open the window, from these last days onward I can fly.” An even clearer echo occurs in another part of the book, where Herzog expresses his gratitude to Eisner for her early support of the New German film movement (which included, along with himself, Wim Wenders, Rainer Werner Fassbinder, Margarethe von Trotta, and others) by telling her that she “gave us wings, I mean that quite literally.”

That Herzog has spelled out his notions of freedom, agency, and mastery in such dependable terms over the course of his career lends some heft to his choice to forgo air travel in this case (which, as he points out near the beginning of the book, would have gotten him to Paris in 90 minutes rather than the three weeks it took him). By his own explanation, he hoped that walking the nearly five-hundred-mile distance would effect some sort of cosmic alchemy that would keep Eisner’s health from deteriorating any further. “German cinema could not do without her now, we would not permit her death … I set off on the most direct route to Paris, in full faith, believing that she would stay alive if I came on foot.” It is as though only a temporary return to the state he was in before receiving Eisner’s gift of flight—in the practice, indeed, of the most extreme anti-aviatic activity possible—could be a sufficient demonstration of his gratitude to and love for his mentor.

Perhaps ironically, Herzog takes obsessive notice of any avian life he encounters during his journey. Sometimes these sightings are fodder for commentary on his own situation, as when he takes refuge from a storm in a small town: “When I looked out the window, a raven was sitting with his head bowed in the rain and didn’t move. Much later he was still sitting there, motionless and freezing and lonely and still wrapped in his raven’s thoughts. A brotherly feeling flashed through me and loneliness filled my breast.” More often the birds in this story appear simply as details in the long, almost logorrheic descriptions of the bleak natural landscape that he must traverse: “Flat countryside, only the crows, shrieking all around me—I suddenly ask myself seriously whether I’ve lost my mind, as I hear so many crows but see so few,” to pick just one example from many.

These descriptions take up the vast bulk of the book’s pages, and Herzog returns to the same kinds of details again and again, mixing together different combinations of not only birds but also dung heaps, trash, steam, discarded scraps of paper, mist, empty fields, snow, and abandoned machinery as he travels west. The effect, whether shaped in the editorial process after the fact or reflecting his spontaneous impressions (he claims in a short preface that nothing other than “a few private remarks have been omitted”), is to render the natural world as an unchanging and indifferent, unpleasant and even dangerous landscape. Beginning his trip in late November, Herzog finds himself enduring an unseasonably bitter winter chill and violent precipitation, and spends much of the book pathetically wet and cold.

In his own recently published memoir of guerrilla cross-continental travel, John Waters repeatedly complains about the marked unwillingness of straight men to make conversation or even eye contact with strangers on the road.2 The charge certainly fits Herzog here, who seems to have kept human interaction to a minimum. The only instance of reported dialogue that I can recall from the entire book recreates a testy exchange between our protagonist and a photo-mat operator who insists on closing up shop at precisely five o’clock, unsympathetic to the fact that Herzog has been waiting in line for half an hour. Even here, spoken language eventually breaks down: “Both of us made the ghastliest gestures to show what we thought of each other, and parted company.” Aside from Eisner, people are usually glimpsed from a distance, either spatial (Herzog relates several instances of spying on people from across barren fields) or personal (he watches from the corner table of an inn or tavern, before which the inhabitants of some small German town parade themselves). The closest relationship he has on the road seems to be with his compass; when it goes missing, he experiences “a painful loss.” He is able to replace it in the next town, but abandonment has made him wary of getting too close too soon. “The [new] compass is hydraulic, but it doesn’t have my friendship yet.”

Ultimately, other people are as much a phenomenon of the vaguely threatening natural world as the trees, fields, and birds; it is not uncommon for these walk-on parts to be accompanied by some grossly physical stage direction: “The waitress is eating right now; here she comes, chewing.” Herzog is at least fair-minded enough to see this animality in himself as well; starting out on the second day of his trip, he mentions that “with every movement wary like an animal, I think I possess the thoughts of animals as well.”

All of this is very much in keeping with Herzog’s films, fictional and otherwise, in which the chaos of nature threatens to overwhelm a protagonist who is driven, sometimes for very obscure reasons, to fight against it. As this is a persistent theme of his work, it should not be surprising to find it in full bloom here. It is unfortunate, however, that the story of Herzog’s determination to test himself against the elements crowds out the very person for whom he’s supposedly making the effort. Apart from at the very beginning and very end of the story, he barely mentions Eisner in the main text of Of Walking in Ice, limiting himself to a few passing worries about whether or not her health has deteriorated in the meantime; nowhere in the main text is anything explicitly said about their relationship or her influence on his work.

Eisner’s archival work and writing was a decisive factor in keeping alive a tradition of German filmmaking that predated the Third Reich.

This is a shame, as Eisner should be better known than she is among cinephiles in the United States. Born in Berlin in 1896 and trained as an art historian, Eisner was an important early film reviewer and journalist of the Weimar era. Eventually fleeing Germany in 1933, she settled in France, where, after the conclusion of the war, she worked as an archivist at the celebrated Cinémathèque Française in Paris. But her lasting contribution is her scholarship, particularly her book on German Expressionism in Weimar cinema, The Haunted Screen, and her monographs on Fritz Lang and F. W. Murnau.3 While all of these have been superseded by later treatments of their respective subjects, they remain important early surveys, and were instrumental in the education of Herzog and his contemporaries. In this regard, she can be fairly compared to her boss at the Cinémathèque, Henri Langlois, whose work as a film programmer and curator has been credited as a catalyst of the French New Wave. Langlois, however, enjoys a prominence that has so far eluded Eisner, and unfairly so. She died in 1983, nearly a decade after Herzog’s big walk.

As if to compensate for her absence in the main text of Of Walking in Ice, the University of Minnesota Press has, for this new edition, included as an appendix the text of a speech Herzog gave in 1982 in honor of Eisner’s receipt of the inaugural Helmut Käutner Prize for her work in German film criticism. This is useful not only as a good account in English of her life and work (her posthumously published memoir, Ich hatte einst ein schönes Vaterland [Once I had a beautiful fatherland], has never appeared in an English-language edition as far as I know), but also demonstrates her particular importance to Herzog. Since, as he puts it in his speech, “the continuity in German film was torn asunder by the catastrophe of the Second World War,” Eisner’s archival work and writing was a decisive factor in keeping alive a tradition of German filmmaking that predated the Third Reich and furnished a useful past for the directors who would constitute the New German Cinema. Forgetting his flight metaphor for a moment, Herzog thanks her for erecting “a bridge to our historical and cultural context.” In addition to providing essential artistic inspiration for these new filmmakers, Eisner gave them support, encouragement, and, most importantly for Herzog, legitimacy. This was obviously of great consequence to him both personally and professionally, but it was also an important moment for the revival of German cinema as a whole, which had in the eyes of most critics fallen into insignificance after the war.

Given these accomplishments, then, it’s too bad that Eisner’s part in the book comes as, almost literally, an afterthought. Of Walking in Ice is Herzog’s book and narrates his story, and it isn’t quite fair to criticize it for not attempting anything beyond that. Nor would this be the first time Eisner was overshadowed by the happy results of her contributions; Herzog himself, writing in the introduction to Ich hatte einst ein schönes Vaterland (which, incidentally, recycles some of the material of his 1982 speech), points out that, behind the “spiritual riches” of her legacy, “it seems that her dainty person disappears. One doesn’t think of our Eisner as an individual with a personality, with a particular fate, because her work stands in the foreground.”4 The merits of Of Walking in Ice are considerable, but one perhaps wishes that Herzog, rather than only temporarily shedding his own wings, had also helped Eisner to fly into the foreground herself.

Featured image: Mentor and mentee in Portrait Werner Herzog, an autobiographical short film made in 1986