MAGA: Margaret Atwood’s Gilead Again
Margaret Atwood has argued that there is “within each utopia, a concealed dystopia; within each dystopia, a hidden utopia, if only in the form of the world as it ... 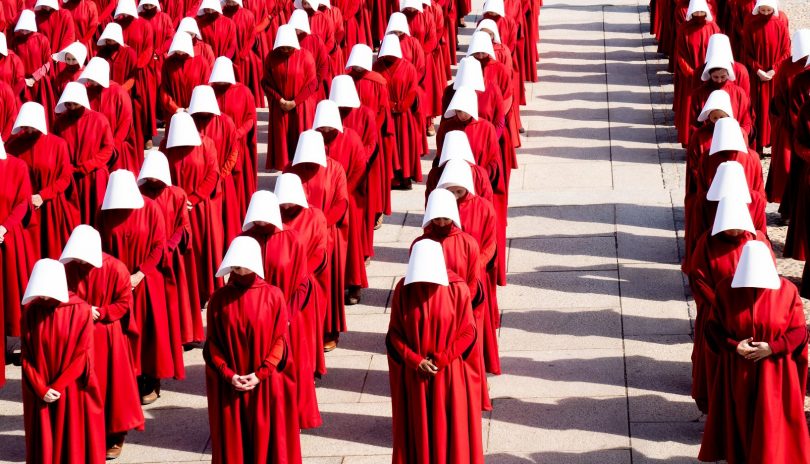 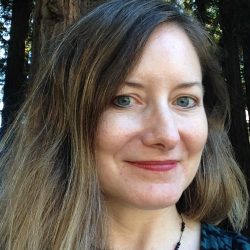 Margaret Atwood has argued that there is “within each utopia, a concealed dystopia; within each dystopia, a hidden utopia, if only in the form of the world as it existed before the bad guys took over.”1 An illustration of this belief can now be found on the cover of Atwood’s The Testaments, the much-anticipated sequel to The Handmaid’s Tale. On the front cover is a stylized, color-blocked, three-quarters portrait of a Handmaid. Within her figure are additional lines that sketch a brooch and the seams of the Handmaid’s cloak, but also form the image of a young woman with a ponytail, her arms outstretched in freedom. On the back cover is a stylized, color-blocked profile of a young woman with a pierced ear and a ponytail. Here again, another image is hidden: her hair tie and the gap between her head and her ponytail create the silhouette of a Handmaid.

Within the novel, both sets of images have corresponding characters who move between freedom and repression. Atwood returns us to the dystopian Republic of Gilead, but gradually reveals some utopian impulses. Most importantly, in the fraught context of today, she not only challenges us to hope again, but also warns us, in an epigraph from Ursula K. Le Guin, that “Freedom … is not a gift given, but a choice made, and the choice may be a hard one.”

But we might ask: Does The Testaments help us make that choice? Or does the novel—with its downplaying of broader issues of race and immigration, as well as its faith in the power of truth to overcome tyranny—take us further from solving these crises of the day?

The Handmaid’s Tale warned us, in 1985, about the dangers of authoritarianism wrapped up in religious zealotry, and did so from the perspective of a woman whose body, sexuality, and identity were controlled by powerful men. This warning has not always felt as urgent as it does now. Atwood herself admits that in the 1990s, after the collapse of the Soviet Union, “It looked as if, in the race between Nineteen Eighty-Four and Brave New World—control by terror versus control through conditioning and consumption—the latter had won, and the world of The Handmaid’s Tale appeared to recede.”2

Atwood’s MaddAddam trilogy, beginning with Oryx and Crake, in 2003, seems to be her effort to write in the tradition of Brave New World: to warn against consumption, marketing, privatization, and corporate greed (among other things). And yet, even before she finished the trilogy (with MaddAddam, in 2013), Atwood began to see signs that Orwell’s model of “control by terror” was regaining relevance. In a 2011 essay, she warned that—in the wake of 9/11, the wars in Afghanistan and Iraq, the Patriot Act, and the 2008 financial crisis—“America appears to be losing faith in the basic premises of liberal democracy.”3

Since the 2016 election, the loss of faith has been even more profound, and the world of The Handmaid’s Tale has reentered the foreground of our cultural consciousness. This is partially thanks to Hulu’s successful television adaptation of the book, and partially thanks to protestors wearing Handmaid costumes to oppose restrictions on women’s reproductive rights. 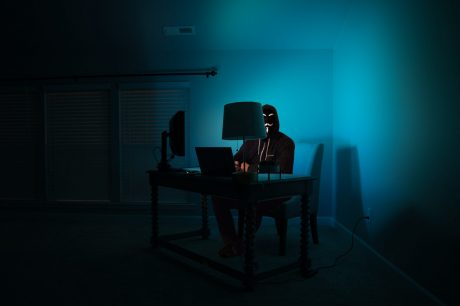 One of the challenges Atwood faces in The Testaments is the interweaving of many temporal layers. The novel must resonate with its present-day audience, even when it returns to the Gilead of The Handmaid’s Tale, which was extrapolated from the rise of the religious right in the 1980s. The continuities between these two periods make this task easier, but also of crucial importance.

Today’s Trump administration, like Gilead (a future state, as seen from the 1980s), is both a fulfillment and a corrupt betrayal of the 1980s alignment between evangelicals and political conservatives. Trump’s campaign slogan, “Make America Great Again,” expresses the same desire for a return to traditional values that we heard in the 1980s. A similar desire to return to an earlier time supplied the rationale for Gilead’s Commanders, who created a theocracy based on sexual subjugation and violence.

And yet in Gilead, as in Trump’s America, the promise of return is illusory: it’s a journey to something that never truly existed, and that can provide neither freedom nor security.

Unsurprisingly, The Testaments leans heavily on its contemporary context and offers a less sustained engagement with 1980s culture than did its predecessor. In The Handmaid’s Tale, for instance, one of the main characters, Serena Joy, was modeled on both televangelist Tammy Faye Bakker and antifeminist Phyllis Schlafly, who led the opposition to the Equal Rights Amendment.4 In contrast to this detailed dual portrait, The Testaments makes a few passing references to the 1980s-inspired Schlafly Café, in which the relatively privileged Aunts meet when they’re not busy training Handmaids or arranging marriages.

The references to contemporary America, by contrast, are much more frequent, though somewhat more generalized. We’re told that in the lead-up to the regime change that established Gilead, “People became frightened. Then they became angry.” In its early years, Gilead closes its borders, repurposes buildings to function as overcrowded and unsanitary detention centers, and forcibly relocates people of color. Later, the government news outlet purveys disinformation and labels the truth as fake news.

Chapter 23 is titled “Wall.” Though this refers directly to the brick wall surrounding what used to be Harvard Yard—an area that now houses Gilead’s central administration—it has obvious connotations in the age of Trump.

The Testaments, like The Handmaid’s Tale, also interweaves elements from Atwood’s own life and reading. The setting of Gilead’s government within Harvard University, for example, seems to be her imagined revenge for the acts of gendered exclusion she experienced as a graduate student at Harvard in the 1960s. While there, she was “not allowed into the Lamont Library, where all the modern poetry was kept, on account of being a girl.”5

Atwood studied Victorian literature at Harvard, and that, too, has left traces on her latest novel. The first epigraph is from George Eliot’s Daniel Deronda: “Every woman is supposed to have the same set of motives, or else to be a monster.” One of the three narrators, Aunt Lydia (whom we encountered in The Handmaid’s Tale), hides her memoir within a hollowed-out copy of Cardinal Newman’s 1864 Apologia Pro Vita Sua, the text in which Newman defended his controversial conversion to Catholicism. Aunt Lydia’s defense of her life, however, more closely resembles Robert Browning’s “Bishop Blougram’s Apology.” Both Browning’s Bishop and Atwood’s Aunt hold positions of authority within religious institutions, despite their lack of sincere belief. Lydia’s power and relative safety come at a high cost—one paid by other women. For example, Lydia arranges marriages for a Commander with a penchant for young brides, who seems modeled on the murderous Duke of Ferrara in Browning’s “My Last Duchess.” Atwood alludes to a group of Victorian texts that depict privilege, misogyny, hypocrisy, and self-justification—topics that are all too relevant both for Gilead and for today’s America.

In Gilead, as in Trump’s America, the promise of return is illusory: it’s a journey to something that never truly existed, and that can provide neither freedom nor security.

Atwood, in guiding us through her dystopia, is not without her flaws. Here, in The Testaments, she betrays some of the limitations of her own utopian imagination.

In the acknowledgments, she again claims that in The Handmaid’s Tale, “no event is allowed into it that does not have a precedent in human history.” Atwood has long used this argument to label her writing as “speculative fiction” and to distinguish it from science fiction, which she has dismissively defined as “books with things in them we can’t yet do or begin to do, talking beings we can never meet … for instance—the talking squid of Saturn,” and thus drawn the ire of science fiction fans and scholars.6

More importantly, The Handmaid’s Tale has been criticized for sidelining race, in order to focus on the suffering of white women.7 The Testaments is open to the same critique. This choice seems even more problematic today, in the context of Trump’s policies on immigration, the disproportionate incarceration of and police brutality against black Americans, and the increased boldness and visibility of white supremacist groups. Atwood has also faced criticism for her public reservations about the #MeToo movement, particularly her calls for transparency and due process in the University of British Columbia’s handling of sexual misconduct allegations against creative writing professor Steven Galloway.8

Atwood seems to be courting further controversy by including in The Testaments a plotline involving a false rape accusation against a man guilty of other sexual crimes. After orchestrating the false allegation, Aunt Lydia comments, “Innocent men denying their guilt sound exactly like guilty men, as I am sure you have noticed, my reader. Listeners are inclined to believe neither.”

Atwood formally challenges herself to weave together three narrators, each with her own mixed motives and her own timeline of events. There is a Canadian teenager, who recounts her recent past; a young woman, who explains her childhood and education in Gilead; and Aunt Lydia, whose reminiscences span decades, from the founding of Gilead to events that may precipitate its downfall. Readers can easily follow this complex structure, because Atwood gives her three storytellers distinct voices.

The novel also offers visual cues. The first page of each chapter features an image indicating the chapter’s narrator: the girl raised in Gilead corresponds to the novel’s front cover, the Canadian teenager to the back cover, and Aunt Lydia is signaled by the nib of an ink pen. (Inside the nib there appears to be a tiny fist. Is the fist raised to punish, or to protest? Likely both.) 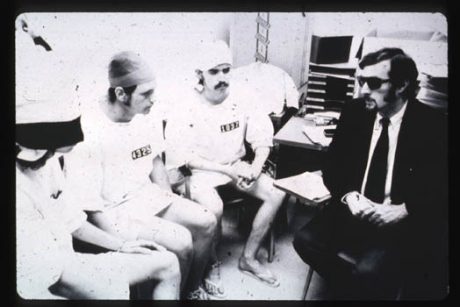 The three characters each play a crucial role in a plot premised on the assumption that exposing Gilead’s corruption to public scrutiny will make a difference. This assumption seems quaintly, perhaps dangerously, optimistic. After all, in September the editorial board of the Washington Post—the paper that doggedly pursued the Watergate scandal nearly 50 years ago—ran an opinion piece about the impeachment inquiry against Trump titled, “The Ukraine Facts Are Clear. But Does Truth Still Matter?”9 Fifty-two senators just decided that it does not.

In The Testaments, Atwood offers a strong sense of narrative resolution and hope for political change. The results are unsettling. The book is an Orwellian dystopia given a Dickensian ending, with the truth revealed, identities discovered, and characters reunited. It is full of utopian hopes that may no longer be relevant, but that we must make relevant again.

Featured image: Filming of “The Handmaid’s Tale” at the Lincoln Memorial. Photograph by Victoria Pickering / Flickr 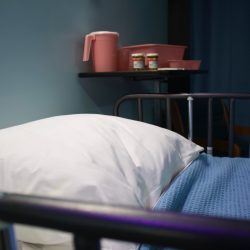 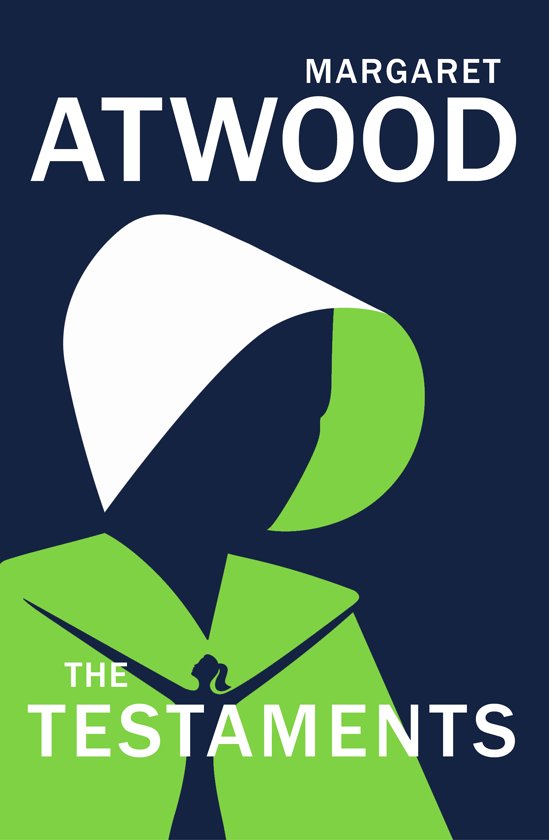