Mapping a Young America
Maps are ubiquitous now, embedded in nearly every mobile device, but in the early days of America, maps were far more precious. In Mapping the Nation, Susan Schulten argues that the formation of the ...

Maps are ubiquitous now, embedded in nearly every mobile device, but in the early days of America, maps were far more precious. In Mapping the Nation, Susan Schulten argues that the formation of the United States allowed cartography to become an institutionalized practice in the country. At the same time, and perhaps more importantly, the newly produced maps afforded the young nation an understanding of itself as a geographical whole. Schulten’s account begins with the American Revolution, in part because, before this, mapmaking and map collecting were ad hoc activities. Once a federal government was established, geographers and explorers were able to petition it for funding for the production of maps and atlases, as well as for the establishment of archives to give cartography—and federalism—durable institutional roots.

Mapping the Nation complements Benedict Anderson’s Imagined Communities (1983), which also traces the concept of the nation to the late eighteenth century and to the public circulation of printed documents. While Anderson’s work focuses on the role of novels and newspapers in creating a nationalist ethos, Schulten argues that text alone was insufficient in providing an accessible epistemological perspective for citizens trying to recognize the new nation. She asserts that “maps and charts were devised because they conveyed what words and statistics could not.… They met the needs of a society concerned with national identity” through images—maps—that could be comprehended all at once. 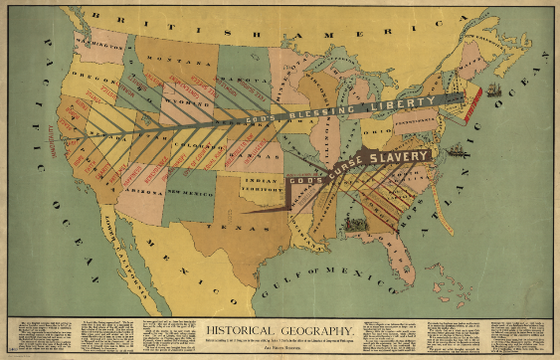 One powerful but deceptively simple “cartographic idea” that Schulten finds useful for illustrating the kinds of thinking that became possible with maps was the frontier: “without a map, it makes no sense, nor is it a meaningful observation about physical space or history.” A frontier line drawn on a map of the American West visually implied the “manifest destiny” of an America stretching from the Atlantic to the Pacific. For designers and visualization enthusiasts, Schulten’s discussion of the origin of the frontier line and other formal cartographic elements in the context of their historical importance is satisfying. For instance, isolines were developed in 1817 by climatologist Alexander von Humboldt to describe the geography of areas experiencing the same temperature. At the time, the isoline technique was considered somewhat superior to the still popular (and still controversial) choropleth mapping method, which depicts thematic data with county-level shading, a technique that is now also used for mapping patterns over other smaller geographic units like city blocks and census tracts. Choropleths obey political boundaries even where the social, agricultural, and climatological patterns they depict may not. They originated during the 1850s and debuted publicly in 1861 to depict slave population density as a kind of abolitionist propaganda.1

One of the curiously quiet areas in the book, especially given Schulten’s interest in thematic mapping (for which she won a Guggenheim Fellowship), is the relationship between maps and timelines. Schulten plots a way into this question with her discussion of the work of teacher and cartographer Emma Willard, who in the mid-nineteenth century experimented with graphical forms and produced both radically temporal maps and decidedly cartographic timelines.

But Schulten’s discussion of Willard’s graphical experiments does not address why they were not developed further by others, especially given how successful Willard’s history textbooks were at the time. Was it because she was a schoolteacher and a woman at a time when neither teachers nor women had much authority? Was it because her techniques were harder to standardize than other mapping methods?

Maps are visual, and thus so well-suited for display on full-color screens with zoom capabilities that the competitive pressure to do something more than just a book is itself historically rooted.

These days, physical books are under pressure to compete with new forms of reading—portable e-books, hyperlinked blogs, interactive data visualizations. Maps are visual, and thus so well-suited for display on full-color screens with zoom capabilities that the competitive pressure to do something more than just a book is itself historically rooted. Books of maps have long been oversized, printed in color on expensive stock, and often experienced with a friend. Schulten—if not the University of Chicago Press—embraced the opportunity to think about how Mapping the Nation could be both a standard, relatively affordable print book and an immersive, web-based social experience that recalls the feel of paging through an atlas. With support from a coalition of departments at the University to Denver, Schulten built Mappingthenation.com—a welcome departure from those dreaded disk-inclusions that are often called into service as visual appendices, but which inevitably get lost or damaged, and are hard to share effectively. Both the book and the website can stand alone, but together they productively bring the careful, intimate, controlled narrative of the book form alongside the full-color, hyperlinked social nature of web-based projects to convincingly argue that America without maps would have been a different kind of place altogether.

Mapping the Nation: History and Cartography in Nineteenth-Century America