Mend Your Ways
An exhibition of Japanese textiles celebrates repaired clothing: flipping salvage into sustainability, and damage into beauty. 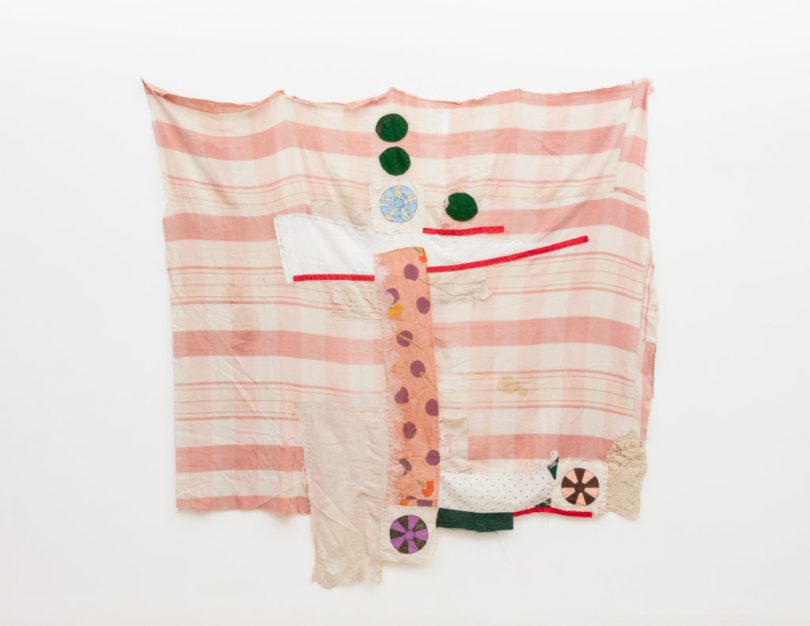 Make amends to the planet. An exhibition at the Japan Society, in New York—now viewable only online, due to the COVID-19 lockdown—reveals the aesthetic potential of repaired clothing. It transforms salvage into sustainability and damage into beauty. Most museum exhibitions pride themselves on displaying an exceptionally high level of an aesthetic we already believe in. Boro Textiles: Sustainable Aesthetics leverages the prestige of the museum to propose a different aesthetic.

Boro means “rags” or “tatters” in Japanese. Boro garments have been repaired with patches and stitches. Some have been worked over so many times, by successive generations, that the original fabric can no longer be detected. The name boro implies detritus, but the current exhibition delivers what the Japan Society calls “essential principles of Japanese ethics and aesthetics.” These turn out to be an ethics of endurance and continuity, and an aesthetics of composition, layering, and handcraft.

We now dress to destroy our world. Like the microfiber in our rising seas, the facts continue to accumulate. With sobering symmetry, the average American buys about 70 new items of clothing and throws out about 70 pounds of textiles a year. An estimated 80 billion new clothing items are purchased around the globe annually. Only 15 percent of our discarded clothing gets reused or recycled.

The endless selfies in new clothes for Instagram, TikTok, and WeChat are fueled by online shopping for fast fashion. To look good online, a garment doesn’t have to be sturdily sewn from a durable material, or to move well on you. And it only has to look good once. Repeating an outfit in public, now meaning online, has become a social offense dreaded by many, not just the Kardashians. So, the cheaper the better.

Why blame only social media? Blame the industrial revolution, too, beginning as it did with textiles. Blame capitalism, and commodity fetishism. We could also blame a deeply ingrained human love of wearing something new. Pristine, fresh, different clothes make us feel like we’re starting ourselves all over again.

Or, instead of just casting blame and moving on, we could—as this exhibition suggests—turn in a different, positive direction.

We need a jolt from elsewhere to help us understand that we are addicted to shoddy new clothes.

Out of professional inclination, cultural anthropologist Chuzaburo Tanaka (1933–2016) collected heavily mended clothes and blankets from northern Japan. Circumstance helps explain why mending was so widely practiced in this area. Cotton was not indigenous, therefore expensive. Most people were poor. At the heart of the Japan Society’s exhibition are 50 pieces of Tanaka’s collection, all from the 19th and early 20th centuries.

The exhibition’s pieces are illuminated from within to make them glow; they are hung over mirrors to make the insides of garments or the soles of shoes visible, as if they were precious surfaces. The exhibition cannily frames its mended items with high-end fashions by cult Japanese designers Rei Kawakubo, Issey Miyake, and Yohji Yamamoto, and with lyrical photographs of boro textiles worn in nature, by artist Kyoichi Tsuzuki.

These frames bring out what is genuinely gorgeous in the color, texture, and detail of the mends. An unraveled edge becomes tracery; layered repairs become a textured landscape. This exhibition takes the choices that menders make—choices about patch fabrics, thread colors, overlaps, and stitches—and treats them with the seriousness afforded Old Master oil paints.

The exhibition’s wall text insists on the Japanese character of the boro aesthetic. Nationalism aside, we should take this attitude as a comment on the characteristically First World, European qualities of the fashion industry and fashion mentality. We need a jolt from elsewhere to help us understand that we are addicted to shoddy new clothes. 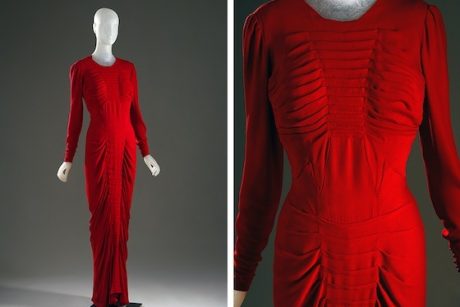 After a Queer Fashion

I have recently been to Japan, and—alongside the hyper-fashion in some neighborhoods of Tokyo—I really did see mending everywhere. I saw a young man who was the epitome of cool chic, complete with man bun, wearing a dynamic mosaic of mends all over one thigh of his jeans. I saw a factory worker in shoes whose toe area had become a complex map of time and pressure. I saw a store that called itself an art gallery selling intensively repaired denim blankets as if they were majestic tapestries—which, I became convinced, they were.

Most radical of all is the Japan Society exhibition’s exhortation to visitors to engage in its aesthetic yourself. Completely unlike most museum shows—which leave you dazzled by the virtuosity of artists—this exhibition urges you to realize you have the ability to do what it displays. Sure, it will take some practice and some equipment, but very little of either.

In a truly democratic move, the museum offered, as part of its pre-COVID exhibition programming, a class in what is called “visible mending.” Classes on this approach were starting to be offered at local Ys and craft stores in towns across the country before the pandemic, and—now that stay-at-home orders dictate our activities—there are plenty to be found on the internet.

One needle, one piece of leftover thread, one bit of old fabric, and you’re on your way. You can also now buy the cult Japanese book of visible mending—Hikaru Noguchi’s Darning: Repair, Make, Mend—newly translated and issued from Hawthorn Press. The instructions are clear and the illustrations inspiring. As the author promises, one hour of elementary stitching and you’ve reinvented a whole piece of clothing.

Your salvage might not even take longer than online shopping for something new. True, the decisive click is fast. But what about the aimless browsing, placing the order, picking up the package, trying the item on, realizing it doesn’t fit or is made of terrible stuff, packing it back in the box, and having it sent back?

The visible-mending movement wants to be seen. Far from hiding the mend, let it shine. Awkward work and contrasts are almost preferable. The whole point is to communicate this new-old aesthetic. Proclaim the beauty of the sustainable. Mend your ways.

This article was commissioned by Stephen Best. 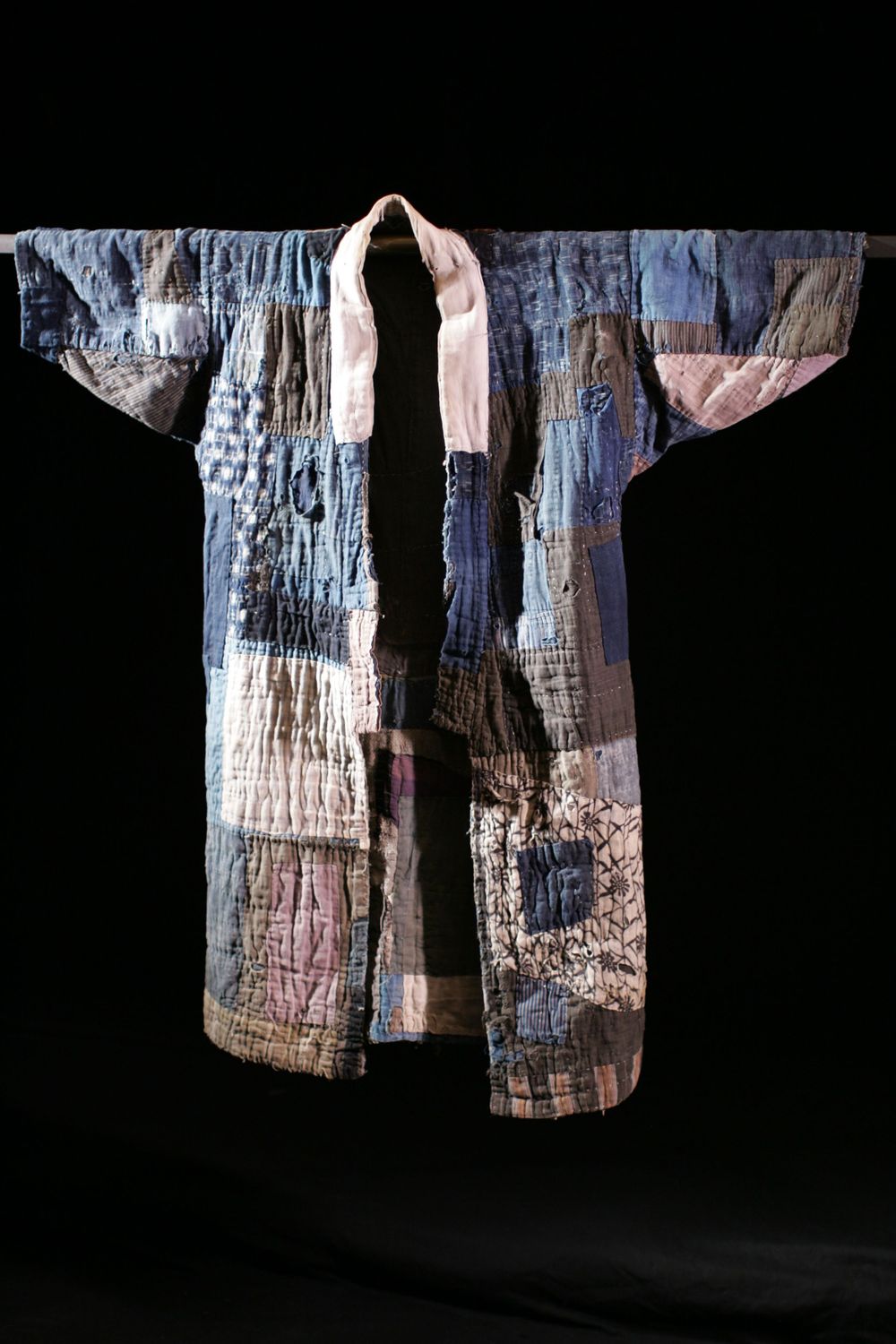