Monte Ulia, Euskadi
This is the latest installment of Public Streets, a biweekly urban observations series curated by Ellis Avery. You may have visited San Sebastian, Spain—Donostia, as the locals began calling it again ... 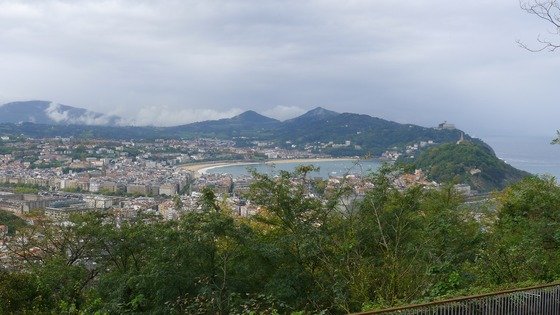 You may have visited San Sebastian, Spain—Donostia, as the locals began calling it again after Franco died in 1975 and the street signs began to revert back to Euskera. Maybe you spent a couple summer days on the beach of la Concha during your tour of Europe after college, or perhaps you’d been waylaid on your way to the Guggenheim in Bilbao. And sure, you may know the pintxos loaded with plum-colored hams and oily sardines plated on the counters of oak bars in the old part of town, but everybody knows about the pintxos. Even the guiri tourists, after a couple days in the Basque Country, will have their favorite plate at their favorite bars. Maybe you’ve even discovered the metallic taste of barely-cooked venison at the Bar Senra, or an inconspicuous door leading to a hash-filled basement nightclub on the harbor, or if you are of a certain age perhaps you will even know the tuxedoed waiters pouring Ballantine’s over ice for sunburned Brits at the Hotel Londres. But you, almost certainly, will not know the three mountains surrounding the city’s three harbors: Igueldo, Urgell, Ulia.

There is, I suppose, the off-chance that you do happen to know one of the three mountains surrounding San Sebastian (or the three mendiak as the young children who speak only Basque would say, or the three montes, as their parents, the generation without language, would say). In this case, it is surely Monte Igueldo, the westernmost peak, the most traditionally handsome and accessible of the three sisters. You’ve gone to Igueldo, no doubt, to visit Eduardo Chillida’s rusted sculptures reaching from the sea at the base of the mountain, or you’ve taken the rickety funicular up to Igueldo’s battered old amusement park with a few friends and a Coke bottle half-filled with rum. A great way to spend the afternoon, if you’re into that sort of thing.

If you’re the adventurous type, or maybe just had one too many kalimotxos at the little café next to Cathedral San Telmo in the old part of town, then I suppose it’s possible that you’ve also wandered onto the stone pathway that spirals up out of the middle of the old part of town to the summit of Urgell, the second sister. It’s impossible to miss—a reaching promontory that shoulders the fifteen-foot rollers arriving from the Bay of Biscay during a winter storm. Above you leans a statue of Jesus, as tall as Godzilla looming over the old fishing boats in the harbor. You’ll take a picture from the old fortification. Everyone takes a picture.

But even in the unlikely scenario that you have, in fact, set foot on Igueldo and Urgell, surely you do not know Ulia. She is the sister with the blackened tooth and the one lazy eye.  Neither the loveliest nor the most pleasing, Ulia, with her unmistakable history of violence and hidden beauty, is the sister that you will think the most of, that you will find yourself remembering in the twilight minutes before sleep.

Ulia, the eastern bookend to the town of San Sebastian, is the lesser of the three mountains in many ways, the only peak unadorned by a roller coaster’s tiara or a statue’s crown. It requires conscious effort to find yourself at the end of the Gros Beach, in Sagüés, the last barrio in San Sebastian, or maybe simply a desire to see an end to things: to reach Ulia, you used to have to slip through a break in the chain link fence before disappearing on the goat trails; now the sidewalk simply ends. No signage, no invitation, just a few cinderblock paving stones trailing off into dirt and sea stone. 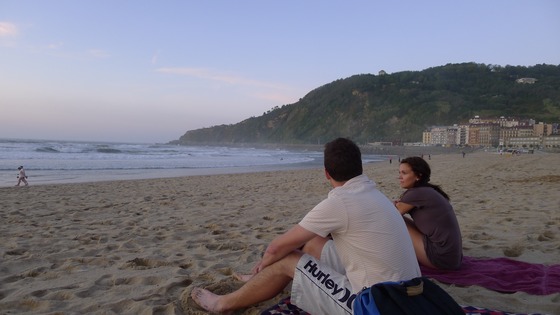 The goat trails from the end of the sidewalk lead to the lesser-known coastal routes of the famous Camino de Santiago de Compostela, and if you walked three hundred miles west (past those better known mountains of Igueldo and Urgell), eventually you would arrive at the desiccated bones of Saint James. If you are making the climb in the fall, the surfers on Zurriola beach below you will already be wearing their slick black wetsuits, and in the air you may detect the faint odor of a nearby farmer burning his chaff, or of teenagers burning hash in crooked porros, or the fetid smell of the tide pools at Mompas point.

If the sun is out and the sea breeze isn’t too cool, the old viejos verdes will be out on the lower shoulders of Ulia, stretched out naked in the grass or wearing women’s underwear, masturbating lewdly and ridiculously as hikers pass nearby. The frayed trails begin to braid and consolidate as you climb the ridge leading to Ulia’s sloping summit, and you will pick your way around crumbling lookouts where the old Basque whalers once drank young red wine from leather bags and waited for the schools of right whales to pass offshore, then past pillbox bunkers left over from one war or another. If you follow the path far enough you might come across a woman with long gray braids leading a group of children in handmade clothes that could be from another century, perhaps even the century of the vanished old whalers. When you see this strange group, you will know that you’re near the commune of mystics that offer beds to pilgrims along the Camino, and that they will insist on offering you tea and telling you of the meaning of the walk along the Saint James way.

These are just a few the imperfect beauties of Ulia, which you surely have not yet discovered in your forays around San Sebastian and her lesser mountains: the unlikely mixtures of mysticism and warfare, the asymmetries of sex and survival. There is a peak, of course, and if you follow the path long enough you’ll eventually land in the fishing village of Pasaia. All of these are the parts of Ulia that elude both guide books and word of mouth, but one day, perhaps, you will know them for yourself.