Murakami on Friendship
It might be fair to say that Haruki Murakami has had two narrative modes in his novels and short stories. Works like Norwegian Wood (1987) illustrate his “normal” mode, in which he recounts a ... 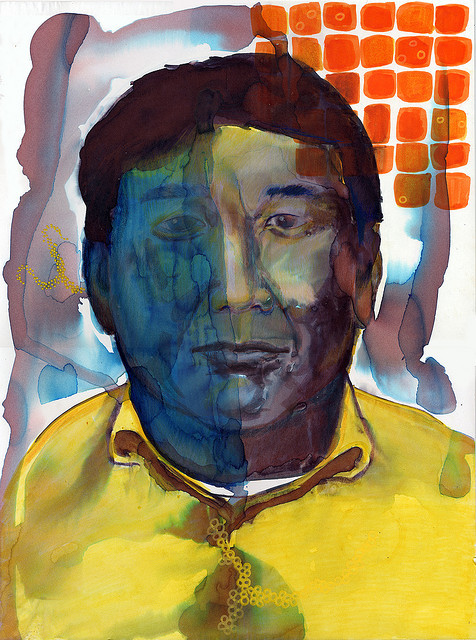 It might be fair to say that Haruki Murakami has had two narrative modes in his novels and short stories. Works like Norwegian Wood (1987) illustrate his “normal” mode, in which he recounts a nostalgic, affecting tale of relationship and loss. In his “weird” mode—weird in the eerie, old-fashioned sense—he gives us talking animals and dream states. This mode is at work in his sprawling novel 1Q84, where we even get a small, lopsided extra moon that shows up in the night sky, and tiny megalomaniac people walking out of a goat’s mouth as the world slips into a different dimension.

Colorless opens with the titular protagonist, 36-year-old Tsukuru, reflecting on the worst betrayal of his life, when his four best friends, whom he had met in a high school volunteer program, cut off contact without any explanation, leaving him bereft and suicidal. Now, 16 years after the collapse of those friendships, Tsukuru is a designer of railway stations. He’s dating a woman, Sara, who believes that the pain of his friends’ desertion is still holding him back emotionally. She insists that he track down the four and talk to them about what happened. Because Tsukuru is falling in love with Sara, he agrees.

His former friends all have colors in their surnames—“red,” “blue,” “white,” and “black”—while Tsukuru does not. Indeed, he has always felt that there is something blank and colorless about himself that caused the others to turn away from him. Much later it turns out, of course, that this distinction is a meaningless self-laceration; exactly the kind of paranoid notion to which rejected people are susceptible. Yet Murakami presents the friends’ colors as genuinely significant, even leaving the title as a kind of bread crumb on this alley that goes nowhere. This may be the point. After his friends cut him off, Tsukuru could only emerge from his despair by re-making himself into a new man, to such a degree that looking in the mirror he imagines that “the boy named Tsukuru Tazaki had died … And what stood here now, breathing, was a brand-new Tsukuru Tazaki, one whose substance had been totally replaced.” This idée fixe about the abandonment, that he had no authentic “color” of his own, may not have had any truth, but, to Tsukuru, it did have a reality.

Murakami’s way of presenting every element of this tale as if it’s evidence in a mystery recalls his use of the noir detective genre in early works like A Wild Sheep Chase (1982), about a sheep on a mission to suppress historical memory (a theme that seems as relevant as ever, with the Japanese right wing engaged in fresh attacks on the Asahi newspaper for covering the coercion of comfort women during World War II). Murakami’s interest in genre pastiche has faded over the decades, but the mysteries remain. He may have described his project best in a 2008 interview about his third-to-last novel, Kafka on the Shore:

Kafka on the Shore contains several riddles, but there aren’t any solutions provided. Instead, several of these riddles combine, and through their interaction the possibility of a solution takes shape. And the form this solution takes will be different for each reader.

Around the time that Tsukuru resurrected himself, at age 20, a new friend appeared in his life, Haida, or “Mister Gray,” who liked to play a recording of Liszt’s “Le mal du pays.” Listening to the “quiet, sorrowful piece” back then, Tsukuru recalled that one of the friends who abandoned him, Shiro, or “White,” often played the same piece, causing Tsukuru to feel like “he’d swallowed a hard lump of cloud.” Later on, “Le mal du pays” comes to seem like the key to a sadness that grew to engulf Shiro, and this connection recurs throughout the novel in the music, both invoking and mimicking its haunting repetitions.

Murakami’s earlier career as the manager of a jazz club is often mentioned as sign, or source, of his Westernness (or un-Japaneseness), but his rhythms and repeated motifs, while certainly jazz-like, are also, in their delicate and disciplined unfolding, eminently Japanese. Tsukuru’s memories; the colors of his friends’ names; the sound of “Le mal du pays”; the hypnotic routines he falls into, swimming, working, meeting Sara for a date at a quiet, elegant restaurant: the themes in Colorless Tsukuru Tazaki and His Years of Pilgrimage build like music. Absent menacing elves and supernumerary moons, the novel still carries the same sense of mesmerizing, implacable movement, the alternate Murakamian world that pulls the reader along on its own current.

Murakami is a universe-builder, but he is not a puppet-master. Like Dostoevsky, another writer unafraid of high page counts, he seems very present in his work, in his loves and hates, and in his choice of impish symbolism, alternately folkloric and inexplicable. Murakami’s fascination with animals, who appear as key figures in his books almost as often as humans do, was evident in a talk I had the good fortune to attend in the late ’90s, when he spoke almost exclusively about a trip to the Central Park Zoo. He wants to share: this is his favorite piece of music, his favorite meal, his favorite way for a woman to dress (usually in something “simple and subdued,” often navy blue).

In Colorless Tsukuru Tazaki and His Years of Pilgrimage, as in many of Murakami’s books, a character’s clothing often seems to provide an external indication of their soul, as when Sara (always impeccably dressed) gives Tsukuru an elegant new tie, and he realizes that his old one is as shabby and neglected as his emotional life. This is not to say, though, that the bodies beneath, particularly those of his women, carry any less significance. Tracking Kuro, or “Black,” to her home in Finland, “the true weight of sixteen years struck [Tsukuru] with a sudden intensity. There are some things, he concluded, that can only be expressed through a woman’s form.” A murky eroticism lingers in Colorless Tsukuru Tazaki and His Years of Pilgrimage, like an echo of 1Q84’s eerie world, creating a sense of sex, dreams, and exploitation all meeting on uncertain ground. Tsukuru often has erotic dreams about Shiro and Kuro, the two girls from his lost group of friends, and the shame he feels about these dreams and the awful fate that befalls one of the girls are related in his mind, though the connection is never quite resolved. In perhaps the “weirdest” scene in the book, Tsukuru wakes from another of these erotic dreams to find Haida performing oral sex on him. Tsukuru is never sure if this was a dream within a dream or if “Mister Gray” raped him, and this, too, is never pursued.

That Murakami can raise these questions and never answer them without the reader feeling cheated may be his most uncanny sleight-of-hand. If we aren’t disappointed, perhaps it’s because Murakami finally allows Tsukuru to smash through the dense symbolic fabric of the novel’s universe to assert his will and humanity in his relationship with Sara. This is the heroic Murakamian moment: a surge into “the real”; an E. M. Forster–like chance for Tsukuru to “only connect.” Perhaps Murakami is saying that, while the signs we find when reflecting solipsistically on our lives are usually meaningless, moving past them is still a monumental act of bravery and self-knowledge. What turns out to be the most important question in Tsukuru Tazaki’s pilgrimage is not where the signs lead him, but if he will find the strength to try again when all those signs have failed.

Colorless Tsukuru Tazaki and His Years of Pilgrimage