Mysteries
In medieval England, craft guilds—nailmakers, woolworkers, saddlers, grocers—designed scenes from Biblical history, beginning with Genesis, coursing through the life of Christ, and ending with ... 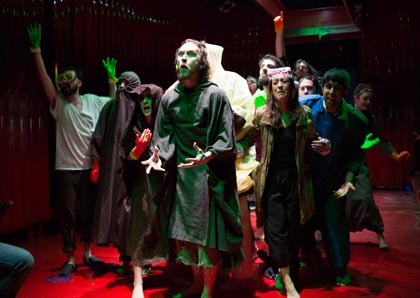 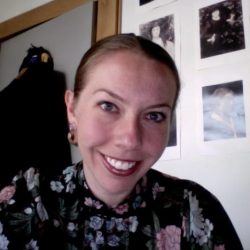 In medieval England, craft guilds—nailmakers, woolworkers, saddlers, grocers—designed scenes from Biblical history, beginning with Genesis, coursing through the life of Christ, and ending with Judgment Day. Guild members performed these so-called “mystery” plays annually on the feast day of Corpus Christi. Each scene was performed over and over again throughout the day, on a wagon that rolled through a city, so that the citizenry could witness, seriatim, the master narrative of Christianity.

As well as providing edifying entertainment, these plays provided an occasion for two kinds of experimentation. The first was theological: the plays treated certain episodes of Biblical history with an astonishing degree of irony. In many cases, this irony was a way to underscore the audience’s ever-present role in sacred history. When Pontius Pilate pondered whether to crucify Christ or the thief, he turned toward the audience and asked them for their verdict. If they remained silent, wishing Christ to survive, the play would stall. If, on the other hand, they voted to crucify Jesus Christ, the play continued, but with the audience made aware that they were always already complicit in Christ’s sacrifice.

The second kind of experimentation the plays enabled was theatrical. Each play was written, designed, and controlled by a different group of artisans or merchants. Each had its own set of actors. Each had to make connections with the plays surrounding it, but not a connection of precise narrative continuity; rather, each play was bound together with those around them by a common awareness of an overall project—to stage Biblical history. Because of their ensemble structure, the plays force the issue of how to create a large-scale mega-narrative out of a series of associated short parts. For this reason, the playwrights held to certain conventions. By and large, heroes spoke in high-register language; villains used slang, wobblier verse forms, and more percussive sounds, so that their moral turpitude registered in hearers’ ears before it registered in their thoughts. Satan, however, was supremely engaging—funny, seductive, charming. He was bad, but likeable.

Throughout the plays, the audience was reminded that the history of the Christian religion is one that does not respect linear temporality. The past of Christ’s self-sacrifice is past, present, and future; our salvation is perpetual; Mary, who lived in history, lives on in our present lives, protecting us and mediating between us and God. Passages from the Bible woven into the episodes made the plays palimpsestic, referring to their own source material and literary affiliations even as they reinvented and redeployed them. Thus the throughlines of this episodic medieval mega-narrative are formal, stylistic, and theological.

In these very ways, Ed Sylvanus Iskandar’s The Mysteries honors its debts to history. Composed by 48 playwrights and stretching over five to six hours, The Mysteries is a contemporary reimagining of these medieval mystery plays being performed at the Flea theater downtown through mid-July. The play cycle is intensely jocoserious, taking its theology as a provocation for community reflection, meditation, and introspection, and riffing deftly and recursively on other literary traditions. By rejecting the compulsion to treat Biblical history as completed and thus part of the simple past, The Mysteries is a triumph of transhistorical experimental theater. It remains extremely faithful to the basic structure of the medieval plays, sometimes even integrating slices of Middle English from the plays themselves—often the most famous, the York mysteries. When Lucifer urges Eve to eat the apple of the tree of knowledge, he says, quoting the York Play’s diabolically plosive alliteration, “Bite on boldly.”

The episodes that make up The Mysteries, like their medieval antecedents, are at their best when gravity and levity come together. In one scene, Joseph strokes a red rose that is clipped into his jeans near his penis while saying that he has “a hard decision” to make in choosing a wife. Although partly evoking the Bachelor series, the scene also recycles a moment from the medieval plays, where Joseph carried a branch that burst erotically into bloom when he approached Mary; as it did so, Joseph would make a series of buffoonish puns on his penis and its floppiness. (Joseph’s flaccid penis is, of course, theologically key: an impotent husband is no threat to Mary’s virginity.)

The Mysteries also adroitly refuses the idea of linear history. The villains in the Slaughter of the Innocents carry handguns; there are unmistakable gestures toward contemporary Middle Eastern political violence and references to our global ecological crisis peppered throughout the plays. The most interesting instance of temporal overlay comes as Jesus tweets about himself to promote his own following, and the disciples debate whether this kind of public self-promotion will play well or poorly for the emergent Christian faith. The insertion of 21st-century communication technology replicates what medieval performances of these plays must have felt like: you see the Creation of the World enacted in front of your house; across town, some hours later, your best friend witnesses the same scene; later, you talk together about your experiences, shared, though shared distally, of the same event.

The sequence has its infelicities, but that is the nature of collaborative theater. The plays rely far too heavily on an inert Bacchanalian sexuality for their aesthetic continuity: there is a lot of nudity, a lot of kissing, a lot of sexual violence, a lot of fondling, and too much urinating. If this hypersexualization and hypercorporealization had been done in a way that seemed motivated by plot, it could have been extremely engaging. Instead, it feels distracting and flat. The plays also rely so pervasively on profanity that it becomes meaningless in these Mysteries: if every character swears, the swearing does no theological or philosophical work any more. This generalizing of the profane undermines the extraordinary moral, ethical, theological, and dramaturgical sophistication of the plays in other regards.

These faults are compensated for by the creativeness of the staging, the excellence of the music and sound design, the innovativeness of the direction, and the quality of the acting. For those interested in either historical literature and its availability to modern reinterpretation or in experimental theater writ large, The Mysteries will seem brilliant, inspiring, thought-provoking, and—perhaps above all else—fun.