Mysteryland
This is the latest installment of Public Streets, a biweekly urban observations series curated by Ellis Avery. “I have come here to lose the smog,” Joni Mitchell sings in her trademark falsetto, “and ... 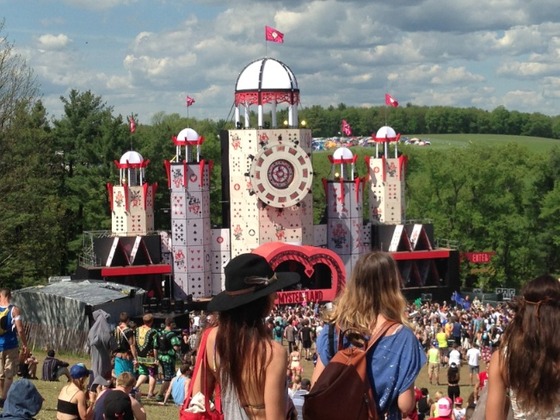 Mysteryland, 2014. Photograph by the author

“I have come here to lose the smog,” Joni Mitchell sings in her trademark falsetto, “and I feel to be a cog in something turning.” Her imagined destination (and the song’s namesake) is Woodstock, the year 1969. Forty-five years later, some things have changed: the possibilities in electronic sound have ballooned beyond the Wurly synthesizer Joni plays, and Yasgur’s farm—where Woodstock happened—is gone, the hallowed land now home to the Bethel Woods Center for the Arts. But the basic impulse persists: city people still need to lose that smog, to get somewhere green, to find a reprieve from the machinery of daily life through song and celebration. This past Memorial Day weekend saw New Yorkers and other urbanites doing just that at Mysteryland, the first music festival to be hosted on the iconic Bethel grounds since Woodstock itself.

Held at various locations in the Netherlands since 1993, and in Chile’s Mostazal commune since 2011, Mysteryland is billed as a three-day “multi-sensory festival that draws creative, electronic-music-loving tastemakers from around the world.” This premise found renewed purpose in the rich heritage of Mysteryland’s first US location: beyond the big green bowl (the natural basin in Max Yasgur’s land that attracted the original Woodstock organizers to the spot) lay the festival campsite, named “The Holy Ground” in homage to its precedent. The valley was buoyant with bubbles in all colors, though electric red and blue held sway: many city dwellers unaccustomed to camping availed themselves of the Mysteryland “survival kit,” which included a tent in one of the event’s two official colors.

The space was sprawling, with old wooden livestock fences subdividing it into what felt like a playground for grownups. Though the majority of Mysterylanders were in their twenties and thirties, a small number were a couple of decades older, perhaps more interested in a nostalgic experience than an electronic one. It’s doubtful, though, that the place looked too familiar: in keeping with the rave scene, Mysteryland was deliberately stylized, with a variety of ways to spend time. If you grew tired of hanging out at “The Boat”—a wooden ship-like stage-cum-dance-floor, with six huge psychedelic butterflies towering over it like masts—then you could meander down into the bowl, to hear big names like Steve Aoki and Moby serve up heady house music on the main stage, which this year was a Lewis Carroll–esque castle of giant playing cards with an illuminated red heart at its core enclosing the DJ. 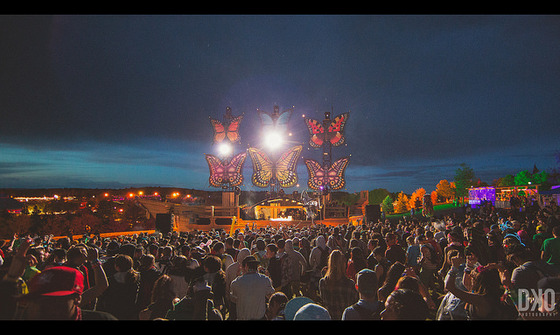 Back on high ground behind the castle, one of the fences carved out a mellower strip: chillers reclined in trippy golf carts with luminescent turtle shells for roofs, while photo-opportunists took turns kissing in front of the hot-pink love shack, or sitting in the teddy-bear-lined rocking chair, itself nestled against a zombie-eyed 10-footer, the granddaddy of teddies. A number of art installations were also in view, from an actual money tree, with bills of all currency shellacked over its white, tepee-shaped trunk (emblematizing the cosmopolitan crowd? ironizing their disposable dollars?), to a mural being painted by an auburn-haired beauty in Mysteryland real time, depicting a bald, bare-breasted orange woman against a primordial nightscape, a third eye gazing lazily out of her forehead.

It was these designed opportunities for expression and performance that made the place feel closer to an East Coast Burning Man than a Woodstock. Mysteryland departed from both of these templates, however, by carefully controlling the free play it invited. Woodstock was notoriously loose and unwieldy: ill-prepared organizers lost control of Yasgur’s grounds when thousands more arrived than were expected, cutting through the festival fence and side-stepping the $24 entrance fee (about $150 in today’s money). No chance that kind of stunt would work at Mysteryland, whose gates were staffed by drug-sniffing dogs and security guards performing pat-downs.

Elevated at the end of the mellow strip was a smaller stage, which waylaid my party for most of the day: Sin Salida, no escape. Run by an artists’ collective and decorated in the macabre Día de los Muertos style, it offered up a mix of baile funk and Latin heat captivating enough to uphold the promise of its name. The ivory profile of a lovely woman rose over the bar, dancing wavelike in a sweeping black lace skirt layered over a matching bodysuit. Turning around, she revealed the other side of her face: painted grey and gaunt, with bones etched in black around her mouth and eyes. 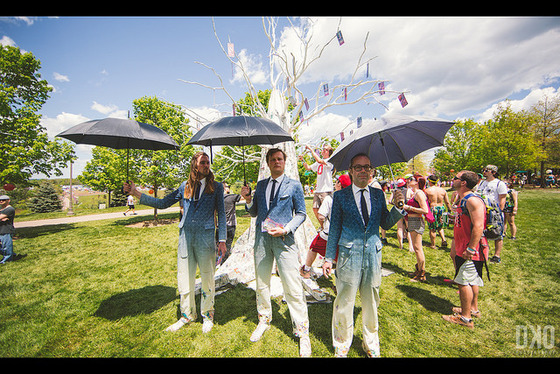 She and her companions were engaged in a kind of necrophilic burlesque show. One of them, with red hair teased into a furious halo to frame her Frankenstein-stitched face, shed her white bridal robes and showered herself (and the eager dancers in the front row) with neon orange paint, smoothing it over her bare chest to create a thin film, now her only garment besides a minimal pair of black underwear. These were the lordesses of the stage, with everyone else at their mercy: when they instructed the crowd to kneel during a lull in the song, and rise only at its climax—the longed-for return of the beat—everyone obeyed; when they moved through the dance floor offering a select few a sip of their white tequila, all hoped to be among the chosen. As my friend sipped, a tiny snail stirred at the bottom of the bottle.

The untouchable aura that the muertas projected was by no means the Mysteryland norm. Necessity bred new friendships, as strangers pooled what resources they had, from paper and pills to sunscreen and golden glitter—surely, in this regard, with the same spirit of peaceful openness that prevailed at Woodstock. Periodically throughout the day, friendly people smilingly shouted, “I’m a Big Chiller!” as they passed, reading the slogan on my ’70s T-shirt. “Try these on,” another stranger said, handing over a pair of wonky glasses that fractured the landscape into a prismatic mix of spirals and pixels.

As the day waned into twilight, one of my friends wondered aloud how Woodstockers would have pictured this revival. “Not like this,” another one said firmly, indicating the elaborate digital stage apparatus, the heart-shaking bass, the branded booze tents. Apart from the free-loving vibe, Mysteryland seems to stand in stark contrast to Woodstock: one is electronic, the other was folk; one’s profits are bolstered by corporate sponsorship, the other’s net losses were sustained by the private individuals who backed it. Mysterylanders, however, appeared unperturbed by this contrast, more engaged in the pyrotechnic light shows at the main stage than concerned about the companies that helped pay for them. As Joni preaches,

Caught in the devil’s bargain

And we’ve got to get ourselves

Back to the garden