Naples into Words
In My Brilliant Friend, the fourth and most recent novel by Elena Ferrante to be translated into English, all by Ann Goldstein, Naples provides the absorbing backdrop to the narrator-protagonist ... 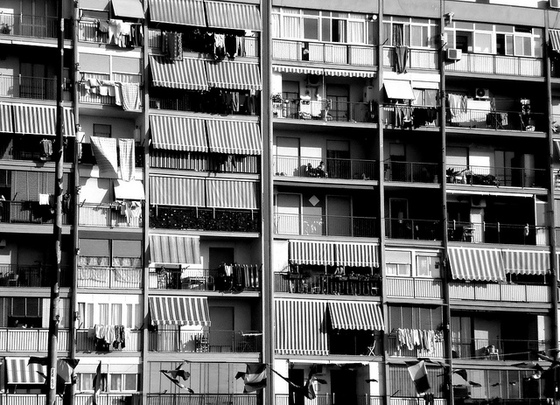 In My Brilliant Friend, the fourth and most recent novel by Elena Ferrante to be translated into English, all by Ann Goldstein, Naples provides the absorbing backdrop to the narrator-protagonist Elena Greco’s memories of childhood and adolescence. The first volume of a proposed trilogy, the novel focuses on two young girls growing up in the deprived suburbs of the southern Italian city in the late 1950s.

Ferrante, herself a native of Naples, is one of Italy’s most acclaimed contemporary writers, even as her identity remains largely shrouded in mystery. She previously explored the scenery of her birthplace in her debut novel, Troubling Love (1991; translation, 2006), which was turned into a film by the Neapolitan director Mario Martone. In that novel, urban space provided the setting for the female protagonist’s rediscovery of her childhood and a reconciliation with her late mother. In both Ferrante’s first published work and in My Brilliant Friend, there is an intimate link between the topography of the city and the characters’ search for identity. While the narrator perceives the center of Naples as “radiant, benevolent,” her suburban environment is “filled with conflicts and violence” whose only antidote is constituted by her friendship with Lila: “We were twelve years old, but we walked along the hot streets of the neighborhood, amid the dust and flies that the occasional old trucks stirred up as they passed, like two old ladies taking the measure of lives of disappointment, clinging tightly to each other.”

Fueled by the desire to transcend an existence tainted by conflict and deprivation, the friendship between Lila and the narrator-protagonist in My Brilliant Friend is forged by an escapist urge, arising from what Elena describes as an enduring sense of existential malaise: “I felt squeezed … along with the mass of everyday things and people, and I had a bad taste in my mouth, a permanent sense of nausea that exhausted me, as if everything … were grinding me up, reducing me to a repulsive cream.” On several occasions, the two girls’ involvement in episodes of raw violence brings about a fracture affecting their very perception of the external world, a kind of trauma that Lila refers to as “dissolving margins” (“smarginatura”). Amid the deafening sound of fireworks and the loud shouts of her friends at a New Year’s Eve party, she is “deeply shaken” by a sense of dissolution: “She had begun to feel horror at the cries emerging from the throats of all those who were moving about on the terrace amid the smoke, amid the explosions, as if the sound obeyed new, unknown laws.… [T]hat New Year’s Eve she had perceived for the first time unknown entities that broke down the outline of the world and demonstrated its terrifying nature.”

In the early stages of the girls’ childhood, the world of fantasy and play provides release from their sobering experience of reality: “There was something unbearable in the things, in the people, in the buildings, in the streets that, only if you reinvented it all, as in a game, became acceptable. The essential, however, was to know how to play, and she and I, only she and I, knew how to do it.” Like the protagonist in Anna Maria Ortese’s 1953 short story “Un paio di occhiali” (“A Pair of Glasses”), whose myopic vision shelters her from a traumatic encounter with the abject urban landscape, the two young girls use language and imagination, as well as their symbiotic bond, to evade a world that is far from idyllic. While it is Elena who ultimately succeeds in pursuing her ambitions, it was Lila who first taught her how to translate reality into words and bring objects to life: Lila “took the facts and in a natural way charged them with tension; she intensified reality as she reduced it to words, she injected it with energy.”

While it is Elena who ultimately succeeds in pursuing her ambitions, it was Lila who first taught her how to translate reality into words and bring objects to life.

What we are witnessing in this bildungsroman is the coming-of-age of a writer. While initially Lila appears to be the subversive figure who challenges the “logic of the neighborhood” (la logica della rione) with her androgynous appearance, keen intellect, and steely determination, it is ultimately Elena who succeeds, by accepting the responsibility of following her vocation. In fact, there is a gradual reversal of roles in more than one respect: while in the early days Lila is envied for her outstanding performance at school, she is eventually forced to abandon her education due to her family’s economic status, and at the young age of sixteen marries a local grocer. Elena, meanwhile, successfully continues her studies and feels increasingly alienated from her environment. The reversal is complete when Lila, dressed in her bridal gown, refers to Elena as her “brilliant friend” and offers to sponsor her future studies.

While Ferrante has generally displayed reluctance to align her works with any theoretical school of feminism, they have often (if somewhat belatedly) been associated by critics with second-wave feminism; her emphasis on the centrality of the female body and the tactile, olfactory, and visual dimensions of her language also evoke parallels with Irigaray’s notion of écriture feminine. In a recent interview, Ferrante underlined how, for her, the sensory immediacy conveyed by the text is an integral part of what constitutes the literary quality of writing: “anything bearing the moniker ‘literary’ has a duty to make readers see, feel, touch, smell, and taste the worlds it describes.”1 The associations with feminist thought go beyond questions of style. In line with earlier Ferrantian female protagonists, both Lila and Elena not only feel increasingly extraneous to a language inflected by violence, but also defy the rigid gender roles assigned to them in a patriarchally structured society. While Ferrante’s male characters tend to endorse and align themselves with traditional values, the two female characters of My Brilliant Friend, and Elena in particular, strive to evade the paths that have been laid out for them. As the author herself has pointed out concerning the role of women during the second half of the 20th century, “it is never the jailer who is most restless, but she who is forced to find an escape.”2