Necessary Digressions
On July 2, 2014, Recip Tayyip Erdoğan, the prime minister of the Republic of Turkey since 2003, announced his candidacy for president. With this maneuver, worryingly similar to that of Vladimir Putin ... 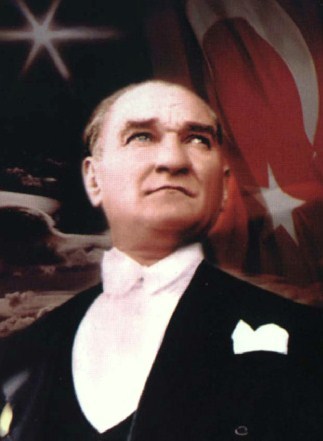 On July 2, 2014, Recip Tayyip Erdoğan, the prime minister of the Republic of Turkey since 2003, announced his candidacy for president. With this maneuver, worryingly similar to that of Vladimir Putin in Russia, Erdoğan and his Justice and Development Party (AKP) have seemingly angered as many people as they have pleased in their (some would say, dictatorial) implementation of numerous conservative religious policies. But this is not the first time in the country’s recent history that a strong leader has gone about turning Turkish society on its head.

In 1934, the Grand National Assembly of Turkey (GNAT) passed a law requiring that all Turks adopt a surname. At the time, Turkish Christians and Jews already possessed two names, but for centuries their Muslim neighbors had used a group of titles—Bey, Efendi, Hanım, and so forth—that signify one’s profession or an informal degree of respect. The mandate was the work of the Republic’s first president, Mustafa Kemal, often identified as the founder of modern Turkey. Championing notions of “progress” and “modernity” in a push to “Westernize” the country, Kemal had already issued a dense catalogue of sweeping reforms over the course of his 15-year rule. These included harsh bans on religious clothing for men and women (part of a push for secularization) and the Latinization of the Turkish language, a switch that in a mere three months erased the Perso-Arabic script and purged Turkish of Arabic and Persian loanwords. When the GNAT anointed Mustafa Kemal with the surname “Atatürk,” or “Father of the Turkish People,” it intensified the national chaos by announcing that now all Turks had a new father. The resulting situation sounds more like the stuff of myth than reality: millions of children, all of whom already have parents, acquire a second, new “father” who decrees that they can no longer speak their “mother tongue.”

It was in this climate of absurdity and confusion that Ahmet Hamdi Tanpınar (1901–62), largely overlooked in his lifetime but since come to be regarded as one of Turkey’s greatest novelists, wrote The Time Regulation Institute, his freewheeling, hilarious, and delicately crafted satire of “the age of bureaucracy.” Tanpınar’s narrative takes the form of a memoir written by Hayri İrdal, a relatively passive everyman, who three weeks before the narrative begins has suffered the loss of his mentor, Halit Ayarcı. Hayri has little positive to say for himself that is not related to his devotion to timepieces, a love that defines his life and inspires Halit, a foolhardy entrepreneur, to found the titular institute. Hayri’s horological knowledge and experience is credited to Nuri Efendi, his first teacher and “a true practitioner of the art” of watchmaking, whose maxims—“regulation is chasing down the seconds”; “the Great Almighty made man in his image, and men made watches in theirs”—become the institute’s slogans. “We’re losing half our time with unregulated clocks,” Halit asserts with a logic as flimsy as that behind Kemal taking the name “Atatürk.” “If every person loses one second per hour, we lose a total of eighteen million seconds in that hour … Now perform the calculations and see how many lifetimes suddenly slip away every year.” Not surprisingly, Halit dismisses the rather salient fact that “the perfect regulation of time is impossible.”

This is a world resting on a precarious foundation of fictions. Despite his opening statement that “I have never cared much for reading or writing,” Hayri has risen to fame by composing a comprehensive biography of Ahmet the Timely, “the eminent seventeenth-century scholar” championed by the institute, who was in fact invented by Halit during a conversation with Istanbul’s mayor. “History is at the disposal of the present,” according to Dr. Ramiz, a psychoanalyst who once absurdly prescribed dreams to Hayri in order to prove the accuracy of his diagnosis. As a result of Dr. Ramiz’s influence on him, Hayri is made to believe that we must rewrite the past because of our inability to “accept the sharp blade of the present.” That such notions are transcribed within a memoir whose own protagonist sets out to “imagine” his life, not to document it, contributes to Tanpınar’s controlled collapse of any distinction between fact and fiction. Our doubts about the truth of Hayri’s words is analogous to the state of confusion experienced by the Turks in the early days of the Republic, when their leader tried living his own fantasies as truth.

As strange and captivating as the institute and its functions may be, these are only of secondary interest to Hayri, who is more concerned with the cast of colorful characters flowing in and out of his life. These include his second wife, who sees the world through the lens of Hollywood films and believes her husband is Napoleon one day, Clark Gable the next; the institute’s typist, who spends her days knitting sweaters for the staff; and an architect whose fame grows as he creates models from matchboxes in the coffeehouse frequented by Hayri and Dr. Ramiz.

Our doubts about the truth of Hayri’s words is analogous to the state of confusion experienced by the Turks in the early days of the Republic.

While some may interpret Hayri’s lengthy descriptions of such eccentric behavior—in addition to numerous alchemical experiments and melodramatic love affairs—as “digressions,” one can read them as Tanpınar’s critique of Kemalism. Each reform passed by Atatürk was accompanied by expressions of belief in a rebirth of the Turkish people, the repetitive grandiose attempts of a “father” to establish new points of origin for the “children” he hoped to (re)cast in his image. But like the plan to synchronize Turkey’s clocks in order to create a more uniform and efficient society, these efforts were delusive. The Turks, a people with not one but many origins, already possessed a culture and a history celebrated for their rich diversity. Despite his supposed support of “modernity” and allegiance to Halit Ayarcı, the novel’s stand-in for Atatürk, Hayri cannot help but be drawn to the past that the early Republic denied, as evinced for example by his use of rejected Persian and Arabic words, an attribute unfortunately lost in translation.

Hayri’s “inefficient” repetition of life events does carry over into English, however. With every seemingly inconsequential tangent he takes, each fusion of past, present, and future into a single sentence, the narrator rejects a project of streamlined linearity and revolts against all totalizing systems that deny his, and his country’s, worldly cosmopolitan constitution.

While still greatly amusing, The Time Regulation Institute is a bittersweet read amid the tensions created by Erdoğan’s government, known for leading the world in imprisoning journalists and for enforcing a 2005 law criminalizing those who “insult the Turkish nation” (previously, “insulting Turkishness”). And it was only weeks before I wrote these words that they unleashed a police force 25,000 strong against peaceful protestors in Istanbul’s Taksim Square. These violent manifestations of national anxieties, products of a people psychically torn asunder and, as Pankaj Mishra puts it, made to “languish eternally in the waiting room of history,” stem from the same rupture as Tanpınar’s writing. “We are enslaved by our own stories,” Hayri tells Dr. Ramiz, a statement that is especially true when “our own stories” are forced upon us by others.