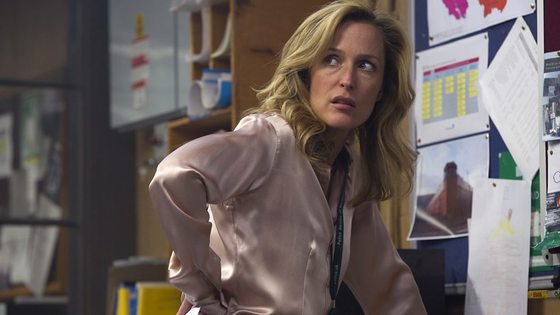 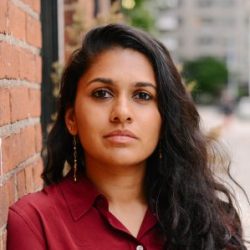 But the show’s most interesting feminist intervention comes from something else: its understanding of criminal behavior. While other critical darlings (Broadchurch, Luther, Top of the Lake, Happy Valley) traffic in blanket categories of good and evil, The Fall is a different kind of crime drama.1 Here, human behavior, even the most heinous, exists on a continuum. Despite a hyperawareness of horrific acts of torture, the show refuses to divide society into men and monsters. Instead, it reveals that men capable of monstrous acts are a product of deep-set social ills. Specifically, it suggests, they are products of a patriarchal society in which hostility, even violence, toward women is tolerated and commonplace.

The show foregrounds this social critique, in part, by eschewing the whodunit structure relied upon by so many of its counterparts. After a generic masked and gloved entrance via an unlocked window, the killer unveils himself—all before the opening credits. Without compromising suspense (scenes of the killer stalking his victims demand lights-on watching), The Fall wastes no time or energy on the mystery of the killer’s identity. Instead, it focuses on understanding both the psychology of a man capable of committing heinous acts, and the imperfect society in which he exists.

That man, Paul Spector (Jamie Dornan), is not portrayed as a lonely sociopath incapable of emotion—far from it. The show stops us from turning away from Spector in disgust not only by casting the preternaturally good-looking Dornan and inviting us to grow transfixed by his exquisite face and body; in between scenes of Spector hunting and attacking his victims, we see him lovingly kiss his sleeping children, bathe them, pack their lunches, walk them to school, take them to the park. In a moving exchange with his daughter, we listen convinced when Spector tells her, “watching you grow up has been the best thing that ever happened to me.” The Fall is so difficult to watch because we are forced to reckon with Spector as a human, capable of tenderness and remorse. The show never asks us to forgive the actions, but it implores us to understand the man.

That imploring comes, often, in the husky tones of Anderson’s Gibson. Her faultless style—those miraculously uncrushable silk shirts in every shade of blush and cream, soft shimmery eyeshadow, nude stiletto pumps, a commanding double-breasted black coat, sleek pencil skirts, perfectly blow-dried hair—helps establish Gibson as a woman to be worshipped and ruled by. Unlike her female detective counterparts who are alternately socially inept (Saga Norén of The Bridge), struggling with alcohol (Jane Tennison of Prime Suspect), given to bursts of anger (Robin Griffin of Top of the Lake), burdened by a disturbing family history (Catherine Cawood of Happy Valley), or contending with marital breakdown (Marcella of Marcella), Gibson is seemingly without personal baggage or character flaws. Some critics point to her penchant for seducing police officers as evidence of some shortcoming, but (call me wanton) I struggle to see no-strings-attached sex with attractive younger men as a failing. Early reviewers also mistook Gibson’s ability to remain clear-sighted in the face of brutality and crisis for a lack of emotion. But Gibson feels intensely—anger, frustration, fear, sadness, desire, and empathy—for the attacked women. This coupling of intellect and compassion compels viewers to trust Stella’s judgment.

With keen self-awareness the show lets various characters voice mainstream theories about men like Spector. He is, they scream, a “monster,” a “fucking aberration.” Stella, in contrast, adopts a vocabulary that foregrounds sickness and addiction. In her view, emotions exist on a spectrum and we all, like the killer, have limits to our empathy. “Men like Spector are all too human, all too understandable,” she calmly expounds. “He is not a monster, he’s just a man.” 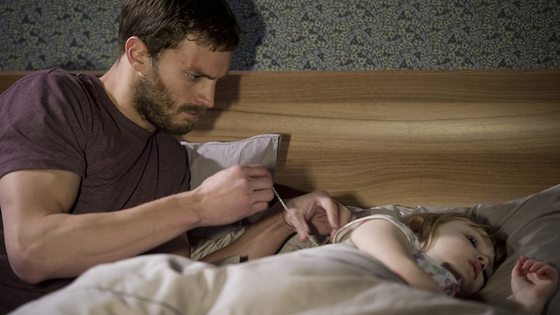 She is equally dismissive of Spector’s conviction that he is the living incarnation of Nietzsche’s Übermensch—a necessary creator of new values. In an electric sequence in the final episode of the second season (the first time Anderson and Dornan share a scene), Gibson punctuates Spector’s impassioned pontificating with measured questions about his life. She’s not interested in his farrago of philosophy; she wants to know about his childhood. Forget Nietzsche, bring on Freud.

The Fall rejects, however, that SVU brand of criminal psychology: the perfunctory “see, the abuser was abused.” The show makes clear that Spector’s childhood was horrible (a father imprisoned for murder, a mother who committed suicide, a series of awful care homes including one run by a pedophiliac priest). But Spector’s calm rejoinders to Gibson’s speculations about his childhood—her “your mother must have meant a great deal to you” is met with his “everyone’s mother meant a great deal to them”—undermine her attempts at analysis.

Instead, The Fall looks elsewhere. Again and again, it reminds us that Spector’s savagery is an extreme manifestation of a pervasive societal problem. Violence against women is everywhere on the show: a battered, grieving mother seeks refuge in a shelter; a rich businessman bloodies a prostitute’s face; a drunk superior officer makes aggressive, unwanted advances. And alongside this outwardly violent behavior, there are scenes of everyday sexism: unwanted attention at a bar, and the look of wounded male pride that follows; a graceless joke about hating women who occupy powerful positions.

At times, The Fall, anxious that viewers might miss the point, resorts to mini-lectures. We are told about a matrilineal tribe in China, about the existence of female sexual desire, about not treating wives as possessions or professional partners as damsels in distress. These are mostly delivered elegantly by intelligent women. But they do sometimes feel like a ploy to defend against the show’s Pre-Raphaelite framing of dead women, all delicate white flesh and loose luscious locks.

Less heavy-handed is the vindication that comes in the form of pathologists, police officers, lawyers, architects, DNA technicians, emergency responders, radiologists who happen to be women. The show passes the Bechdel test within the early minutes of the first episode. In a welcome reversal from the Hollywood norm, conversations between women that seem at first glance to be about men are quickly revealed to be about something else. When forensic pathologist Dr. Reed Smith (Archie Panjabi in an elegant, understated performance) asks Gibson about her sex life, the ensuing conversation isn’t about the man, or Gibson’s feelings for him. Instead, it centers on how Gibson’s failure to disclose this information earlier compromised Smith’s professional report.

The Fall unfolds as a psychological portrait of one man’s sadism. But it is also a meditation on a society in which acts of aggression against women are routine. It is grueling to watch, not only because of its graphic sexual violence, but because it demands we recognize that such violence is unexceptional.