On Christopher Street Pier
This month, Public Books mourns the loss of the writer, teacher, and editor Ellis Avery to leiomyosarcoma, a rare uterine cancer. Ellis’s essay about a beloved ... 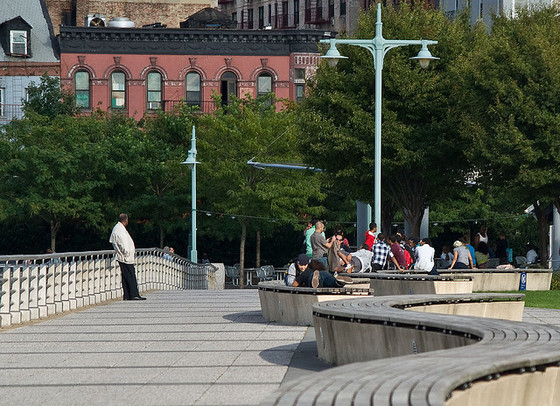 This month, Public Books mourns the loss of the writer, teacher, and editor Ellis Avery to leiomyosarcoma, a rare soft tissue cancer. Ellis’s essay about a beloved West Village haunt was the inaugural entry in Public Streets, the series of urban observations she founded in 2014 and edited until 2017. As she first described the series to me in an email, her goal was to feature pieces in the “flâneurial spirit … more about what writers observed and less about what they discovered about themselves along the way.”

Public Streets was just one manifestation of Ellis’s faith in the power of attentive observation, and of her interest in the experience of place. She was the author of two award-winning novels, The Teahouse Fire (2006) and The Last Nude (2012)—books that made 19th-century Japan and Jazz Age Paris, respectively, come alive—as well as two memoirs, The Smoke Week (2003) and The Family Tooth (2014). For many years, Ellis devoted herself to the practice of writing a daily haiku. Some of these intimate, observational poems were published in Broken Rooms (2014), alongside photographs of the sculpture of William Corwin, while others appeared in the form of annual datebooks.

All of Ellis’s writing registers her determination to find beauty and meaning in the particular, the contingent, and the everyday, a determination she passed on to countless others in her capacity as a creative writing teacher at the University of California, Berkeley, and Columbia University, where I was fortunate to be her student. It is with gratitude as well as grief that I reflect on the beautiful words she wrote, on the generous guidance she gave, and on the urgency with which she showed me, and so many readers of Public Streets over the years, how to look at the places we inhabit and really see them.

Not far from these artifacts of old New York stand the work of another Meier: three new glass towers line the river, one of them home to Perry Street, the westernmost arm of chef Jean-Georges Vongerichten’s New York City empire. (The restaurant closed for four months due to damage from Hurricane Sandy, when flood waters rose all the way to Washington Street.) Looming still newer over the tiny Weehawken Street Historic District stands 150 Charles, the 15-story Witkoff Group tower-in-progress, a steel frame dominated by a yellow crane. Linking old and new is Rockbar, a nightclub advertising a RuPaul drag night and a Bear Meat dance party: you can hear the Wild Cherry pumping as you pass by.

On the first warm evening of 2014, the pier, for months the sole province of intrepid joggers, dog-walkers, and German tourists, suddenly came to life. Under the bare elms closest to the Port-a-Potties, a young trans woman with a boom box played “Rapper’s Delight” for one cluster of friends, while on the short dead grass enclosed by the boardwalk, a young shirtless man with a guitar played “Wonderwall” for another. Two men in black ponytails approached two beauties, each with a magnificent head of curls: one pink, one green. An elderly Asian American woman slumbered in the sun.

Toward the far end of the pier stood the white canvas canopy that in summer months offers shade to a sunset tango class. Up in the canopy, some 12 feet overhead, a human figure swung one-handed from strut to strut like Tarzan, a dark cutout swooping against the evening sky. “Hey, Spidey,” I said aloud. 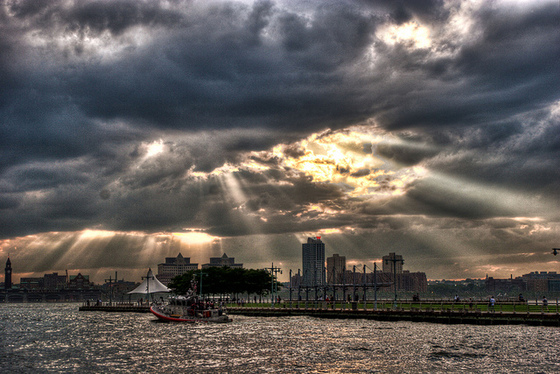 At the end of the pier, the old ferry building across the river squatted as it had for decades, still bearing its legend: LACKAWANNA. A man fished, dwarfed by the glass towers of Jersey City. As if waving at the Verrazzano Bridge, the Statue of Liberty brandished a bare arm, as did a tall African American woman tickling her short white boyfriend nearby. Two women looked south toward Lower Manhattan. “If they’re finished with the Freedom Tower,” one asked, “why does it still look like it’s got scaffolding up one side?” The water taxi roared by, churning the river into foam.

Turning my back on the Hudson, I approached the canopy—and its arachnid daredevil—once again. Except this time, the boy wasn’t backlit, so I recognized him. This time, I spotted it, lying on the boardwalk beneath him: the unicycle.

An earlier version of this article incorrectly referred to leiomyosarcoma as specifically a uterine cancer.