On Frantz Fanon: An Interview With Lewis R. Gordon
This article was originally published by The African American Intellectual History Society (AAIHS), and is reprinted here with permission.   Lewis R. Gordon is Professor of Philosophy and ... 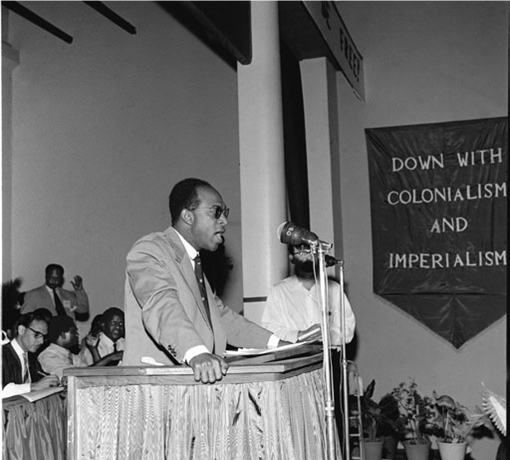 Lewis R. Gordon is Professor of Philosophy and Africana Studies at UCONN-Storrs; Visiting Professor of Philosophy and Government at the University of the West Indies at Mona, Jamaica; European Union Visiting Chair in Philosophy at Université Toulouse Jean Jaurès, France; and Writer-in-Residence at Birkbeck School of Law at the University of London. He recently was also Nelson Mandela Visiting Professor of Politics and International Studies at Rhodes University in South Africa. He is the author of several influential monographs, including Bad Faith and Antiblack Racism (1995 and 1999); Fanon and the Crisis of European Man (1995); Her Majesty’s Other Children: Sketches of Racism from a Neocolonial Age (1997), which won the Gustavus Meyer Award for Human Rights in North America; Existentia Africana (2000); Disciplinary Decadence (2006); An Introduction to Africana Philosophy (2008); and more than two hundred articles, many of which have been translated into several languages, and interviews and essays for a variety of public forums, including Truthout.org, on which he now serves on the Board of Directors.

Brooks Kirchgassner interviewed Professor Gordon earlier this year about his latest book, What Fanon Said: A Philosophical Introduction to His Life and Thought.

Brooks Kirchgassner (BK): Describe the time in your life when you first read Frantz Fanon. What were your initial impressions of his writings and why is Fanon still important for your own work today?

Lewis R. Gordon (LG): I first attempted to read Fanon when I was about thirteen years of age. My uncle, Shaleem Solomon, is a Rastafarian. He had a collection of books on Black Liberation, which included writings by Almicar Cabral, Frantz Fanon, and Kwame Nkrumah. I found Fanon’s prose gripping, but I didn’t yet know about the thinkers to whom he was referring and the contexts of his discussion beyond the clear ones of colonialism and racism. Those ideas stayed in the back of my mind, however, as I soon after, at fourteen, read works by Malcolm X, James Baldwin, and Angela Davis, with additions of G.W.F. Hegel and Karl Marx. When I read Jean-Jacques Rousseau during my years at Lehman College, I kept hearing the voice of Fanon. I was delighted to see Les Damnés de la terre (“The Damned of the Earth,” more popularly known as “The Wretched of the Earth”) in M. Shawn Copeland’s graduate seminar on Political Theology when I was a doctoral student at Yale, and the supervisor of my dissertation, the late Professor Maurice Natanson, was very enthusiastic about his inclusion in the thesis. Fanon became a constant presence in my work because he addressed human affairs, particularly those pertaining to Black people, with a heavy dose of something often unfashionable in the academy: reality.

BK: How did you settle on the title of the book, What Fanon Said? What message were you trying to convey to readers?

LG: Fanon is often accused of saying things he simply did not say or write. Some of them emerged from terrible translations of the original French. Others are from a lack of understanding of the contexts of his arguments, which raised the question of the meaning of his statements. But there is more. I wrote a book called An Introduction to Africana Philosophy, in which I explored, among many things, the problem of articulating Black intellectual history in a world that tends to de-intellectualize Black intellectual work. That book examined a vast array of writings on ideas posed by an African Diaspora. This book brings that task to the study of a specific Black intellectual with a critique of the prevailing tendencies of subordinating thought to biography. Implicit in what Fanon said is also what he thought, and I wanted to bring that dimension of his work to the fore.

BK: In your opinion, what aspect of Fanon’s thought is the most misinterpreted or misunderstood?

LG: Much of his thought is misunderstood, but two aspects that are egregiously so are his reflections on violence and what many critics perceive to be his ideas about interracial relationships. In terms of the first, many fail to see that Fanon hated violence. His point was that it was impossible to attempt to reduce or eliminate it without entanglement. The situation was tragic: Doing nothing about violence facilitates its persistence.

In the USA and the UK, large crowds show up to book sessions and workshops on Fanon’s work for obvious reasons: his ideas speak to current struggles.

In terms of the second, Fanon wasn’t against interracial relationships, and his discussion wasn’t about the woman of color and the man of color. It was a critique of specific pathologies made manifest by colonialism and racism and the limitations they pose for dominating views of the human sciences, particularly Lacanian psychoanalysis. These pathologies took the form of seeking legitimation and recognition from a specific source. In classical and Lacanian psychoanalysis, women became such through seeking the love, and by extension approval, of a man. The man became what he is through being able to give his love to a woman. This heteronormative model was advanced as how or what human beings are, and it made sex and gender primary or ontologically basic—that is, absolute. Fanon showed, however, examples of women of color who didn’t want love but instead a form of lie in which a white man would, in his relationship with them, facilitate something they wanted to believe: that they were not really black. This at first would appear as the old order of seeking male approval, but the problem here is that a black man cannot offer this. In fact, it works if the white man who does so also hates black people—is, in other words, a racist. His “love,” then, cannot be premised on anything other than such women supposedly not being black.

Fanon, however, turns to the case of a black man who is also seeking legitimation through receiving testimony against his being black. What many critics miss is that the heteronormative schema falls apart. Although the white woman in the example offers her love, her beloved rejects her and manipulates the reception of a letter from a white man who ultimately informs her black beloved that he is not really black but is instead—and get this—“extremely brown.” In effect, then, this pathological search for escape through recognition challenges any view that makes sex and gender the exclusive conditions for psychoanalysis: Both the black woman and black man in the examples seek recognition from the same source—the white man. This could only be accounted for through looking at the impact of social and political conditions on psychological reality. Colonialism and racism, he averred, always bring in the socio-historical factors that contradict prevailing models of patriarchy and gender-based subjectivity. Fanon’s discussion thus raises questions such as how whiteness functions in relation to gender under colonialism and racism, which means other questions could emerge—such as how these concerns would play out in same-sex relations. I elaborate other considerations in What Fanon Said and I’ve also discussed these matters and their relationship to concerns of power and politics in other articles and books.

BK: One of the many reasons your book is an essential resource for beginners and advanced students in Fanon studies is that you translate Fanon’s writings using the original French texts. What is the significance of this approach? How does the use of the original French texts enhance our understanding of Fanon and/or alter commonly held perceptions of Fanon’s ideas?

LG: I aimed through my translations to bring clarity to what Fanon was arguing and also to address some unfortunate claims about the man and his thought. For instance, the semiological argument he was making in some places required using the expression “the black” or “the Black” instead of “the black man.” In some crucial passages, he distinguishes pederasty (sleeping with minors) from homosexuality. He argued the former was abnormal but the latter was normal. Yet, critics accused him of being a homophobe because one translation simply placed “homosexual” for both. There are many other examples. I also chose not to translate some words so readers could interpret the ambiguities on their own. Thus, I simply write le nègre without translation since it has a double meaning in French; in addition to describing color it also connotes the equivalent of the very pejorative “n” word in English.

BK: Your analysis of Fanon and the blues illuminates what you call his “Euromodernist predilections.” Could you elaborate on this point and also describe what led you to focus on this topic?

LG: I love and respect Fanon. For me, that means not idolizing him. Thus, I state my disagreements with his positions here and there, as I would in a study of any intellectual to whose work I devote serious study. Fanon, influenced by the surrealists via the Négritude movement, privileged written poetry and looked down at Black popular music, especially the blues. The importance of music extends well beyond its performance. I argue that the blues is also existential and offers a sense of mature reflection that enabled it to be the leitmotif of modern life. Interestingly enough, Fanon admired be-bop because of its sophistication and the extent to which it irritated white critics who were, in the end, afraid of Black genius.

BK: How would you summarize the significance of Fanon’s ideas for a new generation of black activists engaged in the continued struggles for black equality in the United States and across the globe?

LG: Many activists have been using Fanon’s name and his words in struggles across the world. He, along with Steve Bantu Biko, is the voice of struggles in South Africa; he is so across disenfranchised and alienated peoples of Asia, Europe—everywhere. In the USA and the UK, large crowds show up to book sessions and workshops on his work for obvious reasons: his ideas speak to current struggles. Rather poignantly, it was he who said, in Year V of the Algerian Revolution, that revolution is “the oxygen that invents the new humanity.” Eric Garner’s last words, “I can’t breathe,” became metonymic as a reminder of so many who are taking to the streets because of threatened or impending asphyxiation. Fanon also offers a persistent, devastating critique of liberal political philosophy in an age of colonialism: It collapses into a moralism that impedes political action. Black liberation, as a call for the liberation of humankind because of the interconnectedness, the relationality, of human reality, demands transcending that impasse. That speaks to activists.

What Fanon Said: A Philosophical Introduction to His Life and Thought