On Pansodan Road: The Second-Hand Books of Yangon
This is the latest installment of Public Streets, a biweekly urban observations series curated by Ellis Avery. Some names in this piece have been changed to protect privacy. It’s a Sunday morning ... 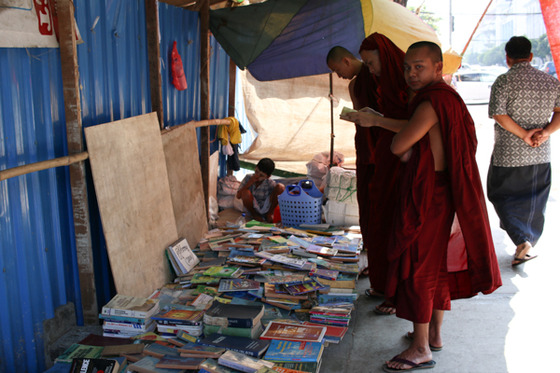 This is the latest installment of Public Streets, a biweekly urban observations series curated by Ellis Avery. Some names in this piece have been changed to protect privacy.

It’s a Sunday morning, and the light first falls on the squatters who have built their homes on the roof of the colonial telegraph building, an edifice that has been falling into beautiful disrepair since the British built it in 1911. The morning breeze, which is about as refreshing as a hair dryer blowing in your face, brings with it faint chants from the Hindu temple and the call to prayer from the nearby mosque. The eye catches the outline of a Baptist church tower in the distance. Below, on Pansodan Road, the booksellers are setting up shop, piling up hundred-year-old copies of Plato’s Phaedrus on the concrete slabs that lie scattered like puzzle pieces across the open sewers.

Much is made of the fact that George Orwell walked these streets not long ago. His favorite bookstore, Smart and Muckerdom, was just around the corner, on Sule Pagoda Road. Lesser known is the fact that Pablo Neruda also spent some time here. In 1927 he wrote, “I came late to Rangoon. Everything was already there.” It’s funny how often you’ll hear that same sentiment expressed today, carrying with it the underlying belief that there was something majestic about this place that’s only just disappeared. 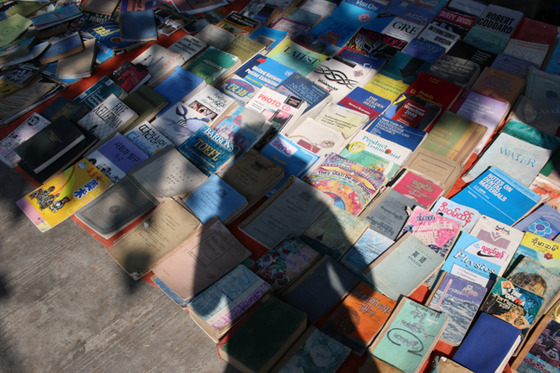 Indeed, many would have you believe that this is a new Yangon, that the stores peddling iPhones and flat screens are the beginning of an awakening Myanmar. Rangoon’s old jigsaw sidewalks are being replaced by wide sprawls of level pavement for a new Yangon to stand on. Still, even if the old sidewalks go and the colonial buildings crumble, sending street sellers fleeing to make room for more parking, the books will never let this country’s history slip away.

If you want to learn what happened here, go to Pansodan Road, where all the city’s used books end up. They arrive each morning in massive rice sacks. A visit to a single stall will reveal copies of Sputnik collected and cared for by a Soviet sympathizer somewhere, decrepit volumes on North Korea’s Juche ideology, propaganda trumpeting the wonders of America, and a copy of Training for War, a British publication with explicit instructions to not share this document with the press on its first page. Propped side by side, the day’s spoils make it possible to get a sense for all the players who have had a stake in what happens on these streets for the past hundred years. 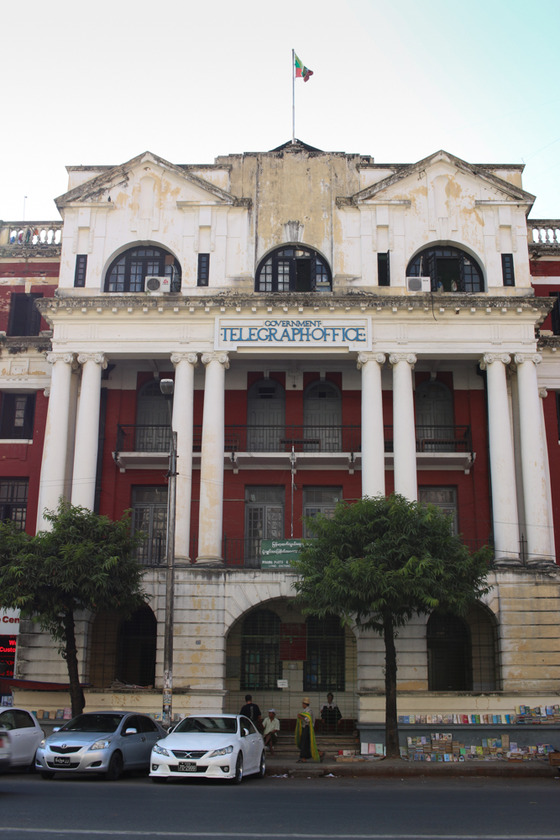 Add to them the leaflets, books, and newspapers extolling the views of Burma’s own military, the Tatmatdaw. Find hundreds of justifications for people who were disappeared; see photos of students incarcerated for handing out leaflets. Read about Ko Ko Lay, imprisoned at 23 when an anti-government pamphlet was found in his diary, and the world becomes cynical. He was a monk at the time, much like Kyaw Win Naing, whose official arrest at 36 occurred because “security unit members became suspicious.” After page after page of doctors and lawyers, students and monks, you find a propaganda volume that’s been turned into a photo album with the help of some butterfly stickers—by someone in hiding? If only these books could talk. This sentiment, too, is common here.

A friend most recently felt it when he picked up a secondhand collection of eighth century verses by Du Fu, only to find, hidden between the poems, a movie ticket from the 70s, a pair of five-kyat notes, and a sheet of paper with the penciled outlines of two hands, one large, one small: one male, one female? A poem inside a poem: there must be a word somewhere in some language to describe moments like these.