Once More Down the Rabbit Hole
By all means, celebrate the recent 150th anniversary of the publication of Lewis Carroll’s fantasy classic Alice’s Adventures in Wonderland by rereading or finally reading the novel and its sequel ... 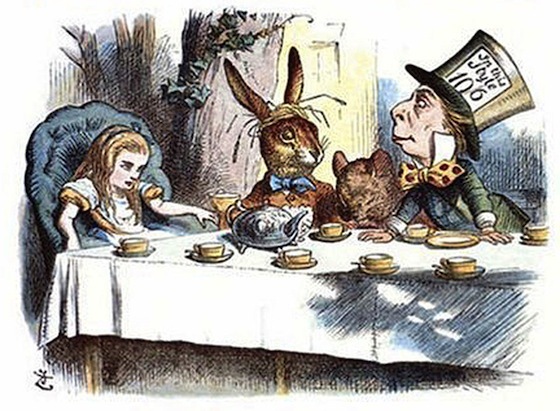 By all means, celebrate the recent 150th anniversary of the publication of Lewis Carroll’s fantasy classic Alice’s Adventures in Wonderland by rereading or finally reading the novel and its sequel, Through the Looking Glass (1872). But do also mark the occasion by picking up Gregory Maguire’s new novel After Alice, a distinctly 21st-century homage to Carroll’s delightfully bizarre creation. Maguire has made a career of retelling beloved stories for children and adults, from “Cinderella” and “Snow White” to The Wizard of Oz, which he reimagined in his popular debut adult novel Wicked (1995), which in turn spurred a hit Broadway musical.

Maguire’s latest novel takes place “after Alice” (the fictional Alice, not the Alice Liddell of Carroll’s acquaintance who inspired her) in two ways: it imagines the actions of the heroine’s family and friends in 1862 Oxford during the hours after her disappearance (Alice herself does not feature until the final pages), and it sends a new heroine through Wonderland—Alice’s 10-year-old friend Ada Boyce, briefly mentioned in Alice’s Adventures in Wonderland. Maguire’s Ada wears an iron corset to compensate for a spine problem and is generally less adventurous than her friend. But after she tumbles down the rabbit hole too and sets off in pursuit of Alice—finding along the way that in Wonderland she can move just fine without her iron brace—she begins to enjoy the adventures for their own sake.

The result is a delightful remake of Alice’s journeys in Wonderland, with Carroll’s absurdity finding a perfect match in Maguire’s clever exuberance. Ada meets the talking flowers, Cheshire Cat, hookah-smoking Caterpillar, and other familiar characters in one enjoyable sequence after another; Maguire’s version of the Mad Tea Party, in particular, is every bit as good as Carroll’s. Maguire winks at John Tenniel’s original illustrations for the Alice books when the March Hare, in response to Ada’s inquiry, says that they most surely had seen Alice—“With that alarming forehead. You could hardly miss her. It was like having Gibraltar to tea.” An extended play on different meanings of “steal” ends with the Mad Hatter commenting as Ada walks away that she “has stolen the Stollen.”

The chief pleasure of reading this novel is entering Wonderland again, with a very capable guide. But as much as he enjoys his wordplay, Maguire is more serious than Carroll. Ada’s adventures in Wonderland constitute only one part of the novel. The other, told chiefly from the perspective of Alice’s moody 15-year-old sister, Lydia, takes up Victorian attitudes to evolution and race. The novel implicitly raises the question of which is more difficult to navigate, Wonderland or Victorian England. Unlike Carroll, who barely mentions Alice’s parents at all, Maguire tells us that her mother has recently died. Lydia is in no humor to be dealing with her truant sister or her father’s unusual array of visitors: Charles Darwin (three years after the controversial publication of Origin of Species), a handsome young American named Josiah Winter, and Mr. Winter’s ward, an escaped slave boy named Siam. Alice’s father is presented as a deeply disappointed man trying to hold on to religion, an old friend of Darwin’s who “worries over the scandalous notion of natural selection with appalled fascination.”

Lydia takes an immediate fancy to Mr. Winter, but monopolizing him also means interacting with Siam, the first black person of any age Lydia has ever seen. She has only the faintest idea of what is being disputed in the American Civil War raging on the other side of the Atlantic, and she treats Siam with disturbing callousness. In a moment of irritation about something else, she sees him holding a chess piece belonging to his hosts and remarks that he could be deported and sold back into slavery as punishment for thievery; Siam, who has no choice but to take her seriously, seizes his next opportunity to escape. When one of his hiding places turns out to be another entrance, he finds himself tumbling into Wonderland. Ada treats him kindly from the moment they meet near the Caterpillar’s mushroom. But although she offers to take him back to England along with Alice, Siam chooses to remain in Wonderland. And you can’t blame him. Maguire wisely narrates a few passages from Siam’s perspective—the perspective of a boy for whom the baffling conversations and summary executions of the Red Queen are a vast improvement over the life he was born into. Wonderland offers Siam sanctuary from an intolerant world, just as it provides Ada with a respite from the iron corset.

Maguire’s new novel implicitly raises the question of which is more difficult to navigate, Wonderland or Victorian England.

After Alice, it nevertheless must be said, can’t hold a candle to Wicked. Both Wicked and the fourth book in the Wicked Years series, Out of Oz (2011), featured heroines who leapt off the page; neither Ada nor Lydia is as vividly drawn. After Alice more closely resembles the middle two books of the Wicked series, Son of a Witch (2005) and A Lion Among Men (2008), which offered interesting situations but relatively weak characters. Like Oz, Wonderland is a fascinating place with a well-deserved hold on Anglo-American cultural consciousness. Maguire’s consistent strength is in richly recreating such settings. His fairy-tale novels—Confessions of an Ugly Stepsister (1999) and Mirror Mirror (2003), versions of “Cinderella” and “Snow White,” respectively—showcased the creativity that is in more limited supply in After Alice; in both he retained only the skeleton of the originals and successfully built new worlds around them.

Relative to Maguire’s oeuvre, this novel is merely average. But “average” is nothing to sneeze at for a writer who set his own bar so high with his first novel for adults. After Alice is a welcome contribution to the ever-growing body of novels that retell traditional fairy tales, myths, and other fantastical stories. The value of those retellings lies in their variety: fairy tales are a protean form that can and should be adapted to all manner of settings, perspectives, and genres. In 2014, for example, Helen Oyeyemi published Boy, Snow, Bird, a beautiful novel that is equal parts a psychologically nuanced retelling of “Snow White” and a poignant account of the ramifications of “passing” in mid-century America. Salman Rushdie’s Two Years Eight Months and Twenty-Eight Nights, published this past September, revives the genii of The Thousand and One Nights and portrays them as superheroes, even as it also tells a story of nostalgia and exile. Also last fall, Michael Cunningham released a new collection called A Wild Swan, opening up 10 traditional literary fairy tales (mostly from the 19th-century collections of Hans Christian Andersen and the Brothers Grimm) in 10 new ways.

In fact, fairy tales have always been more multifaceted than most casual readers know; the versions published for children over the course of the 19th century were flattened-out renditions of more various, more graphic, and often less sexist tales told all over Europe for generations. Yes, even the grotesqueries of the Brothers Grimm are tamer than the stories that preceded them. Lewis Carroll’s Alice books, instead of retelling particular fairy tales, revived the old fairy-tale experience of wonder and limitless possibility. One reviewer in 1865 declared, “a more original fairy tale—and original fairy tales are by no means common now-a-days—it has not lately been our good fortune to read.”1 During an era in which many fairy tales were thinly veiled moral instruction manuals, Carroll’s books offered an escape to pure pleasure. Maguire’s Ada Boyce, wriggling out of her iron corset and falling freely into Wonderland, literalizes the Victorian experience of reading the original novel. This detail—presenting a vivid new image while remaining entirely faithful to the spirit of the original—echoes the best moments of Maguire’s retellings. We think we know Wonderland and Oz inside out, but Maguire has explored byways no one else has; so it is that his recastings are at once so familiar and so fresh.