One Border, Two Walls: Douglas, Arizona, and Agua Prieta, Sonora
The sun is setting behind the Tohono O’odham Nation Reservation, and ... 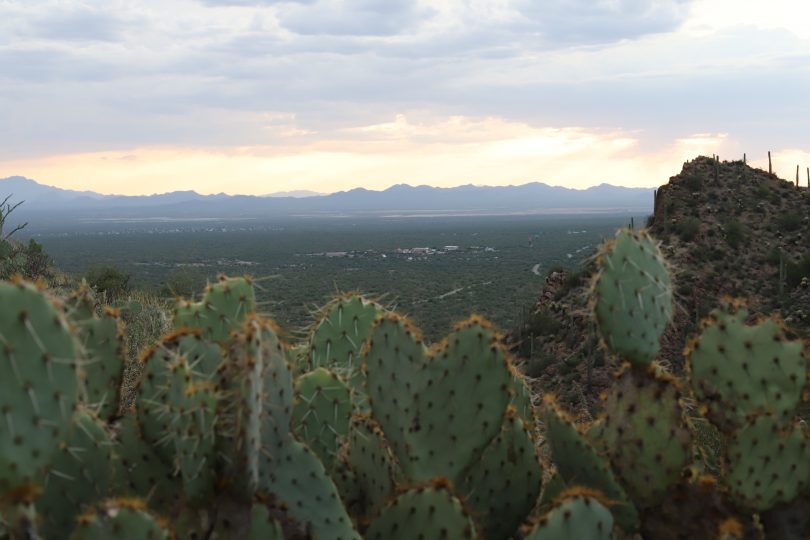 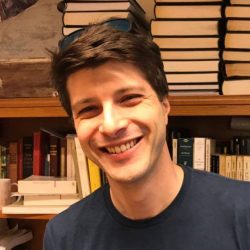 The sun is setting behind the Tohono O’odham Nation Reservation, and Gates Pass feels like paradise. It’s early September, and a subtle breeze brushes over the bushes and sweeps across the sand. Facing the sunset, we can see the desert. Only a lonely road and Old Tucson, an old-West-styled amusement park, reveal any human presence in this part of the country, which naturally blends together with northern Mexico. It’s a moment of relief, coming after a week in which we have witnessed how human intervention in the land results in dramatic, deadly consequences.

I spent a week in Tucson, Arizona, as a guest of BorderLinks.1 An organization that hosts delegations at the border, BorderLinks connects visitors with people who, in various ways, work to mitigate the challenges of migratory phenomena.

On the third day of our stay, our guide Josh drives us to the border between Douglas, Arizona, and Agua Prieta, Sonora. It’s a hot Sunday morning in Douglas; there is not a single soul around. We meet with Joca, a volunteer for the association Frontera de Cristo, who will join us for our 24 hours in Agua Prieta. After visiting with Joca, we will leave town to proceed toward the border in the desert. 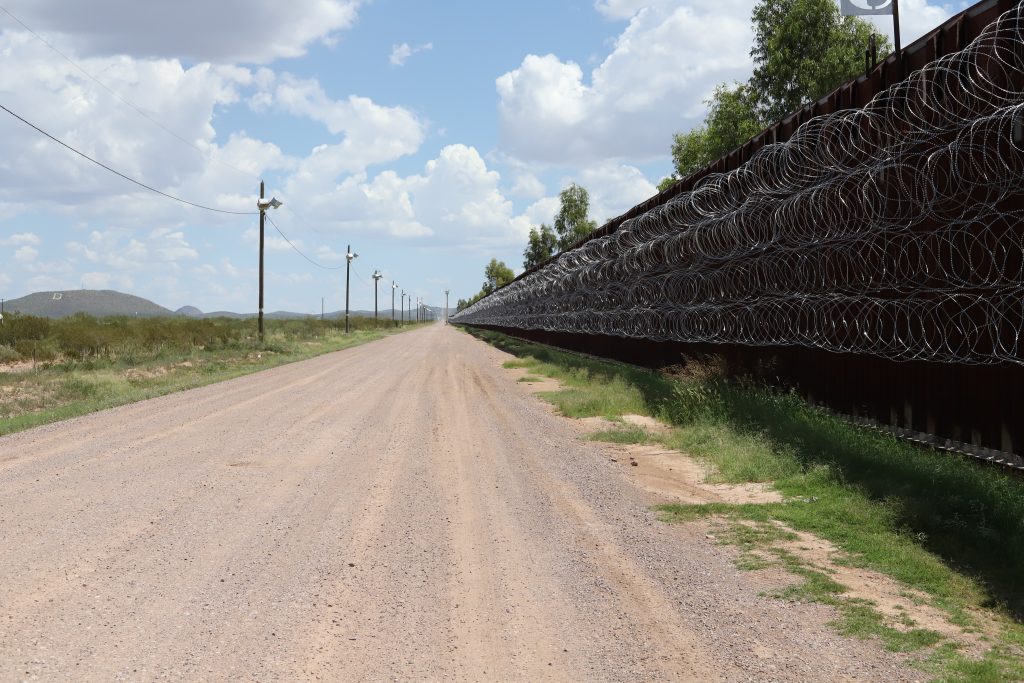 Still in Douglas, Josh drives through a few deserted residential neighborhoods, as well as a gigantic town mall, until we arrive at the border wall. It is almost high noon. Border patrol cars are stationed at regular intervals from one another, their engines running to supply air conditioning.

In 1994, NAFTA changed everything. Joca tells us that before there had been a simple fence that was easy to trespass. Border patrol officers would simply warn her and other kids to be back by the end of the day. Now, looming in front of us, we see the 20-foot-tall iron border fence fortified by four rows of barbed wire. They are the result of four different administrations, each of which has contributed to reinforcing this human-made barrier. Most recently, the Trump administration has promised 60 new miles of walled fence, and, in this part of Arizona, 10 feet of additional height.

Through the gaps between the iron bars we can glimpse Mexico: specifically, the town of Agua Prieta. Beyond the sidewalk and the street, we notice—in contrast to the sense of abandonment on the American side—the liveliness of the Mexican morning.

On our side, there is no paved road. A wide strip of yellow sandy soil separates the wall from the desert, which stretches toward the city of Douglas and looks interminable. A few scattered cows graze in the middle of the road, forcing Josh to slow down and wait for them to move before we can continue.

As Josh drives us farther away from the urban area, the rows of barbed wire diminish, until only one remains, right below the top of the fence. After a 10-minute drive, the car arrives at a fork and we stop. Here, the wall ends, and it is substituted by a barbed-wire yard fence reinforced with metal beams, each measuring about three feet tall. 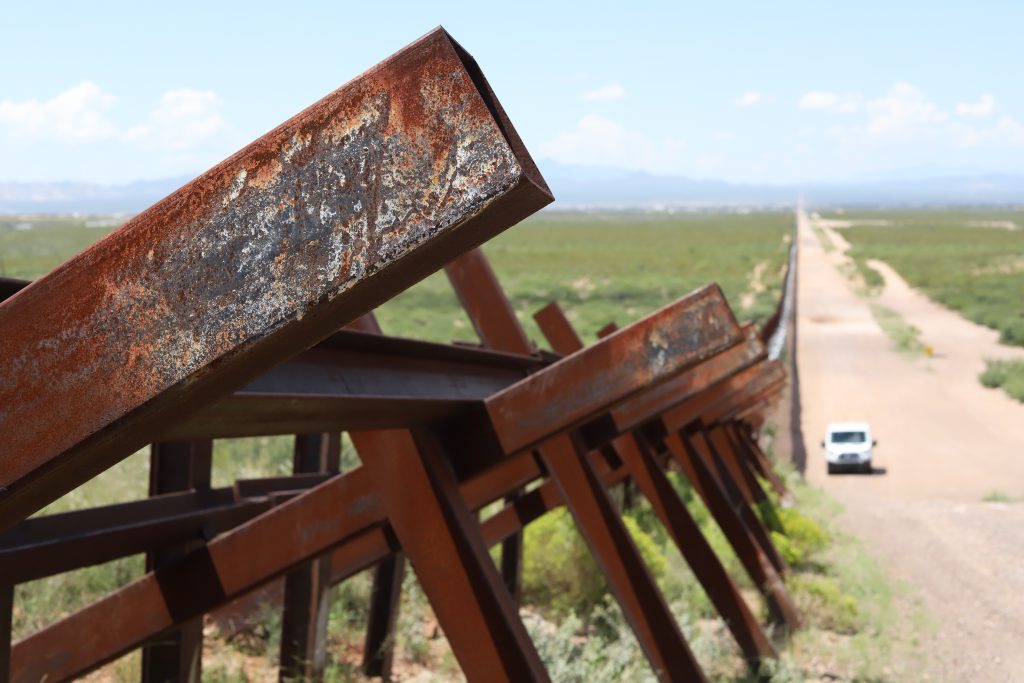 We get out of the van. Outside, the silence is astonishing. The heat is bearable only for someone who has spent the last few hours inside an air-conditioned vehicle. There is a narrow path that climbs up along a hill.

A few yards away, an officer waves at us from inside a parked border patrol car.

All around us is the desert. From here, it looks like it has swallowed Douglas. Joca tells us that it is the desert that kills those who cross here. The heat, the lack of shelter from the sun, the impossibility of orienting oneself, the abundance of animals—none of these obstacles deter people escaping from something much worse.

Once back in the van, Josh returns to the port of entry. We proceed into Agua Prieta. 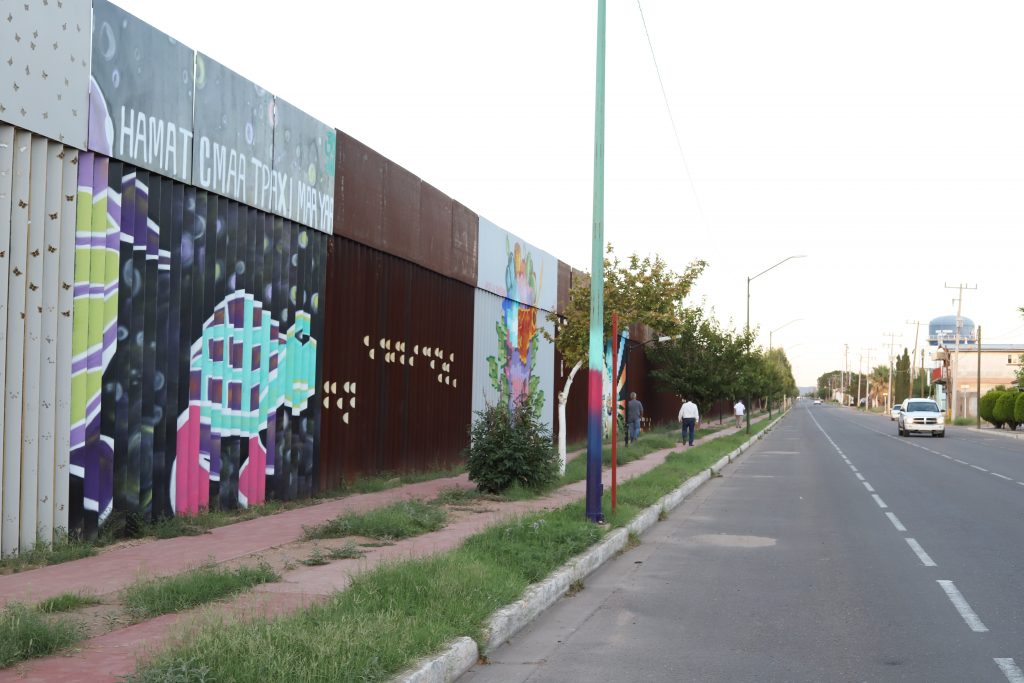 One block separates customs from The Arch, the architectural passageway into Agua Prieta. Here, locals and tourists leave their cars and populate the streets. The vitality of the city regalvanizes us. After lunch with a group of volunteers from DouglaPrieta Works, we go back to the fence to see it from the Mexican side. A sidewalk with lawns and exercise equipment runs along the wall, gigantic murals coloring its dull metallic brown. People stroll beside the artificial separation of what would otherwise be a big Mexican-American city.

The contrast between the landscapes on the two sides of the wall now stands out as incredibly striking. While outside of Douglas the wall was erected in a deserted area, minutes away from the first inhabited neighborhoods, in Agua Prieta it interrupts the city. It is as if someone forced the Mexican urban center to halt its expansion northward.

The following morning, we visit the Centro de Recursos para Migrantes, a brand-new building located just a two-minute walk from the port of entry. The center, which has been supported by the local authorities since 2016, welcomes immigrants deported from the United States and coordinates the entry of asylum petitioners.

Joca takes us to meet some of those who are waiting in line. They are staying in a six-by-twenty camping tent, right next to the pedestrian gate that leads into the United States. On one side is the beginning of the wall, which continues toward the desert; on the other side, cars slow down to clear customs, creating an incessant, unbearable noise in addition to the unbreathable air. Within the makeshift interior are 18 people and one electric fan, plugged in with some artistry to the lamp post on the opposite side of the street.

A few days later, the tranquil sunset on Gates Pass will take my mind back to the noisy barrier between Douglas and Agua Prieta: the confusion, the waiting time, the questionable functionality paralleled by the aesthetic ugliness. There, a 20-foot-tall iron fence separates two communities, two cities, and two countries with no apparent success. Here, out in the desert, Mexico and the United States naturally meld into one another.

The harshness of the desert has never stopped those who want—or have—to cross it. Can a wall do so?