Organic Machines
Matthew Barney and Edward Burtynsky are two contemporary artists not typically discussed in the same sentence. Barney is a provocateur known largely for his elaborately staged films filled with ... 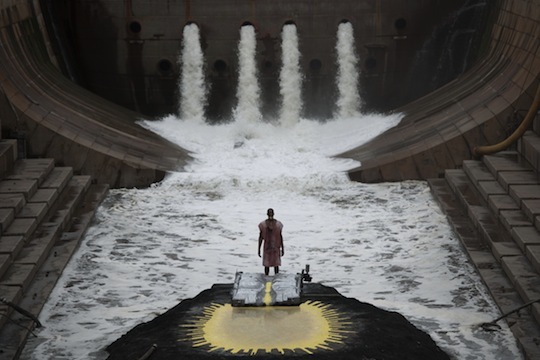 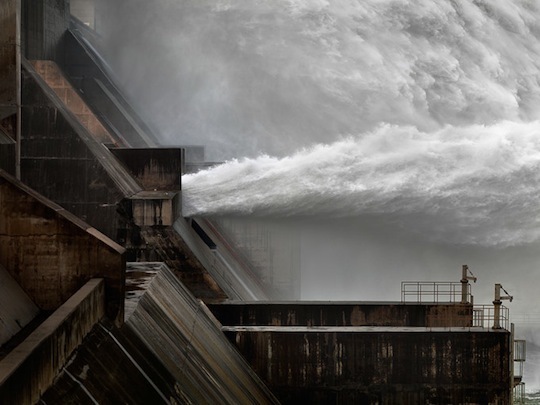 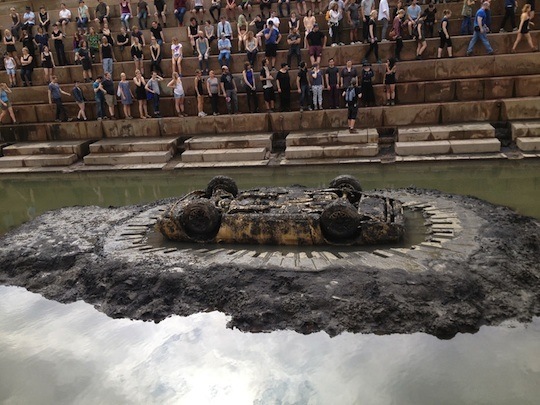 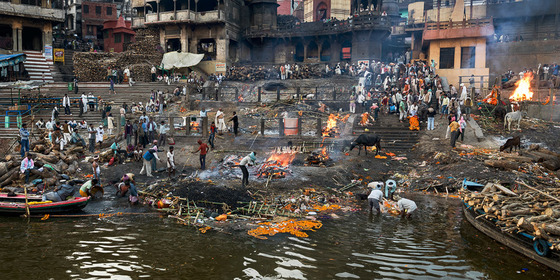 A photograph from Burtynsky’s Water series, showing the Manikarnika Ghat, where deceased Hindus are cremated on the banks of the Ganges River. Edward Burtynksy Water: Manikarnika Ghat, Varanasi, India (2013). Courtesy of EdwardBurtynsky.com 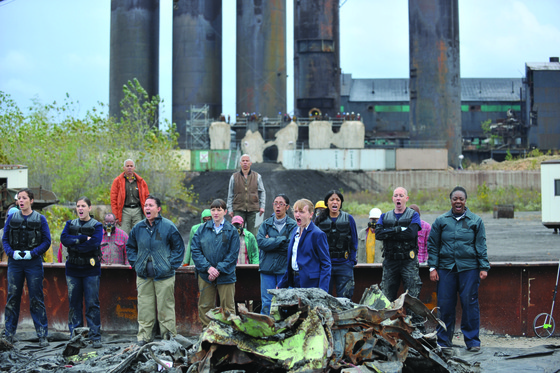 Act II of River of Fundament, set in Detroit, focuses on multiple automotive incarnations of the Egyptian god Osiris. A Chrysler Imperial is resurrected from the Detroit River. Matthew Barney and Jonathan Bepler, River of Fundament (2014). Production still. Photograph by Hugo Glendinning. Courtesy of BAM 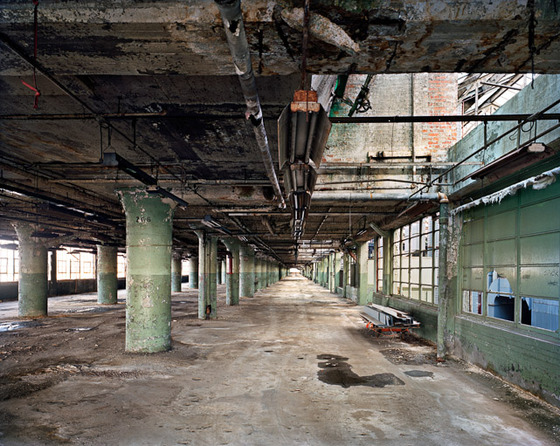 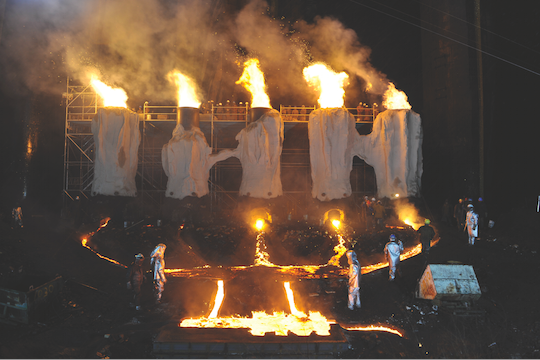 During the conclusion of Act II of The River of Fundament, “the molten body of Osiris is resurrected as a massive iron Djed pillar.” Matthew Barney and Jonathan Bepler, River of Fundament (2014). Production still. Photograph by Hugo Glendinning. Courtesy of BAM 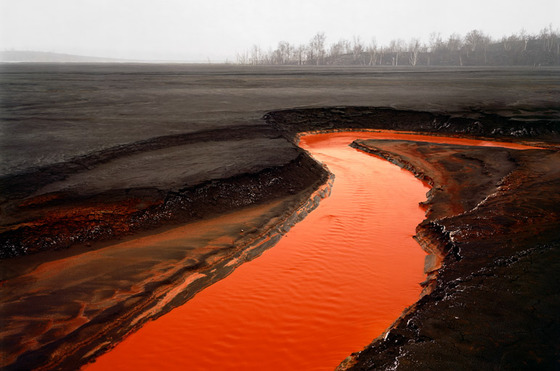 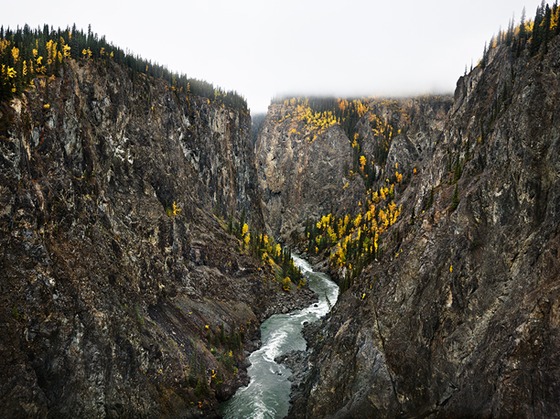 River of Fundament begins and ends with a shot of the Columbia River. Burtynsky’s Watermark also concludes on a river in the Pacific Northwest. Edward Burtynsky, Stikine River, Northern British Columbia, Canada, (2012). Courtesy of EdwardBurtynsky.com

Matthew Barney and Edward Burtynsky are two contemporary artists not typically discussed in the same sentence. Barney is a provocateur known largely for his elaborately staged films filled with outlandish costumes and graphic imagery. Burtynsky is a large-format photographer known for his epic depictions of anthropogenic landscapes like dams, factories, and shipbreaking yards. While Barney’s work often defies classification, Burtynsky is the de facto standard bearer for an increasingly common aesthetic that we might call the industrial or infrastructural sublime.1 Yet in River of Fundament, Barney’s most recent film, it is precisely this industrial sublime that forges an unmistakable link between the two.

While Barney has long been concerned with architecture and the built environment, River of Fundament at times appears to be quoting directly from Burtynsky’s photographs. Rather than raising questions of influence, however, I wish to suggest that this visual correspondence indicates that the two artists have something deeply in common: a shared ecological vision tied to an interest in infrastructure, monument, ritual, and deep historical time. Burtynsky and Barney ultimately offer similar responses to the same historical questions: how should humans relate to a natural environment that we have so utterly transformed? And how do we imagine human agency in the Anthropocene?2

The two artists have something deeply in common: a shared ecological vision tied to an interest in infrastructure, ritual, monument, and deep historical time.

River of Fundament is a dense and confounding six-hour film. Co-directed by Barney and composer Jonathan Bepler, it is a loose adaptation of Norman Mailer’s 1983 novel Ancient Evenings.  Much has been made of Barney drawing inspiration from this novel. In The New Republic, for example, Jed Perl describes the novel as a “pathologically self-indulgent exercise in historical fiction, almost universally reviled when first published in 1983.”3 The novel shows Mailer “in the throes of an Ancient Egyptian fever dream,” and Perl comments that this “mythomaniacal” egoism is mimicked, even outdone by Barney. When the film premiered in February 2014, the program included a detailed plot summary: a story of “the death and reincarnation of two principal characters, who take the form of Norman Mailer and an anthropomorphic automobile.” Fair enough.

Among River of Fundament’s principal metaphors is the River of Feces, an underground channel filled with thick brown sludge, the essential passageway from one life into the next. In an interview, Barney explains his attraction to this image and its associations:

In Ancient Evenings, the river is a colon. It’s a river of feces. In order to transform, you have to pass back through that river, the fundament. The way the novel transposes the body and the landscape is one thing that attracted me to it. Bodily functions are interchangeable with the primordial ooze of the earth.4

Throughout the film, this primordial ooze is repeatedly associated with urban metabolisms: infrastructure networks like canals, aqueducts, dry docks, oil wells, highways, and others. As Andy Battaglia notes in The Paris Review Daily, “the notion of cities as natural machines for living, in all their grotesquerie and pageantry and gasping for air, figures as one of River of Fundament’s prevailing themes.” Barney’s contribution to the industrial sublime is to foreground modernity’s intestinal features.

More familiar urban mythologies underlie the film as well. The scene of Mailer’s wake takes place in his family’s Brooklyn Heights brownstone, evoking New York City’s cult of the intellectual. In Los Angeles, an elaborate musical ritual is staged at a used-car dealership, evoking the city’s cult of the automobile. Another musical ritual is staged on barges in the Detroit River, evoking the cult of aestheticized postindustrial decay. Barney tells Battaglia that this interest in urban symbology is partly inspired by his studio’s location on the East River. “Once I started exploring the water,” he says, “it changed my perspective on the city as a natural landscape.” But what exactly does Barney mean by natural here?

Tellingly, the final moments of the film are spent tracing the Columbia River basin through Idaho and Oregon, a serene montage of steep cliffs, evergreen forests, and pristine river flow. We’ve left the River of Feces and the iridescent urban canals for mountain country. This closing sequence is more than just a tonic to an exhausting film, it is a love song for a river system in which human engineering and nature seem to coexist without turning into filth. The images emphasize a range of technological interventions—a hydroelectric dam, a salmon ladder, and a dramatic cantilevered bridge where the Columbia empties into the Pacific Ocean. As Richard White famously demonstrated, the Columbia is not virgin nature but an “organic machine” in which human and natural history are permanently intertwined through “energy and work.”5 Canada’s Columbia Basin Trust describes it as “one of the most hydroelectrically developed river systems in the world, with more than 470 dams on the mainstem and tributaries.”6

This vision is optimistic and progressive rather than mournful or nostalgic, and it offers an interesting comparison to the conclusion of Edward Burtynsky’s recent collaboration with filmmaker Jennifer Baichwal, Watermark (2013). Those attempting a comparison of these two aquatic films should proceed with caution: Watermark is an earnest, observational, 90-minute work of nonfiction, occupying a different genre space than Barney’s six-hour, densely layered musical-fiction. For all their differences, however, a shared visual, conceptual, and ideological vocabulary clearly emerges.

In his artist’s statement about Watermark and its related photo-exhibition, Water (2013), Burtynsky describes his urge to “understand water: what it is, and what it leaves behind when we’re gone. I wanted to understand our use and misuse of it.” Accordingly, Watermark is a globetrotting work with a remarkable capacity to jump scale. It migrates between intense detail and sweeping aerial perspectives, from the intimate labors of a husband and wife on a Chinese abalone farm to the depletion of an entire Texas aquifer. Baichwal describes the film as “all about a kind of dialectic between scale and detail,” which the filmmakers realize through fluid, associative editing and an exploratory narrative structure.

Like River of Fundament, Watermark centrally features a highly contaminated river—filled not with human excrement but with industrial byproducts. An early scene in Dhaka focuses on a large leather tannery, a water-intensive operation that releases slimy waste directly into tributaries of the Ganges. “Nothing happens without chemicals at any stage of tanning,” a factory manager tells the camera, before we see a web of purplish-brown streams carving their way towards the main stem.

In Barney and Bepler’s film, the River of Feces is a ritual passageway that the Norman Mailer figures must repeatedly traverse. In Watermark, Burtynsky and Baichwal spotlight the Ganges as an actually existing river where waste and ritual are deeply intertwined as well. Near the end of the film, an extended scene observes the Kumbh Mela, a Hindu pilgrimage at the confluence of the Ganges and Yamuna Rivers in Allahabad, India. Millions of pilgrims—according to some estimates as many as 30 million in one day—travel to the same region for a ritual bath. The film highlights pilgrims across age, class, and social relationships, thus complicating the pollution narrative with an intensely affirmative, almost transcendent moment.

In an essay on Baichwal and Burtynsky’s previous collaboration, Manufactured Landscapes (2006), Gerda Cammaer argues that Baichwal and the moving image help to shift Burtynsky from “a rather ‘neutral’ view of ecological disasters as high art” into the realm of social documentary.7 She argues that Burtynsky’s spectacularization of the landscape privileges aesthetic grandeur over all else, suppressing ethical and ecological readings. Yet Watermark’s multifaceted portrait of the Ganges demonstrates that this tension—between waste or destruction and exaltation—is by no means Burtynsky’s invention.

In all of Burtynsky’s photographs, there is a tension between “the awe” and “the awful.”

Perhaps the most uncanny similarity between these two films comes in their final moments. Like River of Fundament, Watermark concludes with an aerial tracking shot of a river in the Pacific Northwest—in this case, the Stikine River in British Columbia. This prehuman splendor is a stark reversal of the film’s introduction, in which a propulsive fountain of silted water is released from China’s Xiaolangdi Dam. That opening scene is also intercut with the parched mudflats of the Colorado River Delta, a rich ecosystem that engineering structures like the Hoover Dam have destroyed. While the opening sequence illustrates both the awesomeness and the destructive horror of hydraulic engineering, the concluding shot of the Stikine illustrates what will be lost if we don’t take better care.

Cammaer notes that in all of Burtynsky’s photographs, there is a tension between “the awe” and “the awful.” Taking the observation a step further, she argues that the grandeur and perfectionism of his images generally enlarge the gap between object and observer. Whether or not this is true—that Burtynsky’s industrial sublime blunts his photos’ punctum—another reading is also possible. As Brian Kuan Wood comments, in these days of accelerating climate change, “the distance between the observer and the disaster has disappeared.”8 The idea that we can merely observe ecological transformations and intervene to reverse them may be utterly naive.

In a blog post earlier this year, anthropologist Dominic Boyer poses a blunt question about the human sciences: “Why is everyone going infrastructural?”9 Boyer has several theories, but it is his final thesis that is most relevant here: the turn toward infrastructure is a confident answer to the question of where “we go conceptually and theoretically in the Anthropocene.” Barney and Burtynsky indicate that infrastructure is also an answer to the question of where we go aesthetically in the Anthropocene. Infrastructure allows these artists to confront the paradoxical nature of a geologic epoch defined by human influence—one in which we are in command without being in control. This paradox prods them to take nonhuman environments and systems far more seriously than others have done before, while also reconsidering our role in these systems. To differing degrees, Watermark and River of Fundament both demonstrate an ambivalent sense of human exceptionalism, confronting ecological crisis through the grand material-symbolic artifacts of civilization.

The author wishes to acknowledge Alex Chohlas-Wood, Phoebe d’Heurle, Diana Kamin, Shannon Mattern, and Nicole Starosielski for their insightful comments on this essay. 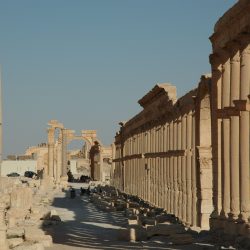